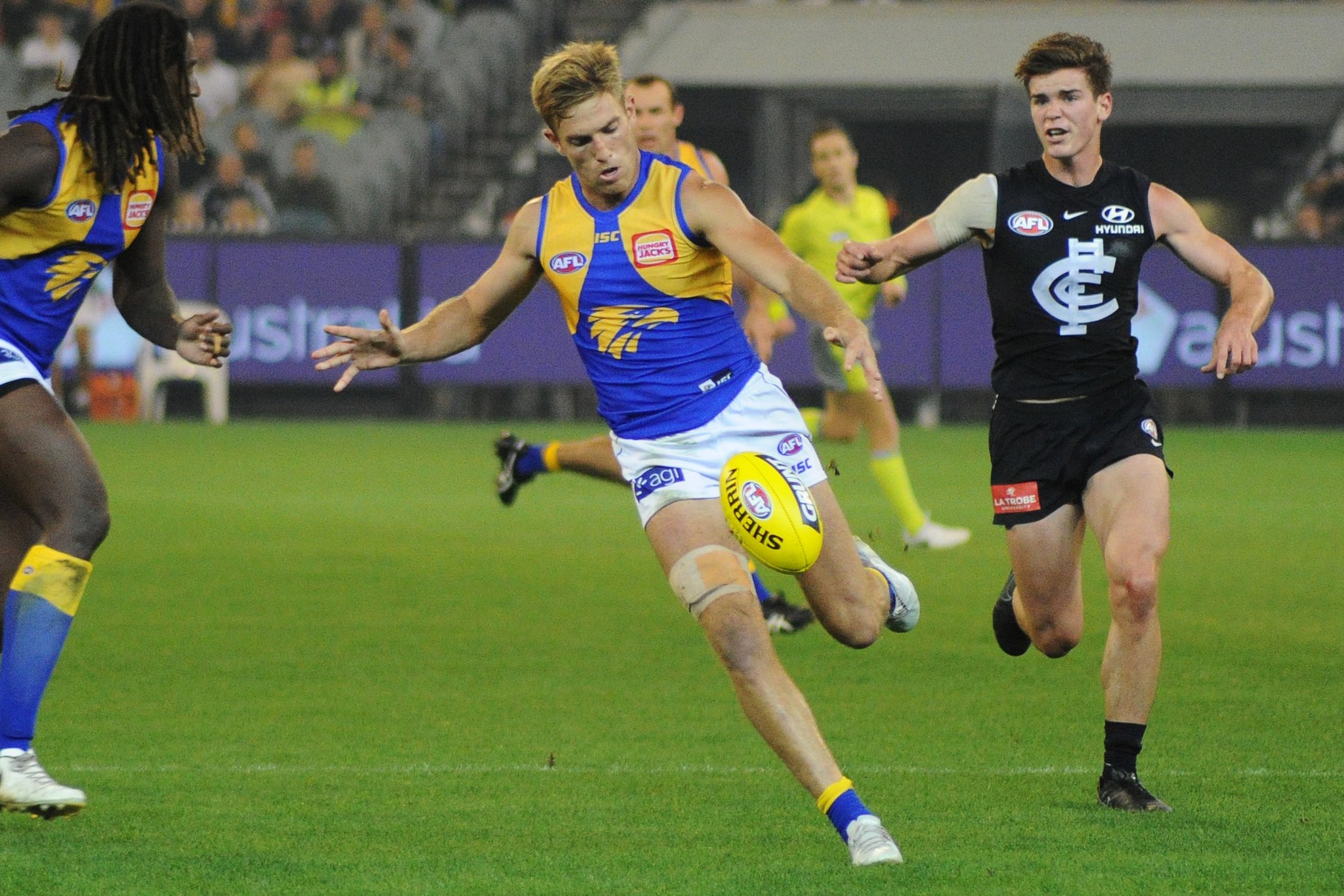 Brad Sheppard, Liam Ryan, and Nic Naituani all bag a blazer at this year’s awards ceremony.

Last night, the trio of Eagles got the call up to this year’s All-Australian squad.

Liam Ryan and Brad Sheppard received their first All-Australian blazers, with Nic Naitanui picking up the second of his career, which has been a long time coming for Naitanui who received his last blazer 8 years ago in 2012.

Now 2-time All-Australian ruckman, Nic Naitanui has had an outstanding season making a whopping 471 hit-outs, with 138 of those being hit-outs to the Eagles advantage, giving the West Coast possession in some vital games, putting the team on the attacking front foot.

Ranked 4th for the most hit-outs this season, the 6’7” ruckman made the decision easy for this year’s All-Australian selectors, practically strolling into the ruckman spot. He has not only dominated the ruck contest but gets around the pitch far more than most other rucks and is almost always in the thick of the Eagles attack, notching up 56 inside 50s this season.

Naituani is a force to be reckoned with in the Eagles attacking quiver and hopefully can continue his fine run of form to take the Eagles to this year’s grand final after missing out on the 2018 finals win.

Brad Sheppard is another Eagle who unfortunately missed out on the 2018 finals win after tearing his hamstring during the finals campaign but has since recovered and has shone over the past two seasons stepping up to become the spoil merchant of the Eagles defence.

Coming up against him is an attacker’s nightmare, tackling everything in sight, contesting and making marks all over the pitch, and spoiling attacks all around the oval.

“It’s not been one year. It’s been several years. He (Sheppard) represents what we’re about, Shep. He’s hard-working, he’s humble and he turns up every week and gets the job done.”

Adam Simpson speaking in a press conference earlier this week.

Sheppard definitely deserves this award as his work in the defensive line for the Eagles often goes unnoticed.

He is ranked 7th in the AFL for marks, taking 107 marks this year, and has certainly gotten the Eagles out of some sticky situations in the absence of Jeremy McGovern. Sheppard also poses an attacking threat too, kicking some wicked goals from open play this year and has an 84.9% kicking efficiency, meaning he’s dead accurate when it comes to retaining possession and starting attacks.

And his work rate is excellent, watching him cover ground against Richmond and St Kilda, intercepting passes, and generally being a nuisance to attackers is why he absolutely deserves his All-Australian call up this year.

Like Sheppard, Liam Ryan is also no stranger to tormenting his opposition, only at the other end of the pitch. The excitement machine is evolving into the complete forward, with Ryan playing all over the forward line this year, and not just scoring goals, but using his fancy footwork to step around defenders to play in his teammates.

“Liam has taken his game to another level. He has added strings to his bow. And he has turned games for us, without a lot of support.”

Adam Simpson speaking in a press conference earlier this week.

He’s notched up 95 score involvements and is ranked 6th in the league this season, setting up a ton of goals for his side this year. And if there was ever a guy who could start a fire in an igloo with nothing but snow, its this man, dazzling us with his wicked pace to create chances from absolutely nowhere.

Ryan is ranked 11th in the league for marks inside 50 and has certainly kept us guessing at what he’s going to do next, pulling off numerous jaw-dropping grabs this season. Plus he is accurate in front of goal too and has kicked some vital goals for the Eagle’s this season, notching an impressive 25 goals, averaging 1.5 goals a game.

He is a real game-changer and has swung numerous games for the side this year, either pulling off an incredible mark, scoring an impossible goal, or creating an assist for another teammate else. He has been a joy to watch and after signing a two-year contract extension, Eagles fans will be excited to see Liam Ryan flyin’ through the air at the Optus for the next two seasons.

“I can’t wait to play back home, they get us going. Hopefully, we’ll put a little show on for em’”

Unfortunately, Eagles midfielder Andrew Gaff just missed out on a spot in the final 22 man squad, after being selected in the initial shortlist.

Both Gaff and Naituani have had an awesome season in midfield for the Eagles, forming a roving ball-winning unit alongside Tim Kelly and Luke Shuey.

Alongside Ryan, Josh Kennedy and Jack Darling have also been notching some impressive goals this year, with Kennedy racking a haul of 31 goals coming 4th in the Coleman medal race, and Darling coming in 9th on 27 goals.

Hopefully, they can keep up their goalkicking form ahead of this year’s final campaign which kicks off against Collingwood on Saturday 3rd October at the Optus Stadium.