In Come The Big Guns 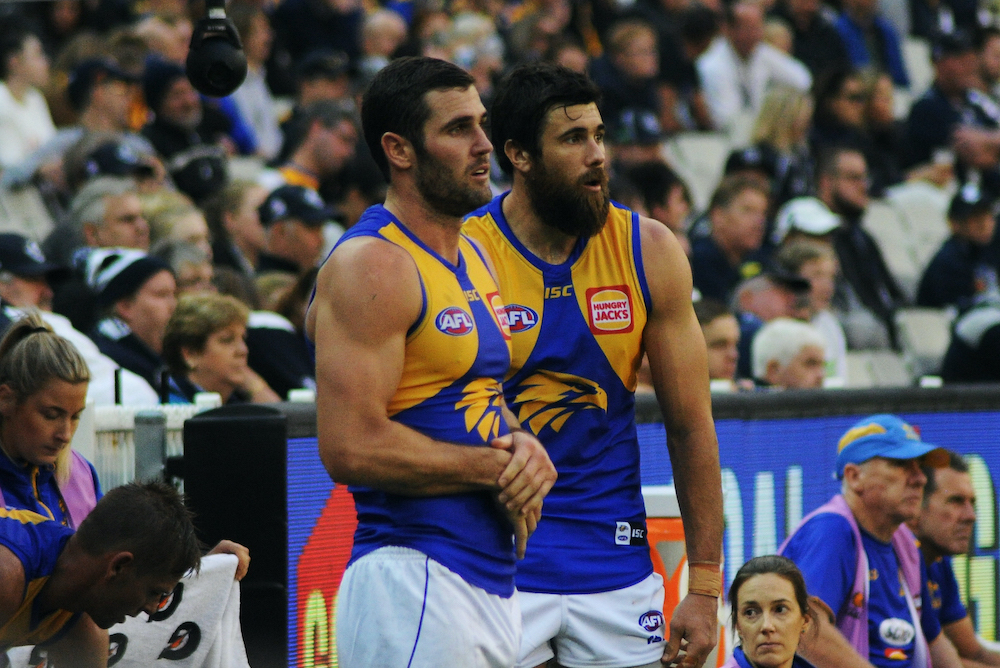 Great news for the West Coast as six of their best are set to return for this weekend’s elimination final match-up.

A raft of experience will come back into the side with, Luke Shuey, Josh Kennedy, and Jeremy McGovern all very likely to feature in Saturday night’s elimination finals match-up.

Goal machine Josh Kennedy is expected to ramp up his training intensity tonight, as the Eagles will take part in a team training session tonight at the Optus Stadium, in preparation for the late kick-off.

The Eagles will take part in a team session tonight at the Optus Stadium, and expect goal-scoring forward Josh Kennedy to ramp up his training intensity after coming back from an ankle injury, suffered in the final game of the season against North Melbourne.

Eagles General Manager, Craig Vozzo confirmed that Kennedy had been the talk of the club last week, after many expressed concern that Kennedy would not make it back in time for this weekend’s elimination finals fixture, after tweaking his ankle in the final game of the season against North Melbourne.

But it looks like the Eagles rehab strategy, not rushing Kennedy back too soon has paid off.

“He’s tracking well. He had a light week as we discussed last week and did a bit more change of direction yesterday” said Vozzo speaking on westcoasteagles.com.

“He’ll ramp up full training tomorrow. Expect him to get through that and be available, so exciting news.”

And at the other end of the pitch its good news also for the interception machine Jeremy McGovern who after a 23-day injury lay-off, looks to have recovered well from his hamstring strain.

“Jeremy has passed all the tests our (strength and conditioning) and rehab staff have asked of him to this point in time,” Vozzo said.

Vozzo confirmed like Kennedy that tonight’s training session will also stand as a final fitness test for McGovern who will then be eligible for selection on Saturday.

But captain, Luke Shuey has had the longest lay-off of the six returning players, spending 33 days on the sideline after suffering a double hamstring strain against Essendon in round 15.

And along with tagger Mark Hutchings, it looks like the midfield duo are “raring to go,” with the club again taking a conservative approach to not rush anything until both players get through tonight’s training session.

“Luke Shuey and Mark Hutchings both signed-off on some high speed running last week, which was terrific. They’re raring to go. We’re holding both back. They’re very confident in where they’re at,” said Vozzo.

Jack Redden is also set to return this weekend after undergoing surgery on a thumb injury that has seen the player sit out since the tie against the Bulldogs on 6th September.

Redden has done very well to come back from this setback so quickly, after we feared he could be out for the remainder of the season, depending on how his surgery went.

Thankfully, Vozzo also confirmed Redden had been “tracking really well” after having a plate inserted into his hand three weeks ago.

“We’re expecting he’ll be available to play with a guard and he’ll do some more contact training tomorrow night,” said Vozzo.

And here’s hoping he’ll be lining up in the midfield with Lewis Jetta, who has recovered from a recurring calf strain problem which flared up after the game against the Dogs.

“Lewis the old calf strain. He’s had those from time to time. Not so many for a while but with the extra week it’s been great.”

“He’s flying on the track, high-speed running is through the roof, and expect him to be available for selection.”

Jamie Cripps will also return to the side after taking time away from the pitch for the birth of his son.

With this abundance of experience coming in for the finals, the Eagles stand a very good chance of getting past the first round against a gutsy Collingwood side who will throw the kitchen sink at the West Coast on Saturday.

But one concern was raised to Adam Simpson during his interview on ABC Radio last week that bringing in this many players, who have been on the periphery of the side for a couple of weeks, could upset the balance of the team.

Simpson acknowledged this but confirmed this wasn’t a worry for him, “the guys we’ve got returning are all pros and know what the dynamics need to be. There is a risk, but it’s definitely a risk we’re willing to take.”

Yes, there is a risk, but some of these players have only been in the treatment room for 4-weeks maximum. Plus they have spent the majority of that time with the team in the Queensland hub, so we doubt that the six seasoned professionals coming back in won’t upset the dynamics of the matchday squad.

In fact, their return will assuredly give the team a huge lift. Having this wealth of talent and experience coming back into the side can only really be a huge positive for the eagles.

How do we expect the Eagles to line up against the Pies on Saturday?

With a flood of midfielders coming back into action, Adam Simpson is spoilt for choice for the first time in the last 6 weeks.

With Redden, Shuey, Jetta, and Hutchings all returning to the squad it’ll be interesting to see how Simpson arranges his midfield. But we’re predicting a few certainties.

The full-back line will remain unchanged from last week against North Melbourne, with Brad Sheppard, Tom Barrass, and Tom Cole guarding the sticks at the back.

Jeremy McGovern will come in to replace recent retiree Will Schofield at the central half-back position, and Gov will be flanked by grafter Shannon Hurn on his right and Liam Duggan on his left.

Andrew Gaff will then move into the central midfield spot, with Dom Sheed and Jake Waterman lining up on his left and right wings.

Up top, Jack Petruccelle and Josh Rotham will vacate their positions in the half-forward flanks and will be replaced by Jaime Cripps and Brendon Ah Chee. Jack Darling will lead the trio in the central half-forward position.

And we expect the full-forward line to remain unchanged from North Melbourne, with Liam Ryan, Josh Kennedy, and Oscar Allen spearheading the attack.

Jackson Nelson, Jack Redden, Mark Hutchings, and Lewis Jetta are expected to start on the bench.

Let us know what you think of our predictions in the comments below!

Featured Image Credit: Jack Darling and Josh Kennedy on the bench during the AFL round five match between Carlton and West Coast on 21 April 2018 // Flickerd // (https://commons.wikimedia.org/wiki/File:Jack_Darling_and_Josh_Kennedy_on_the_bench.jpg) // CC BY-SA (https://creativecommons.org/licenses/by-sa/4.0)Download permissions