Schoey’s Got His Eyes On The Prize 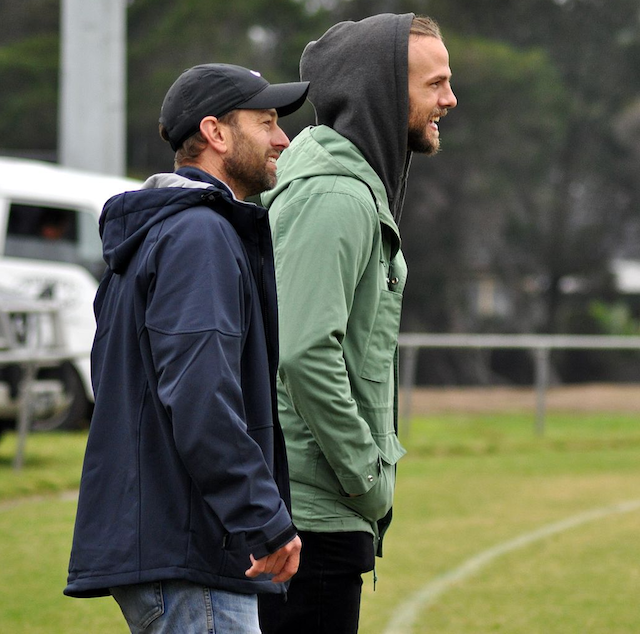 Will Schofield spoke with Dwayne Russell on all things from playing in front of fans, a future in broadcasting, and players returning this weekend for Collingwood.

After announcing he was hanging up his boots last week, Will Schofield only has one thing on his mind and that’s this weekend’s elimination final against Collingwood.

Dwayne Russell tried hard on his talk show, Dwayne’s World, to squeeze an answer out of Schofield on what life after football is going to look like for the defender, but it seems Schoey isn’t looking past Saturday evening’s game.

“If you’re not, you’re not in the right game, you’ve gotta have the mindset of winning and winning means advancing.”

“There’s going to be some stuff thrown up after winning your first final, but you’ve gotta win it first.”

As usual, great to chat with @_DwayneRussell – the Dwayne & Schoey Show, got a nice ring to it 😉 https://t.co/43oNYdcKoh

With the first final now 3 days away, Schofield already has his game face on and is ready for battle.

“That’s where the motivation comes from. The extra motivation is winning and playing more finals. Well, it is for me. It’s what I’ve lived for my career, playing finals footy.”

Saturday’s game at the Optus will be the defender’s last run out at home, and could also be Schoey’s final game in an Eagles jumper, should the boys not get the win against the Pies.

Schoey looked back on his career during the interview and admitted that the finals really are the pinnacle of any footy player’s career.

“I was lucky enough to win (a premiership) a couple of years ago, but those flags are bloody hard to come by and you want to make sure you make the most of it every year.”

This season has been particularly tough for Schoey, who has had to battle his way back into the side after headbutting Port Adelaide’s Zak Butters back in June, copping a one-match suspension and having to prove himself to the coaches to get back into the squad.

“That incident was out of character for me, I took it personally and felt like I let the team down which wasn’t something that I’ve done too much in the past either.”

“I went away and worked pretty hard, and fought pretty hard for my spot back in the team.”

And he has shown that commitment to the team, playing out of his skin in the recent games he’s featured in, becoming an integral part of a robust Eagles defence that has dragged the side through some must-win games this year.

“To come back into the team at the back part of the year, to play a role, which is hopefully what I’ve done for the most part of my career, has been pleasing.”

The defender is one of those players who just loves being part of the team. The away days, the time with the lads, and the footy lifestyle, he just loves the game and will be missed on and off the field at the club.

But that aside Schoey has his eyes on the prize and knows already how much this game means for the club.

“I usually gauge how the feel of the games are going by how many text messages I get for tickets and how early in the week they are, and it’s fair to say I’ve had a few this week, and a few from people I that haven’t really spoken to me this year.”

“That’s usually a good guide to how popular the game’s gunna be.”

“We’re just looking forward to Collingwood, we’ve been waiting for finals all year and we can’t wait should be great to play in front of a big crowd at the Optus Stadium.”

The Magpies are no push over’s though and they’ll bring a tough challenge to the West Coast, after battling through their last 10 games, going 5-5 to finish 8th in the ladder.

And despite the demolition job the Eagles did on the Pies in round 8, battering them by a 66 point margin, Schoey knows the team will need to afford the Pies a great deal of respect if they are to come away with a win on Saturday.

“I think week 8 seems like a long long time ago and like any team, we’ll be looking at their recent form and what they’ve been doing against teams leading into finals, that’ll be most relevant.”

“Collingwood’s been a good team for a long time, and they’ll back their own brand of footy.”

But Schofield will be on tender hooks this Thursday and Friday with hopes that he can get a call up to the side himself.

“I’ll be waiting on selection thursday and friday like everyone else.”

“From my pov its great to be part of the backline again.”

Hopefully we’ll see him tearing it up for one last time at the Optus on Saturday night.