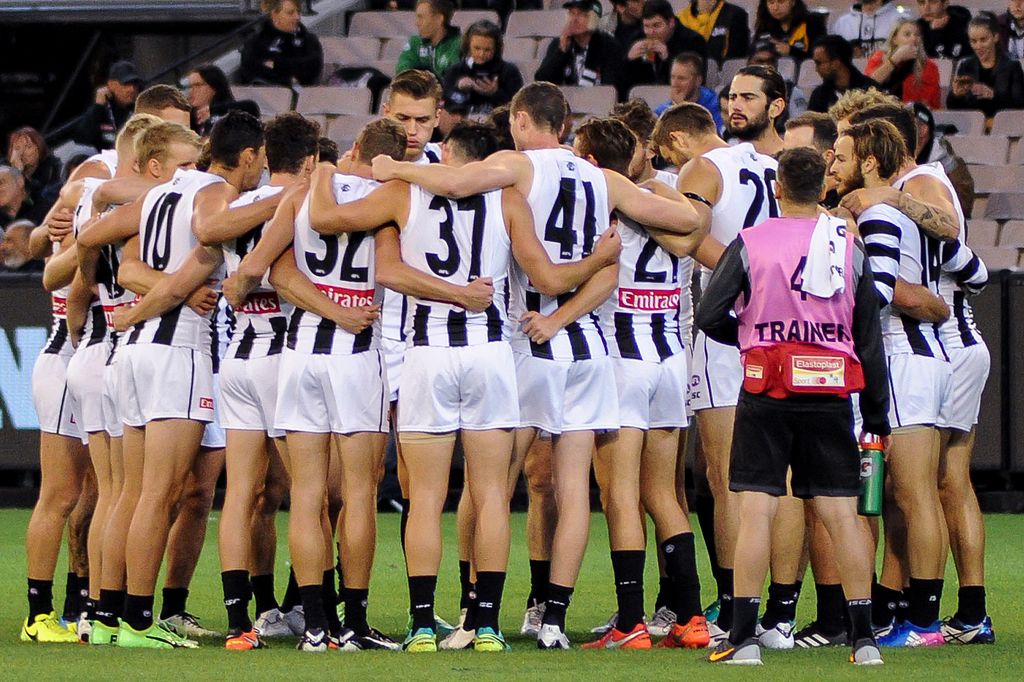 Collingwood have parked up in Perth ahead of this Saturday’s do-or-die elimination final against the West Coast.

It’s trailer park chaos down in Perth this week.

Ahead of this week’s elimination final between the West Coast and Collingwood, the Magpies have rocked up to the Joondalup Resort in Perth in a fleet of caravans.

In a bizarre year of footy, things just keep getting weirder and weirder.

Although, there’s a pretty valid excuse for the trailer park tribulations Collingwood are going through.

With Western Australia’s current COVID-19 restrictions WA Police have pulled out the rule book on both the Eagles and Collingwood, ahead of their 2020 elimination finals fixture on Saturday.

Both teams traveled into WA in the last two weeks from their respective Queensland and Adelaide hubs, and in the interest of safety, WA officials have imposed a strict one person per room rule on the visiting Collingwood team, with players and staff having to each occupy their own rooms.

Unfortunately for some of the Pies backroom staff, there’s not enough room at the inn, with the club having to hire several caravans to house the whole traveling party.

Although it’s not as though the Pies will be slumming it in a ‘camper van prison cell’ as some media outlets have called it.

No, the Joondalup plays host to a 27-hole championship golf course, multiple cafes and restaurants, and an outdoor lagoon-styled swimming pool.

It sounds like a pretty nice deal to us.

Even Pies coach Nathan Buckley joked before his press conference saying, “sorry I’m late, it’s a bit of a walk from the caravans,” adding, “only joking, I wouldn’t be in a caravan.”

The good news for the Pies is that there will be no caravans for their players who will be getting their full 8 hours kip ahead of a tough matchup against the Eagles, with the Pies Backroom staff taking up the caravans.

And putting all jokes aside, you do feel a little for Collingwood, who have spent almost the whole season on the road, with the COVID-19 sanctions and fixture curtailments, meaning that the Victorian team have seriously struggled since the restart.

The seventh hole of the Joondalup Resort Golf Couse, Perth.

We looked back to our predictions at the start of the year and after the first three games, we had the Magpies down as a top 4 contender. Heck, we even thought they could go all the way.

Collingwood went on a stormer during the opening rounds of the season, demolishing the Bulldogs by a 52 point deficit, narrowly drawing to 2019 premiers Richmond, and taking out the Saints by 44 points.

Amid these fixtures, AFL went into an extended 3-month break, with Collingwood returning after the restart, winning just two games before they went into meltdown, managing to hobble their way up the ladder, losing 7 out of 13 of their remaining fixtures.

On-field it looks as though their game plan of defend, defend, defend, hasn’t allowed them to push for the heights that we thought they’d reach, ranking 13th in the league this season for points scored.

Losing marquee defender Jeremy Howe was a huge loss early on in the season for the pies. Howe suffered a nasty PCL injury in round 4 and has been ruled out for the whole season.

They’ve also missed their kicking threat Jordan De Goey, who’s been absent from the side for most of the year, sustaining a finger injury during their round 7 win against Geelong, where De Goey belted 5 goals past the Cats.

Meanwhile, Collingwood have also had a pretty fatiguing season, being one of the worst-hit sides during this season’s fixture cram. The Pies ended up playing four games in three different states over 13 days.

And it’s no wonder the Pies looked a little slow to keep up with Port Adelaide’s pace during their round 18 loss.

Things haven’t gone right for Collingwood off the pitch either.

In a turbulent season away from home, the Pies have suffered a number of damaging COVID-19 sanctions, for a series of rule breaches that cost the Pies a couple of hefty fines, and saw their vice-captain, Steele Sidebottom, cop a four-week suspension at the start of the season.

The suspension was harsh and inconsistent by the AFL, who failed to adjudicate a couple of other similar incidents in the league with the same gravity.

That aside, Sidebottom will now miss this year’s finals run-in after returning home to Victoria for the birth of his daughter.

But it’s not all been bad for the Pies, as they’ve taken some pretty big scalps this year, the most recent being their 68-46 win against the Gold Coast at the beginning of August with De Goey coming back from injury to kick 4 goals against the Suns.

Tim Kelly in action for the Eagles in Round 8 against the Magpies.

And the Pies certainly do know how to win the ball back in defence, with Jack Crisp and Jordan Roughead doing a pretty solid job at the back for the Pies, spoiling attacks and keeping Collingwood’s average points loss down to a modest 43.3 points per game.

And its a pretty well known fact that good defences are what win you flags.

But it’s not just Collingwood who have had a hard time though.

Everyone’s had to deal with their fair share of problems this season, with the West Coast being one of the worst-hit teams for injuries. At one stage of the season, the Eagles were down to their bare bones with a whopping 14 players in the treatment room.

Yet, the Pies with their never-say-die attitude will look turn this adversity into motivation to take the game to the West Coast. Speaking with SEN’s Gerard Whateley, Nathan Buckley hit the nail on the head stating, “maybe being elite is just making the best of your circumstances at any given time, because there are different things that are thrown in front of you at different times.”

This goes for the West Coast too, as although the Eagles haven’t dealt with the same off-field chaos as the Pies, on-field events combined with the everchanging hub life, hasn’t been plain sailing for the Eagles either.

The tumultuous year has taken its toll right across the AFL, but it seems, as always, the Magpies will still be looking to throw the kitchen sink at the West Coast on Saturday night.

“We have been asked to do it a bit differently. But right here, right now it’s a good opportunity to narrow the focus with a small group that needs to get the job done on Saturday night.”

What with caravans and season curtailments, Collingwood will need to score early and keep the pressure on the West Coast if they are to motor-home to a win this Saturday night at the Optus.