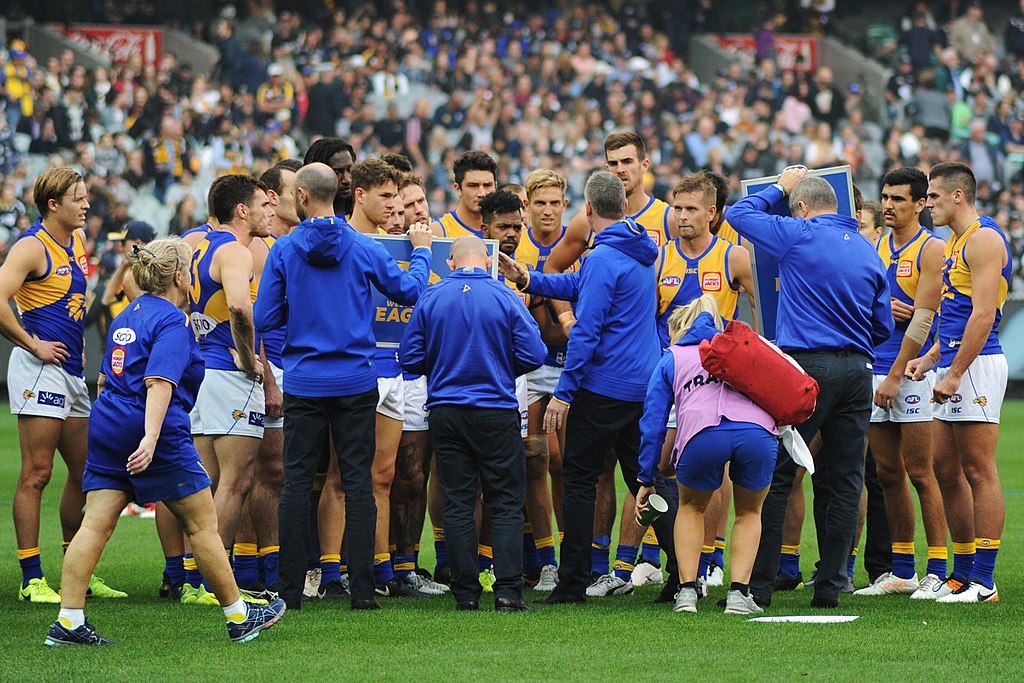 The Magpies will advance to play Geelong in next week’s semi-final after beating the Eagles by one point.

In a weekend of finals thrillers, Collingwood and the West Coast put on another show for us.

But despite the electric end-to-end footy on show, it was a sour end to the season for the West Coast, who’s finals campaign was cut unduly short by a gritty Collingwood side, upsetting the odds to edge the Eagles by the finest of margins, 12.5 (76) to 11.9 (75).

The roof went off on the Optus tonight, and it was great to see fans back in the stadium who played their part to help the Eagles keep the scoreboard ticking over in the latter parts of the game.

But it was an aggressive Collingwood side who showed up to keep the Eagles quiet for a large percentage of the first half, an alter ego of the team we saw the Eagles obliterate in round 8.

The Eagles left it all to do late on, and almost replicated their last minute win in the 2018 grand final, mounting an impressive comeback in the final three minutes of the game.

And the West Coast struggled to cope with Nathan Buckley’s high-pressure, ‘stick it up the jumper’ game plan. The Eagles also failed to convert some from some fairly easy chances despite taking 10 marks inside 50 throughout the match.

Pies tagger Levi Greenwood, dominated the midfield and shut down Eagle’s ball winner Tim Kelly throughout the game. Kelly was almost nullified and struggled to get his hands on the footy, recording only one possession in the first quarter.

But it was was the accurate forward, Jack Darling, who took the first blood, with Liam Duggan intercepting a Collingwood clearance high up the pitch and offloaded to Darling to set him up for his first of the night.

Duggan and Shannon Hurn had a lot to deal with in the first half, and like batman and robin they interchanged well as a partnership, with Duggo roving round the back taking 3 marks in the first quarter, and Hurn staying back to clear the ball away from the danger zone, making 3 rebound 50s.

It was also good to see Jeremy McGovern dominating at the back again, taking multiple intercepted marks in the first quarter but it was his error that led to the Pies opening score of the game, deliberately taking the ball out of play, conceding a free which allowed Mason Cox capitalise from.

And after realising McGovern would be plucking every high ball out the air tonight, the Pies changed their game plan to kick deeper, and shallower and started hitting their 6’11” target man Cox, who beat 2 defenders to the ball to get Collingwood’s second of the night.

Cox wasn’t finished there though, reaching into the sky to pluck out a grab from Adam Treloar, with the American man-mountain shrugging off Tom Barrass to get his hattrick.

The pressure was all on the Eagles, and the Pies took it too them once again forcing Duggan to spray out a poor clearance down the centre of the ground, landing right in Taylor Adams’ bread bin just outside the 50.

What was an easy kick on goal was made even easier after Oscar Allen carelessly struck Adams high on the face after the mark was taken.

Adams marched forwards 50 metres on the resulting kick and slotted the Magpies 4th in a row.

The Magpies were well on top of the Eagles in the first, putting through 14 inside 50s in the first quarter, with Mason Cox causing havoc on the Eagles defence in the deep forward position.

Plus the Eagles midfield of Dom Sheed, Luke Shuey, and Tim Kelly were almost non-existent in the first quarter, recording just 2 disposals between them.

But it was the Eagles ability to score from the centre bounce that helped them to break the scoring drought with Nic Naitanui hitting out to Kelly who booted low to kicking machine Josh Kennedy, who got the Eagles moving in the second quarter.

This was only Kelly’s second touch of the game, showing how much Levi Greenwood dominated the first quarter.

Capitalising on an advanced eagles field, the Pies strung together a neat bit of handball play with Treloar and Hoskin-Elliot disposing the footy to Jaidyn Stephenson, who earnt a free-kick on the flanks after copping a high tackle from Shannon Hurn. Stephenson converted and put the Pies ahead.

The West Coast hit back, with Oscar Allen winning the centre bounce, getting the ball up to Brendon Ah Chee, who sold a nice bit of candy to get the ball away to Tim Kelly who booted inside the 50 to Josh Kennedy, who brought the Eagles scoreboard up to 20 points.

But it was Ryan’s battle with Brayden Maynard that will grab the headlines. The two were fighting like cat and dog all game, putting some big hits in one eachother, contesting possessions, and getting under each other’s skin. It was Ryan though who had the edge, beating Maynard to a mark on the edge of the Pies’ 50, juggling the ball, and turning to give Maynard a wry smile.

The second quarter was just pure excitement and the ball went coast to coast with both sides playing some frantic footy.

The Pies took the first advantage, flooding the Eagles 50, making multiple big tackles to win a free-kick in front of the posts. Jamie Elliott put the resulting kick over giving the Pies some breathing space.

Jack Darling, imperious under the high ball today, took a huge bomb from Andrew Gaff, to bring the score within 4 points, 45 seconds out from the half.

Coming back from injury meant it took Luke Shuey some time to find his rhythm, but he came into the game slowly to help the Eagles dominate at the centre bounce, winning the ball back on multiple occasions to record 5 score involvements in the game.

Pies ruckman, Brody Grundy didn’t start the second half, which perhaps was a mistake on Nathan Buckley’s behalf, as Nic Naitanui won an easy contest at the ruck, got the ball out to Shuey who linked with Kelly, and Cripps to kick upfield to find Oscar Allen who got the Eagles off to a sharp start in the second half.

Brad Sheppard did a solid job of keeping pies goal man Jordan De Goey quiet in the first half, but De Goey came into the game in the second making up a part of the devastating attack that took the Eagles apart in the third quarter.

For his first, De Goey took a cute handball from Cox, conned two Eagles defenders with a slick dummy, and took a stab at goal from 50-metres out, getting the Pies rolling in the second half.

Grundy came back onto the field to win the resulting bounce, but the Pies couldn’t keep the possession with Gaff recovering the footy, moving the ball up field to and looping the ball out to Jack Redden and Liam Ryan who played in the new dad Jamie Cripps, who lashed the ball through the sticks.

It was good to see Crippa back in an Eagles jumper, and despite missing a couple of kicks, Cripps was on fire for the Eagles.

With Jack Crisp dispelling some superb build-up play from the West Coast, and McGovern at the other end reaching high to quell the Collingwood attack it was tough for either team to breakthrough in the 3rd.

But De Goey found some space out on the right flank and put in a wonderful kick to set up Hoskin-Elliot, who cracked the scoring drought.

The Pies turned up the heat, with Brody Miocheck beating Shannon Hurn to a mark deep in the Eagles 50, giving the Pies an 11 point lead.

What followed was a crazy bit of play, as though someone had turned gravity off in Perth, with Liam Ryan and Allen literally hanging in the air contesting multiple bombs coming in.

The Eagles trailed by 10 points at the start of the fourth, but they started on the front foot, scoring again from the centre bounce, with Liam Ryan taking the ball inside the 50 to add the 6 points.

Ryan’s goal gave the side some momentum and a string of passes from Darling and Crippa set up Oscar Allen for his second of the night.

The Eagles put together some great play, lumping the pressure on the Pies, but they just couldn’t score after recording 9 inside 50s in the first 6 minutes of the quarter.

And they weren’t so hot at the other end of the pitch in defence either, allowing Brody Mihocek to break the line and curl in a goal in from a tight angle.

With 8 minutes to go, chasing a one-point lead it was do-or-die for the eagles.

And Collingwood came knocking again, with De Goey capitalising from a free-kick, and Mihocek beating Tom Barras and McGovern again to grab his second, increasing the lead.

The West Coast, responded but it was too little too late.

Gaff managed to get himself high up on the Pies flank and put in a heroic tackle, dislodging the ball from Brayden Maynard which was collected by Liam Ryan who played Josh Kennedy in for his third.

With three minutes left on the clock, the Eagles had to score twice to win.

They advanced up the pitch and won a free kick for a high tackle in the last minute of the game. Jack Darling scored and brought the E’s within one point, but it was too little too late.

It was a frantic final 30 seconds of the match, but the Pies held on to win by just a point and will move into the next round of this year’s finals.

“It went down to the wire but unfortunately we didn’t take our chances.” – Adam Simpson in his post match press conference.