West Coast Eagles > News > Analysis > Will He Stay Or Will He Go? What’s In Store Next Year For Josh Kennedy.

Will He Stay Or Will He Go? What’s In Store Next Year For Josh Kennedy. 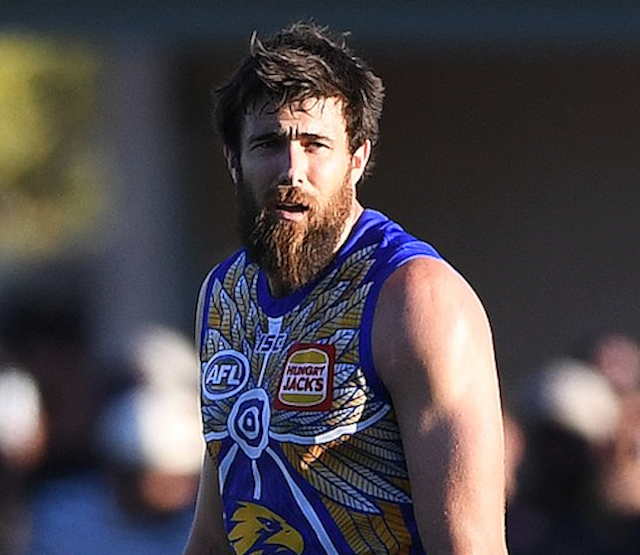 The Eagles full-forward has been speaking to Radio 6PR this week on everything from finals woes, report cards, and life after footy.

With Saturday night’s elimination finals loss to Collingwood still fresh in the mind, Josh Kennedy sounded downcast as he spoke to Steve Mills and Basil Zempilas on Radio 6PR on Monday afternoon.

“It’s over,” he said in anguish and who can blame him for being frustrated.

The 33-year-old Eagles forward left everything out on the pitch on Saturday night playing a vital part in leading the Eagles spirited comeback and scoring a hattrick of goals that helped the Eagles find their momentum in the later stages of the game.

“If you don’t make a grand final, it’s disappointing,” he said, “it’s been a tough year, all clubs are going through the same thing but look, we missed out this week, we had a home final and we missed it, so it’s a bit disappointing.”

Backed to go all the way this year, it was the shock of the weekend seeing an almost full-strength West Coast side go down, at home, to a Magpies team, who were demolished earlier in the season by the Eagles, a game in Josh Kennedy, put seven majors past the Pies.

This weekend’s loss to Collingwood means Kennedy will finish the season with 34 goals to his name and is currently sat second in this year’s Coleman Medal race only to the Cat’s goal machine, Tom Hawkins.

Mills and Zempilas proceeded to give Kennedy his yearly report card which was an A-.

And Kennedy sounded pretty chuffed with the grading, “do you know what Millsy that’s the first A I’ve ever gotten in my life!”

Although we’d have bumped him up a little to an A+, we’re obviously biased, but considering the belter of a year he’s had, scoring a heap of goals, ranking second in the AFL for marks inside 50, and notching 69 score involvements, he’s been invaluable.

We also have to take into account the injuries Kennedy’s come back from, suffering a pretty nasty concussion in round 14 against Richmond, and returning from an ankle injury just on the eve of finals.

He’s a tough bloke, and sure as hell didn’t want to miss out on this year’s finals campaign, revealing part of his speedy ankle recovery was down to a bush medicine made by Liam Ryan’s Auntie.

“I’ve got some stuff from one of Liam (Ryan’s) aunties called Binyaarn oil, so just chucking that on, but really just ice and compression,” Kennedy Spoke to radio 6PR last week.

“She makes this Binyaarn oil I’ve had for the last few years. It’s a lot of stuff from out in the bush but I think there’s a bit of Emu oil through it, it’s a special recipe, so been rubbing that on it flat out.”

Despite being one of the oldest players in the Eagles squad, along with Shannon Hurn, neither player looked out of place on Saturday night, as Hurn tracked up and down the field all game, and Kennedy tormented Pies defenders taking 6 marks during the match.

“They were pretty good. They didn’t look too old tonight.”

And as of Saturday night, both players are now out of contract.

It’s no doubt both ex-Eagles Captains can certainly pull off one more lap, and help the West Coast bag a spot in the next year’s finals, but the ball is in their court and Kennedy wasn’t letting anything slip on Monday when pressed for an answer on his Eagles future.

When asked if he’d signed anything, JK stated, “not yet, still working through a bit of stuff for next year and discussing my options for, I suppose, what’s going to be best for me and the family.”

Kennedy confirmed that the club had already made a contract offer to him, prior to finals, and when asked if negotiations were still taking place, he shut the conversation down fairly quickly saying, “we’re talking.”

“The club have been really great in communications, but it’s just about what’s best for me.”

And it seems like Simmo wants the old guard to stay, “I think both of those guys have done more than enough to look to next year. We’ve got to talk to them and see what they want to do, but we’ll work through that and work through those guys in the next few weeks.”

Although Kennedy was pretty elusive on his future, it seems he’s also looking forward to a life away from footy with “a couple of opportunities popping up” here and there.

But we’re pretty confident we’ll see the 3-time All-Australian sign-on for another year, with Kennedy admitting “I’m keen to play…”