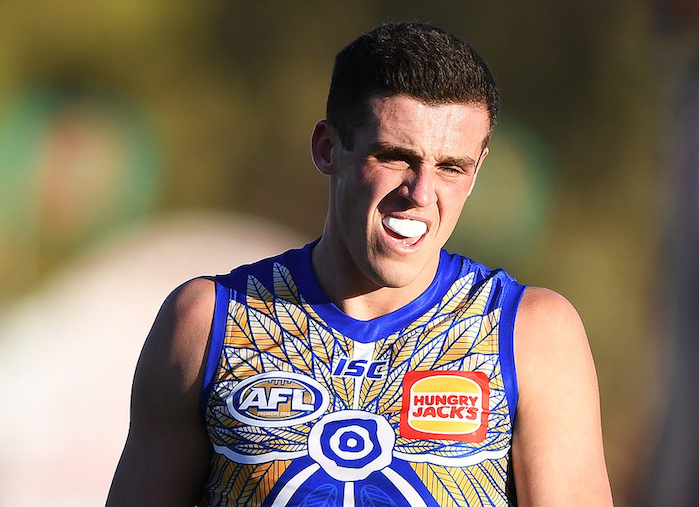 The Eagles forward will stay with the Club until 2023.

The West Coast have re-signed young forward Jake Waterman, in a deal that will keep the goalscorer at the club for another three years.

Waterman joined the West Coast as a 77th round father-son pick during the 2016 national draft.

Jake, son of dual premiership defender, Chris Waterman, has since played 39 games for the Eagles, scoring 37 goals in his time at the club.

After making his debut at the Optus Stadium against Sydney in round one of the 2018 campaign, Waterman excelled in the side, playing in 16 of the sides first 18 games of that premiership-winning season.

He also kicked 13 goals that year and got an AFL Rising Star nomination in round 6, after kicking two goals that helped the West Coast come from behind to defeat Freemantle in the Western derby.

But the young gun’s 2019 year was equally as audacious, after being dropped early on to the reserves, Waterman showed his grit to get back into the first team, kicking 28 goals that year in to become the West Coast’s top goalkicker in the WAFL.

His cracking form in the WAFL earnt him a spot in the first team and Waterman ended up scoring 15 goals in 13 games for the West Coast that season.

“I absolutely love the club and couldn’t picture myself playing anywhere else.”

He is certainly a promising talent, who has come into some great form this year being backed as a replacement for the goal machine Josh Kennedy, who has also this week signed a contract extension along with Shannon Hurn and Andrew Gaff.

It’s safe to say that like Kennedy, Waterman can certainly slot them through the sticks too and is valued at the club as one of their future stars.

“We see him as an important member of the squad going forward and have been very pleased with his development this season.”

But 2020 has been up and down for Waterman. The young forward was coming into some form at the start of the year but ended up missing 4 rounds after breaking his hand in round 11.

He came back though and ground his way into the 22 man squad, with his best performance of the season arguably coming against the Bulldogs in round 16 where Waterman laid a statement down to the Eagles selectors, bagging 2 goals, 14 possessions, and 4 marks.

He has since kept his place in the side, and although we think he’d be more influential playing higher up the field, he has cemented the left-wing position as his own, reaping the rewards for all his hard graft to get a start in Saturday night’s elimination finals match against Collingwood.

“Jake had to earn his spot this season but once he got into the side he showed wholehearted commitment to playing whatever role was necessary for the team to win,” said Craig Vozzo.

Speaking on the young group of players coming through the ranks at the moment, Waterman humbly stated, “I guess we’re the sort of future leaders of the club so we need to start heading in that direction.”

The Eagles number 2 is certainly an exciting prospect and we’re looking forward to seeing what he can do in blue and amber next season.