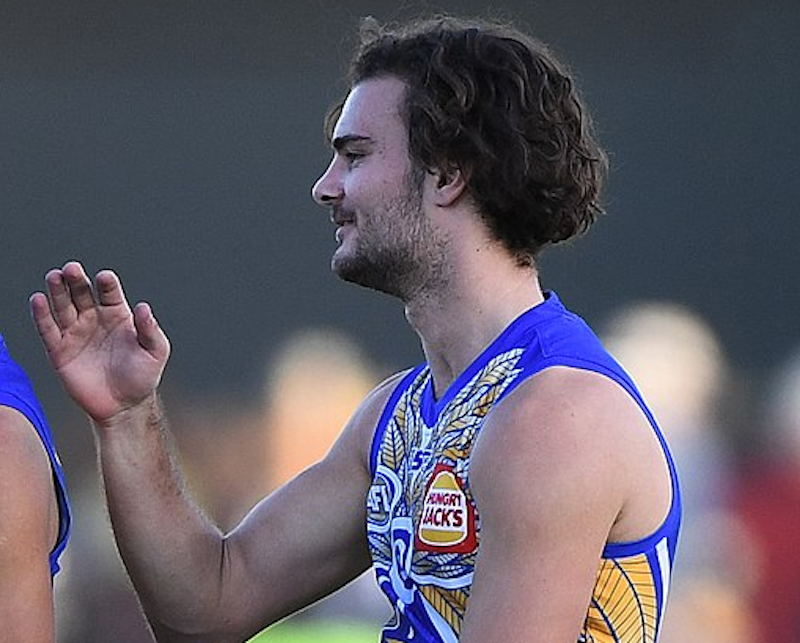 Contracts are coming thick and fast at the West Coast, with four more players agreeing contract extensions with the club.

Speedster, Jack Petruccelle has been awarded a three-year contract extension and will stay with the Eagles until the end of the 2023 season.

The former basketballer set the fastest 20m dash time at the 2017 national draft and subsequently joined the West Coast as pick number 38.

Petruccelle impressed last season, playing 20 games for the Eagles, scoring 21 goals and racked up an average 4 score involvements per game.

But he’s had to sit on the sidelines for the majority of the year after suffering a frustrating hamstring injury this year.

“It was obviously frustrating for Jack to miss a large chunk of the season while he recovered from a serious hamstring issue, but he worked through that and won back his spot towards the end of the year,” West Coast list manager Darren Glass told westcoasteagles.com.

And he bounced back to play in the final three games of the year, getting a start in the round 17 win over St Kilda, and coming off the bench in the elimination finals loss to Collingwood.

“We have seen some really exciting signs from Jack across his three seasons at the club and look forward to him continuing his development,” said Glass.

Petruccelle isn’t the only exciting prospect coming through the Eagles ranks either, with Harry Edwards opting to extend his contract by another two years.

Edwards joined the club as the Eagles first pick in the 2019 draft.

Edwards played the majority of 2019 in the WAFL, playing 12 games for the West Coast’s reserves and racked up some pretty impressive numbers, taking 27 marks, 94 possessions, and 20 Tackles.

But Edwards’ season came to a cruel holt this year after the young defender collided with Brad Sheppard and suffered a nasty concussion on his debut against Geelong in round 9 this year.

“Harry, unfortunately, suffered a concussion early in his first match but showed some good signs prior to that and we are excited to see what he can do as his body matures and he continues to develop.”

2020 debutants Xavier O’Neill and Luke Foley have also both signed on for another year at the club.

The two rookies both made their debuts this year, with O’Neill having a fairytale start to his AFL career, scoring from open play on his debut against GWS in round 13, making 10 disposals, and setting up another goal.

O’Neill was been described as one of the most accurate kickers that have come through the club, after winning the kicking test in the 2018 draft combine and subsequently joining the Eagles as a 28th pick.

Luke Foley also joined the Eagles in 2018 that same year as a 31st pick and worked hard to break into the side, making his debut for the Eagles in round 18 of this year against North Melbourne.

After a couple of position changes, Foley has found himself moving from the midfield to the backline where he showed great form in the WAFL, playing just 16 games for the West Coast reserves in the 2019 season, recording a whopping 35 tackles, 55 marks, 193 disposals, and 3 goals for the side.

“We were thrilled to see Xavier, Harry and Luke play their first games this season. All of our 2017 and ’18 draftees have been exposed to senior football, which is great for their development,” Darran Glass commented.

“Xavier shows plenty of promise as one of our next generation of midfielders, while Luke will take plenty away from playing against North Melbourne in round 18.”

“They will no doubt use that experience to drive their careers forward and we are looking forward to watching them continue to grow next year.”

It’s safe to say, the future looks bright for the Eagles.