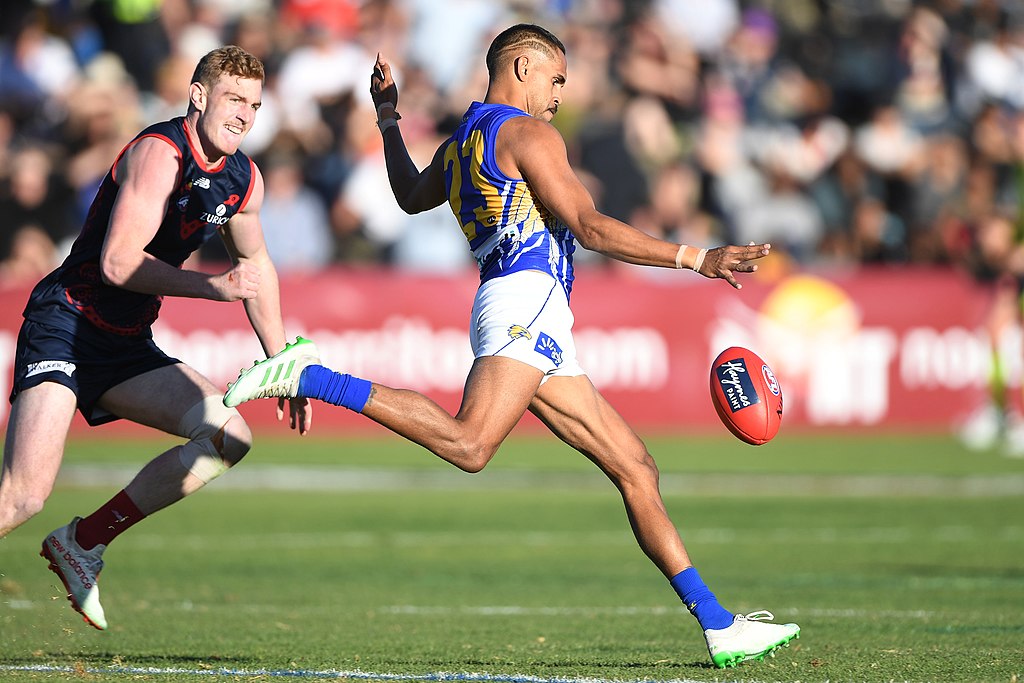 In the wake of a barrage of Eagles re-signings, we are yet to hear an update on the futures of Lewis Jetta and Nathan Vardy.

Signings are coming thick and fast at the West Coast.

Dishing out new deals to 8 out of contract players, including, Josh Kennedy, Shannon Hurn, and Andrew Gaff, the Eagles are wasting no time getting ready for next year’s campaign.

But with a crop of players due to return to training in less than two months time, there are a couple of players who’s futures still remain in limbo.

Lewis Jetta is one of them.

The 31-year-old half-back joined the West Coast in 2016, after playing 127 games with Sydney, and was part of the Swans 2012 grand final winning side that beat Hawthorn by 10 points.

But Jetta didn’t get off to the best of starts with the Eagles and struggled to find his form in his first two years, playing just 12 games in 2016 and 15 in 2017.

It wasn’t untill 2018, after changing position to slot into the backline, did the dual premiership player find his form.

Jetta thrived in the half-back position, using his rebounding pace to wreak havoc against opposition midfielders, kicking some important goals for the Eagles, notably in that qualifying finals game against Collingwood, that ultimately helped the Eagles push on to secure the 2018 flag.

This season the Eagles have lacked pace coming out from defence and we understand this is an area of the squad Adam Simpson will look to strengthen during the summer.

With his experience, pace, and history of showing up in big games, Jetta could still certainly do a job in the Eagles backline.

But after suffering from a recurring calf strain and being overlooked on selection throughout the year, it’s been a tough season for Jetta, especially after the Western Australian was named as an emergency in the elimination finals loss to Collingwood 2 weeks ago.

With Kennedy, Hurn, and Gaff all signing contract extensions last week, questions are being asked as to whether the 2018 Chris Mainwaring medalist will stick around to pull on the blue and amber next season.

It seems the Eagles are keeping schtum on Jetta’s movements and after being pressed for an update on 7 News last week, Adam Simpson stated, “I think it will be a little unfair to go through every spot on the list because you’ll land on one that I don’t want to talk about.”

Although we’re sure the Bunbury born defender would prefer to play out the remainder of his career in his home state, and he certainly has a few years left in him.

But after playing only 6 games for the Eagles in 2020, it is possible that Jetta could be moving on.

GWS and Adelaide are both looking for a hard-running defender, and with Jetta’s maturity and premiership-winning experience, he’d be a great singing for both sides, particularly for the Giants, who could use his wealth of finals experience to spur them into the top 8 next season.

And despite the speculation around Lewis Jetta’s departure, I wouldn’t rule out the possibility of him staying just yet.

Vardy hasn’t featured at all this year, after undergoing surgery to rectify a nasty cork injury to his thigh, back in August.

“It’s a bit of messy operation but that’s probably going to mean he’s out of action for a period of time.”

General Manager of Football Craig Vozzo speaking back in August on Vardy’s injury.

After arriving as a backup ruckman replacement for an injured Nic Naituani in 2017, Vardy now makes up one of six ruckmen currently on the books at the West Coast.

With marquee man Nic Naituani being the Eagles first choice, we’re expecting Bailey Williams, who has impressed in his rookie year, to back up Naitanui in the ruck position next season.

2019 draftee, Callum Jamieson is also expected to provide support at the ruck, as he looks to return from injury next season.

Simpson will also look to utilise the attacking ruckman Oscar Allen at the centre bounce. If Josh Kennedy is to retire next year, it’s likely we’ll see Allen move into the full-forward position, but after proving his potency at the stoppage this season, he remains another great option at the ruck for the Eagles.

That puts Vardy in at Simpson’s 5th ruckman pick, with sources advising us that the final ruckman on the Eagles roster, Tom Hickey, is highly likely to depart the club this summer for the Swans.

The West Coast are not short of young talent in the ruck position, and it looks like Vardy could have to move on from the club if he wants to play first team footy this year.

But we’re sure he won’t be without opportunitites, with a few big clubs currently sniffing around for ruckman cover.

GWS are one such club looking to address a lack of depth in the position following the retirement of Sam Jacobs and with 34-year-old Shane Mumford moving into a player-coach role next season.

The Bulldogs are also looking for a new centre bounce ball winner and have reportedly been looking to bring North Melbourne’s Todd Goldstein to the Kennel.

But this move now looks to be off the cards as we’re hearing reports Goldstein has decided to stay at North for the coming season, meaning Vardy could prove a great back-up option for the Doggies as a younger, aggressive ruckman, who has a heap of experience bullying his competition at the high ball contest.

It is highly likely that Tom Hickey and Nathan Vardy will leave during the summer, and as for Jetta, we’ll have to wait and see if the 2-time premiership player will stick around for next season.