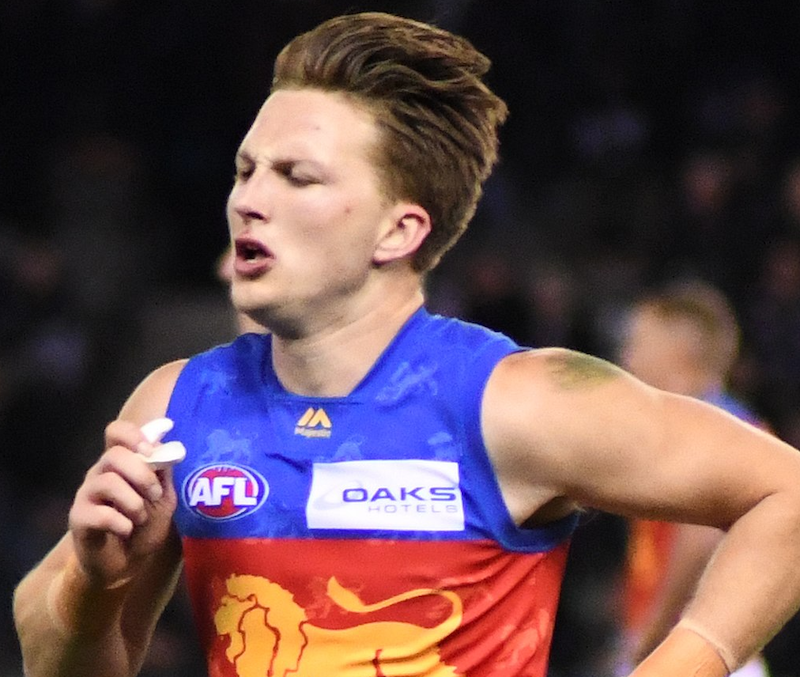 Alex Witherden will don the blue and amber jumper next season in a deal that will see the young defender join the West Coast for their 58th pick in the 2020 national draft.

The deal was struck on the final day of the AFL trade period with the paperwork being officially lodged just after midday on Thursday.

And it’s been a bit of a trade merry-go-round at the Mineral Resources Park as it will be the second time in two days the West Coast have traded their top pick to facilitate a trade.

After parting with pick 38 in the Tom Hickey deal that completed on Wednesday, the Eagles received pick 58 from the Swans as compensation for Tom Hickey.

But yesterday the West Coast used that 58th draft pick to secure the services of Alex Witherden, with the Lions agreeing to pay a percentage of Witherden’s wage as part of the terms of the deal.

It’s safe to say the West Coast have had their eyes on the player for some time, but for Witherden the move to Perth was actually a fairly novel idea at the start of the trade window.

We've completed a trade with Brisbane, to bring in defender Alex Witherden.

Following a meeting with Eagles staff earlier this week, it seems Witherden quickly became intent on a move to the West coast.

“Having met with Simmo, Glassy and Craig Vozzo it just felt like a really good fit,” Witherden spoke on 6PR’s Sportsday WA program.

“I got off the Zoom call and gave Nick Gieschan my manager a buzz straight away and said, “I think I might want to go to Perth”.

“I have no roots in Western Australia but it just seemed like a really good fit for my footy. One thing led to another and before I knew it I’m a West Coast Eagle and that’s really exciting.”

Witherden, who joined Brisbane in the 2016 national draft, broke through the ranks and showed great promise as a mid-sized defender, making 21 appearances for the Lions in 2018 and 23 appearances in 2019.

Known for his high tackling game and ability to intercept bombs to spoil attacks, his best year came in 2019 Racking up an elite set of stats, making 127 marks, 421 disposals, and 38 tackles from the half-forward position.

Although the 2020 season took a different look for the 22-year-old half-back, who became a casualty of Brisbane’s premiership title ambitions. Following the arrival of Callum Ah Chee and Grant Birchall at the end of the 2019 season, Witherden struggled to put together a consistent run of games in the side, making just 6 appearances for the Lions in 2020.

“One, he’s young and two, he’s got a bit of class with ball in hand,” Darren Glass said speaking about Witherden’s talents on the AFL Trade Radio yesterday afternoon.

“They are attributes that we see complementing our current group of mid-sized defenders well.”

“He’s got a lot of natural talent and I think in those first (three) years he really came on to the scene really, really hard and played some excellent football.”

“We believe Alex is a good young player and we think he’s got some upside. We think clearly he’s young enough and experienced enough to help us now and well into the future.”

With his best footy ahead of him, it’s a great deal for the Eagles, who arguably see him as the potential successor to the retiring Shannon Hurn.

The 22-year-old tackling machine will drop into a jam-packed backline of young talent and will grow as a defender alongside the likes of Liam Duggan, Tom Cole, Josh Rotham, and Jackson Nelson.

“They’ve got a really good back six or seven that played a lot of this year and they’ve got some younger guys there in Tommy Cole, Liam Duggan and Jackson Nelson with some more experienced guys around them,” Witherden told Radio 6PR’s Sportsday WA programme yesterday.

“But I think from speaking to Simmo there’s probably a role there at half-back as a bit of a distributor by foot; I could help get the ball moving from the back half.”

Witherden has proved he’s not just an out and out spoil machine though, his vision is superior to a lot of defenders in the league and like Shannon Hurn, can transition the ball upfield well to find attackers in the forward 50.

During the four seasons he spent at Brisbane he averaged 2 inside 50s per game and 4.75 rebound 50s per game, pretty impressive stuff for a junior player.

Despite his excitement to join the Eagles, he knows with the competition ahead of him it’ll be a tough gig to break into the Eagles back six.

“There’s never any guarantees in football. I just want to come to the footy club, be head down, bum up, get to work and the rest will take care of itself.”

“If I can perform at a good enough level there’s an opportunity for me and if I don’t you’re not deserving of it. But I’m pretty confident that I can get there and make every post a winner at West Coast.”

At the end of this year’s trade period, the Eagles now hold picks 62, 86, and 91 heading into the 2020 draft, while holding onto a future first-round pick, two second-round picks, a third-round pick, and a fourth-round pick in next year’s draft.