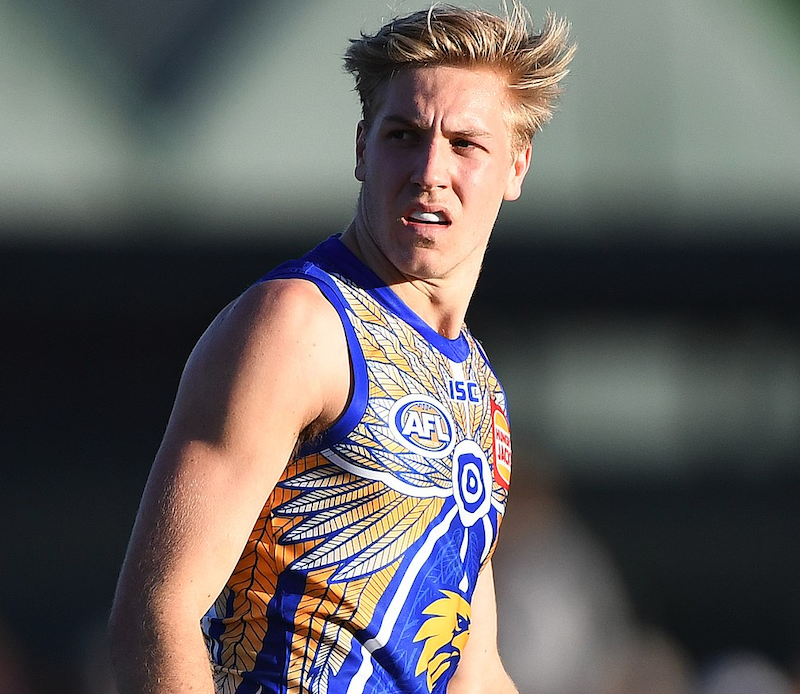 With the Eagles’ pre-season training kicking off this week, Oscar Allen and newbie Zac Langdon gave us an insight into their goals for the season.

Two months on from the Eagles qualifying finals loss to Collingwood, the West Coast’s first-to-four year players have been back in pre-season training, preparing for the 2021 campaign.

Welcome back to our young Eagles!

“I really just want to put my head down and earn the respect of the boys,” Langdon said on 116 SEN yesterday.

“I’m looking forward to just getting some good relationships with the young boys and then obviously the older boys will come back after Christmas.”

The ex-Claremont man was signed from GWS, as a small forward replacement for Lewis Jetta, who was released by the club two weeks ago.

The exciting small forward had a stop-start career in Sydney. Having a fantastic rookie season, Langdon lit up the Giant’s forward line in 2018, scoring 21 goals in 21 games, not bad for his first season.

But things quickly went downhill for Langdon. After suffering a string of injuries and being phased out of the GWS 22, he went on to make only 10 appearances across the 2019 and 2020 seasons.

There’s no doubt he’ll be wanting to get more consistent game time under his belt in 2021 and hasn’t been shy about seeking a move to the midfield to hone in on his craft under the guidance of the ever-experienced Luke Shuey.

2-time John Worsfold medalist, Shuey was also back in training this week, and it looks as though Langdon had been picking the 2018 Norm Smith medalist’s brains at the first opportunity he could get.

“I had a chat with him after and kind of just asked him why he was here and it’s quite obvious that he wants to get the most out of this year and meet the young boys as well,” Langdon said.

“To see the captain down there, it’s pretty inspiring. I just want to put my best foot forward and show him that I want a place in this team.”

“I think I’ve been brought in as a forward, but I really want to get into the midfield.”

“He’s a really big contested beast, and I can learn a lot off him for sure.”

And Langdon isn’t the only one in this young playing group with ambitions to progress his game, with key forward Oscar Allen expressing his goal to become a bigger aerial threat, after averaging only 1.06 contested marks per game in 2020.

Sepaking to 6PR’s Sports Team he clarified his goals stating, “I think just being better in aerial contests and trying to win one on ones.”

“I think that’s the main thing good key forwards and good players are judged upon when they’re in a one-on-one contest how often they win those contests and how often it leads to goals kicked for the side.”

“That’s probably the main thing I’m working on, my physicality in the contest and winning or halving as many as possible.”

Standing tall at 192cm, Allen can pluck the ball from high above his opposition defender’s reach and has been utilised as a back-up ruckman during the past two seasons, providing support to Nathan Vardy and Tom Hickey in 2019 during Nic Naitanui’s absence.

But his best position is in the forward line and is likely to continue to be used as a goal-kicking ruck-forward, who can tap down the ball at stoppages higher up the pitch.

“I want to work on my natural craft, whether that is contested marking or leading patterns. I still prioritise that and my set shots and converting chances.”

“But (I still do) extra things on the track working with Nic (Naitanui).”

“Nic’s been terrific with me. He’s been really patient, and I think the main thing if you watch me play is that I just compete as hard as I can and half the contest.”

Allen certainly had a great 2020, and his work ethic was unrivalled, making 41 tackles and 66 hit-outs from the deep-lying forward position.

And while he kicked several vital goals for the Eagles this season, Allen has also provided his teammates with a platform to launch attacks from, averaging 4 score involvements per game.

“Our midfielders are A-grade, so if I can give them a 50-50 opportunity for the ball more often than not they’ll do the work for me.”

The rest of the squad are scheduled to return to pre-season training on January 6th for a ten-week training block that will lead us into the start of the 2021 campaign.