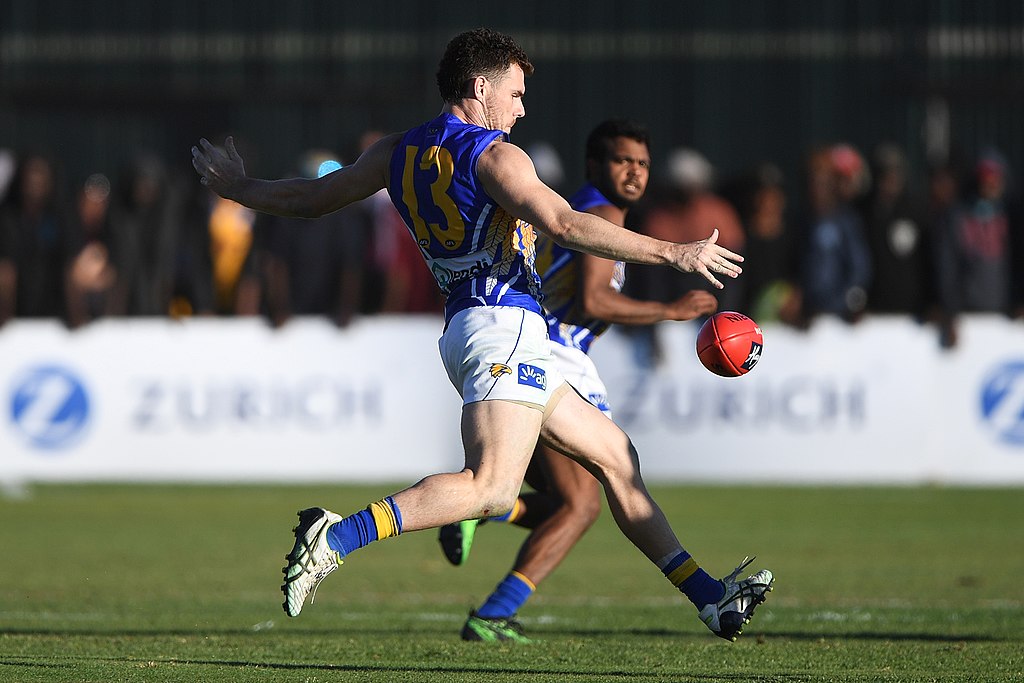 From empty stadiums to biosecure hubs, it’s been a coronacoaster of a year for footy.

It was a season of missed opportunities for the Eagles.

After a successful trade period, securing the services of roving midfielder Tim Kelly, the Eagles were the bookie’s favourites for the 2020 flag.

Sadly, this season didn’t quite live up to the billing.

Finishing in 5th place on points percentage for the second year in a row, the Eagles let a number of winnable games slip through their fingers during the season including their narrow elimination finals loss to Collingwood.

“We didn’t advance as deep as we would have liked, so I suppose (there is) a little bit of frustration but we saw some growth as well, a little bit of a combo I suppose,” Simpson said on TAB Radio back in October.

“We look back on our season and we lost three in a row early in the year and we lost by plenty. That hurt our percentage.”

After waiting three long months for the season to restart, the Eagles travelled to Queensland to fulfil their first string of fixtures in the biosecure hub. But it appeared life on the road didn’t suit the Eagles, losing to the Gold Coast, Brisbane, and Port Adelaide in their first three games back.

The trio of losses seemed to catalyse the Eagles into action, with the West Coast turning things around pretty drastically to fire their way to an 8 game winning streak, demolishing Collingwood by 66 points, with Josh Kennedy putting 7 goals past the Magpies.

As the AFL ladder started to tighten up, the Eagles progressed into a cram of fixtures, that saw them play 5 games in 19 days during their second stint in the Queensland hub, suffering multiple injuries and concede two games to Richmond and the Western Bulldogs that cost them a 4th place finish.

And while missing out on 4th place was a tough pill to swallow, the subsequent 1-point elimination finals loss to the Pies was an excruciatingly disappointing way to end the season.

“It hurts a little bit more because you put so much effort into this season,” Simpson said.

“Every club will be feeling the same if they don’t win the flag this season. It almost feels like a bit of a waste but I’m still proud of what we have done.”

Despite the bitter ending, there were some major breakthroughs this season, with Eagles marquee signing Tim Kelly impressing in his debut year and a new class of young players coming through the ranks to prove that the future is certainly bright for the West Coast.

Join us as we look back on some of the highs and lows of the 2020 season!

Singing from Geelong in the 2019 off-season, the Eagles broke the bank to secure the services of the 26-year-old midfielder and what a worthwhile investment he became.

With Elliot Yeo injured for the best part of the year and Luke Shuey suffering multiple hamstring strains late in the season, Kelly stepped up to the plate and had a phenomenal season playing 18 games from the midfield, making a whopping 360 disposals this year and an impressive 18 goal assists, the 3rd best in the league this season.

Leading from the front with his agility and pace, Kelly was one of the leaders on the pitch with his best performance coming in the gutsy win against St Kilda in round 17, racking up 30 disposals, 6 marks, 4 tackles and a goal, his 5th of the year.

Kelly’s work rate around the stoppage and speed moving the ball up the field has made him an integral part of the Eagles offence. Capitalising on Nic Naitanui’s ability to win the ball at the ruck Kelly has provided a great link between attack and midfield, getting the ball up to the Eagles attackers quickly to catch teams on the break.

The Next Generation of Eagles

Despite the disappointing finish to the season, Adam Simpson will surely be impressed at the crop of young players coming through the ranks.

The Eagles were forced to utilise their squad depth after conceding a list of injuries during the year, giving debuts to 6 rookies with an average age of 20.8.

They’ve all played an integral role in the team with Nic Reid and Xavier O’Neill both having fairytale starts to their AFL careers, each kicking a goal on debut.

“We want sustained success, we want growth into our kids, we want to bring in talent – all those things. We want to win,” Adam Simpson said. “We’re disappointed but we still have hopes for our younger players coming through.”

“That’s probably what we’ll take out of it, some really good growth of our younger players.”

Meanwhile, an already established group of young players are making waves in the Eagles squad. Liam Duggan (23), Tom Cole (23), Jackson Nelson (24), Jake Waterman (22),  and Oscar Allen (21) have all had a breakthrough year, with Liam Duggan perhaps leading the charge of the rising stars.

Duggan has impressed from the back, working well with Shannon Hurn to rebound out of defence to launch scoring opportunities from the Eagles 50. He’s tackled hard this season and recovered the ball well for the Eagles averaging 17 possessions and 5.8 marks per game.

The Eagles have thrived at the stoppage this season.

With Nic Naitanui able to provide the Eagles with a platform to launch attacks, the West Coast have been able to move the ball quickly to their attackers and take the advantage early on in games.

It’s been a weapon the West Coast have utilised a lot this season but is perhaps something they’ve utilised too much, with the strategy becoming a little predictable towards the end of the year.

“You can’t rely just on that for field position you need to get it from other ways. We need to keep it in our front half,” said Adam Simpson.

Often when the Eagles have lost the ball high up the field, they have struggled to contain teams breaking fast. We saw that in the loss against the Bulldogs in round 16, with the Dogs utilising their fast offloading game to work the ball forwards and capitalise on a displaced Eagles field position.

Plus the Eagles accuracy in front of goal has also left a lot to be desired.

With only a 57% kicking accuracy for the season, the West Coast struggled to find the middle sticks, leaving a number of important goals on the field that could have swung them into a spot in the semi-finals.

During their elimination final loss, the Eagles had only a 55% conversion ratio, scoring a disappointing 9 behinds during the match.

In order to become a premiership-winning side, the Eagles will need to improve on their accuracy for next year and to become more clinical when converting their chances, particularly in big games.

Player Of The Year

With multiple players, including Andrew Gaff, Jeremy McGovern, and Brad Sheppard sticking their hands up as John Worsfold medal contenders, but no one was more influential in the Eagles side and more deserving of the best and fairest medal than marquee ruckman Nic Naitanui.

The 2020 All-Australian has come back from some devastating injuries over the past few years, to have one of his best seasons on record, coming second in the AFL this season for total hit-outs, recording a huge 495 tap downs this season.

Instrumental in launching score attacks from the stoppage, Naitanui’s strength at the ruck wasn’t his only asset. He’s worked hard this year to improve his fitness, getting around the pitch to pop up and take crucial marks in defence, while also scoring a couple of wonderful snaps at the other end of the oval.

After a belter of a season, Nic Nait will be hoping to improve on his impressive stats in 2021, and lead the West Coast to a premiership win in 2021.

It’s safe to say the Eagles did well to make it through the year and to finish as high as they did considering the number injuries the squad had.

Elliot Yeo was perhaps the biggest miss this season, managing just ten games for the side before having to sit out the remainder of the season.

Hub life and the festival of footy drastically depleted the Eagles’ playing stocks and perhaps without the injury troubles, the Eagles season might have looked a lot different.

The excitement machine Liam Ryan dazzled in the air once again this season.

Every time the ball goes his way he pulls off a near-impossible aerial grab, beating multiple opposition defenders to pluck the footy out of the sky.

The 2019 mark of the year winner has literally risen to new heights this season to broaden his game, showing that he’s not just a target man up top but is also one of the most creative playmakers on the pitch, averaging 5 score involvements per game.

With an impressive 26 goals under his belt this year, we can’t wait to see flyin’ Ryan back in action again next year.

After going 12-6 this season, the Eagles will look to capitalise on their good form and go one better to make next year’s finals.

With Josh Kennedy and Shannon Hurn hanging around for another season and new signings Alex Witherden and Zac Langdon joining up with the squad this summer, the Eagles are still well within their premiership window and are a hot favourite for the 2021 flag.

“We’ll keep looking at what’s out there, try to go through the draft like we need to and, just like every club, try to get better next year. We have to get better, we weren’t good enough this year,” said Adam Simpson.