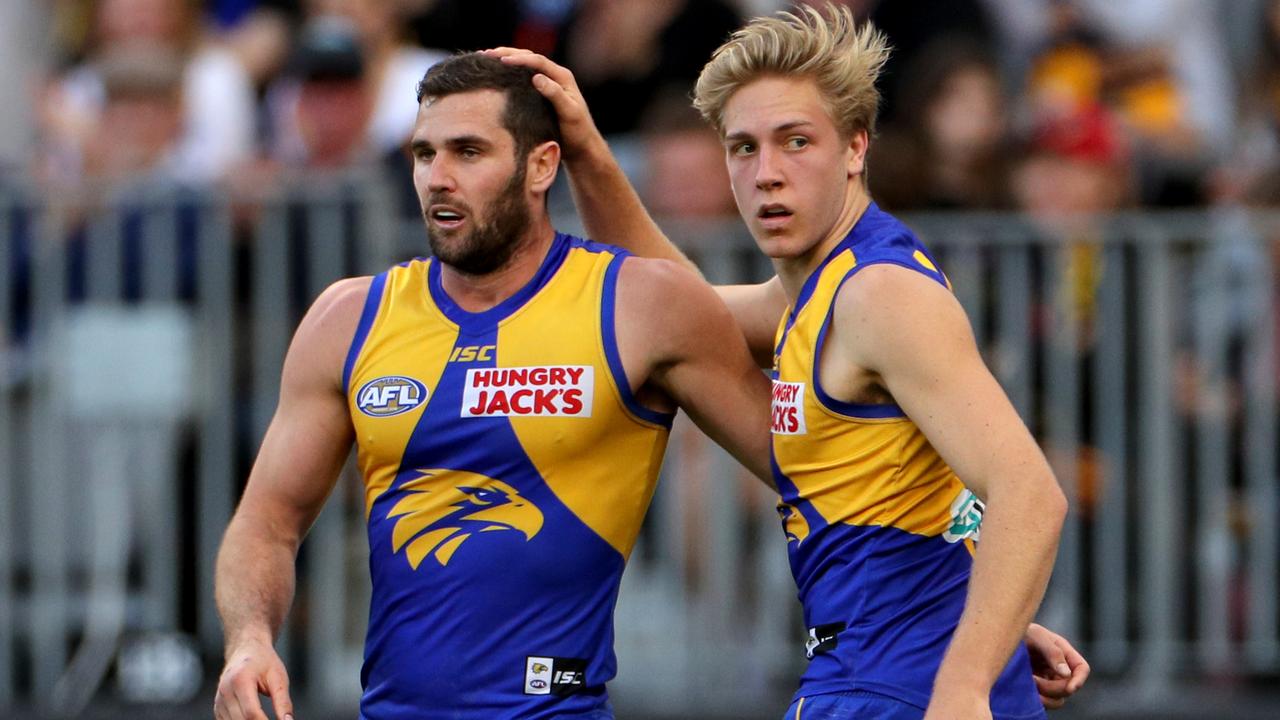 The West Coast secured their first win of the 2021 season in front of a roaring home crowd at the Optus Stadium today.

The West Coast got their 2021 season off to a solid start, with a hard-fought win over the Gold Coast this afternoon.

In scorching hot conditions, the Eagles had to battle to control the play against a young Gold Coast Side who asked questions of the West Coast defence throughout the match.

“It was tough. Obviously its really hot over here. We know what Gold Coast bring at the start of the year, and over the past three or four years, they’ve been really competitive, and they’ve brought that again today,” said Eagles’ forward Oscar Allen after the match.

Allen stood out as one of the Eagles best today, with his link-up play with Josh Kennedy and Jack Darling proving to be a lethal weapon against the Suns’ backline.

Sitting higher up the field than usual, full-forward Josh Kennedy occupied the attention of the Suns’ key defender Sam Collins. That allowed Oscar Allen to sit deeper on the pitch and capitalise on a mismatch in height over Suns half-forward Jack Bowes.

“We’ve been working really hard the last couple of years on our chemistry and how we work together,” Allen said, speaking on his relationship with Josh Kennedy and Jack Darling. “They’re both all champions of the game, they’re both All-Australians. We know what they bring week-in week-out.”

The trio bagged eight goals between them during the match, with Allen claiming four of those, putting his name up as an early contender for this year’s golden boot award. Ruckman Nathan Vardy and small forward Liam Ryan also got on the score sheet for the Eagles.

Having suffered a 40 point thrashing to the Suns at the start of the 2020 season, it looked like the West Coast were out to atone for their loss from the start, belting three quickfire goals past the Gold Coast in the space of four minutes.

But traffic didn’t all go the Eagles way.

The Suns slowly started to claw their way back into the match, despite losing roving midfielder Matt Rowell to injury before the first break.

Winning possession up the field, the Suns took their opportunities as they came and got onto the scoresheet through a smart bit of play that saw Izak Rankine combining nicely with forward Ben King who claimed his first goal of the match.

Starting to pepper the Eagles defence, the Suns were rewarded with a second goal from midfielder Alex Sexton who rolled the ball through the sticks from just ten meters out.

After dropping off towards the end of the first 20, the Eagles came back to take the first blood of the second quarter, with Oscar Allen bagging his third goal of the match just after the break.

Gambling on a kick through from Tim Kelly, Allen was rewarded for his perseverance as Suns defenders, Collins and Bowes, failed to control a ball coming over the top. Taking his chance, Allen collected the football and snapped the through the posts to keep the Eagles infront.

In the absence of Luke Shuey and Elliot Yeo, Tim Kelly and Dom Sheed stood up as the spark the Eagles midfield.

Kelly’s service to his attackers inside the 50 was outstanding all game. Booting nine inside 50s and making a whopping 13 score involvements during the match, his combination with Nic Naitanui at the stoppage was devastating for the Eagles.

Likewise, Sheed was equally impressive with the ball in hand today, making 34 disposals while claiming seven score involvements himself.

But Stewart Dew’s side looked like they’d been doing their homework and started to restrict the Eagles’ passing options upfield, forcing them to move the ball wide away from their target men in the middle.

With a grip on the match, the Suns advanced stealing the ball high up the pitch to score two quickfire goals, with Lachie Weller and Ben King recording the majors.

Touk Miller, Ben King, and David Swallow all followed on to kick goals in the third quarter for the Suns.

But the home side responded though a lovely passage of play that saw Nic Naitanui pop a delightful ball off to Jamie Cripps who kicked an exceptional goal from a tight angle against the posts.

And if it wasn’t for a strong performance from the ever-reliable Eagles defenders Shannon Hurn, Tom Cole, and Tom Barrass who recorded 33 marks between them, the Suns would have had a much easier time inside the Eagles 50.

Conceding a goal just after three-quarter time, the Eagles went six points adrift of the suns with 17 minutes to go. But all-time record goal kicker, Josh Kennedy steadied the ship and pulled a goal back to spur some momentum back into the West Coast side.

Oscar Allen backed that up, beating three suns defenders to a mark ten meters out from the sticks that resulted in his fourth score of the match.

With their feet on the gas pedal, the Eagles cruised out the remainder of the match, with Liam Ryan and Jack Petruccelli bagging two more goals late on to seal a hard-fought win for the West Coast.