West Coast Eagles > News > Analysis > Adam Simpson: “Our Maturity Got Us Over The Line In The End”

Adam Simpson: “Our Maturity Got Us Over The Line In The End” 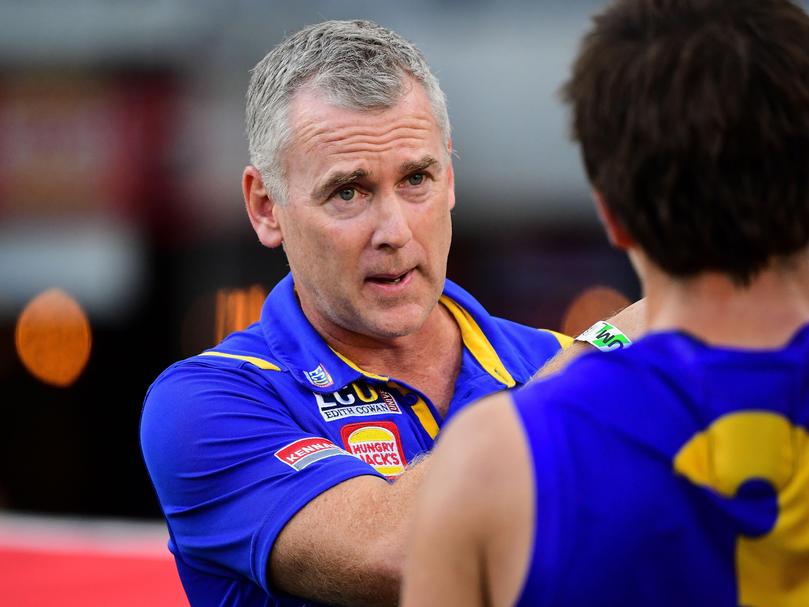 Eagles Head Coach Adam Simpson believes his side “elevated the contest” in their hard-fought win against the Gold Coast on Sunday afternoon.

West Coast boss Adam Simpson credited his side’s experience as the key to their gritty win over the Gold Coast on Sunday afternoon.

“I think the players just went to another level. They’ve been around a bit longer than some of the Gold Coast boys. Elevated in the contest, got good field (position), all the basic stuff,” Simpson said in his post-match press conference.

“It was a slog. A pretty open game too. There was a lot of width for both teams.”

After tearing into the Suns’ defence in the opening five minutes, the Eagles afforded the Gold Coast too much space and time on the ball in the middle of the park, allowing them to get back into the game just before half time.

“They (Gold Coast) are going to be a very good side – they probably are already a good side really – they’re not as young as you think they are. They’re ready to go. But even after losing one of their best players in the first five minutes, they didn’t go away at all.”

“We spoke a lot about how to try and stop the flow of the ball movement from our front end to their front end; it was quite hard to stop.”

“But in the last 15 minutes, we probably had a bit of field position, and we won the important contest.”

Gun forward Oscar Allen was vital in dominating that contest up top for the Eagles. Combining with Jack Darling and Josh Kennedy, Allen found space away from Suns key defender Sam Collins to shoot four goals during the match.

“Hopefully, he (Allen) is going to be a very good player for us for a long period of time,” Simpson said.

“We’ve been using him a little bit down back throughout the quarters just to give our talls a break because we’re pretty tall in our front half, so it gives our smalls a look too.”

“He’s got some great leaders around him to really help him grow and take the heat off him, and that transition will continue this year.”

Kennedy and Darling will undoubtedly look to take the heat off Allen again next week, with Bulldogs’ key defender Alex Keath likely to target the gun striker as the Eagles travel to Victoria for their first away fixture of the season.