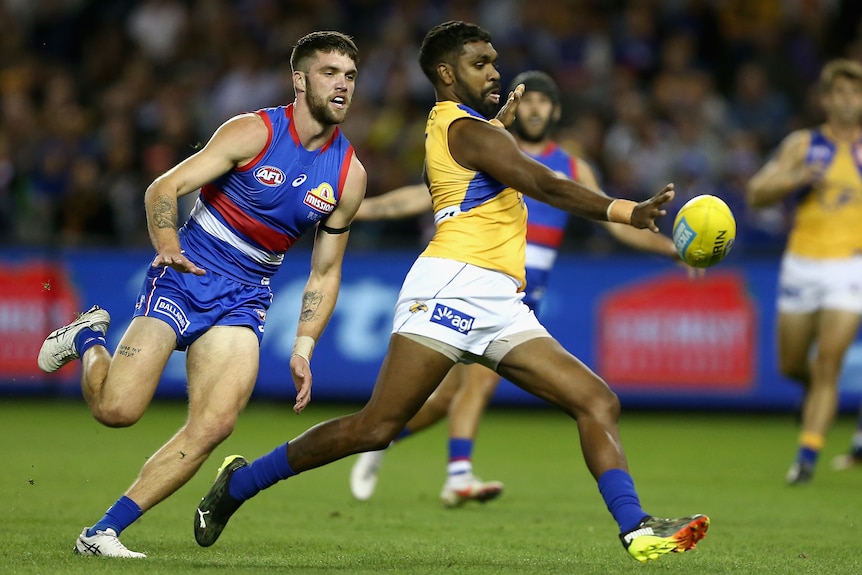 Kicking two goals at the death, the Western Bulldogs downed the Eagles in a Sunday afternoon thriller at the Marvel Stadium.

After fighting their way back into the match following a poor first half, the West Coast suffered a devastating loss to the Western Bulldogs right in the dying embers of the match.

“It was a bit of a roller coaster,” Head Coach Adam Simpson said in his post-match press conference. “I thought we got jumped early. Got beaten in the contest, out possessed out hunted, were a bit fumbly. But we defended well.”

“Our backs and our system held up to a reasonable point, but the floodgates were pretty close to opening.”

“We hung in there for the first half, challenged each other at half time, and thought we played more of the type of football we’d like to be proud of, to fight our way back into it.”

The match will go down as a classic for the neutrals, but it was a bittersweet loss for the Eagles, who showed signs they could nick the game after a strong third quarter.

Josh Kennedy provided the Eagles with the spark they needed, kicking four goals during the match. Meanwhile, Liam Ryan added a few more clips to his acrobatics highlight reel, showing off his dance moves to sell Dogs’ defender Ryan Gardner for some candy to get clear on goal and chip a wonderful six points through the sticks.

As anticipated, the Dogs came out with a game plan to flood the centre of the park. With so much quality in midfield, it was hard for the Eagles to keep up with Adam Treloar, Marcus Bontempelli, and Jack Macrae, who moved the ball quickly around the pitch.

It was the West Coast defence that kept the Eagles within a score’s distance for most of the first half.

Tom Barrass and Josh Rotham were the stand-out players in the Eagles Backline, spoiling multiple Dogs attacks, while taking 19 marks between them.

Combining to record 94 more disposals than the West Cost, at an 81% efficiency, the Bulldogs moved the ball well through their hands to wreak havoc on the Eagles midfield. Key playmaker Marcus Bontempelli caused some real issues for the West Coast defence, putting on an attacking showcase to boot seven inside 50s and three goals past the Eagles defence.

But the West Coast outclassed the Dogs in front of goal today. When given their chances, Josh Kennedy and co were far more clinical than the Dogs, making 61% of their kicks compared to the Dogs meagre 41%.

No need to kick across the body when your drop punts are this good 👏#AFLDogsEagles pic.twitter.com/doUgT06EMl

Kennedy was the pick of the bunch, sweeping four goals through the sticks to take his 650th goal for the West Coast. And he was backed up well by Jack Darling and Jermaine Jones, who both scored three goals apiece. Meanwhile, Liam Ryan and Oscar Allen made up the remainder of the goal tally, notching two goals each.

The Eagles grew into the game in the second half and dominated the third quarter through Nic Naitanui’s superior ruck work. The marquee ruckman was vital in setting up eight of the West Coasts’ goals, hitting out an incredible 40 times while putting through seven inside 50s and 11 clearances during the match.

“He (Nic Naitanui) is a barometer for us. He’s a best and fairest winner, and when he’s on the ground, we walk a bit taller. And there’s a lot of expectation on him as well, you know every week they strategise against Nic, and he sort of works his way through it,” Simpson said of Naitanui after the match.

With Nic Naitanui providing the Eagles with a platform to attack from, the West Coast turned around a seven-point half time deficit into a 12 point lead heading into the final quarter.

Three goals from Darling, Allen, and Ryan put the Eagles in the driving seat, and it looked as though the West Coast could pull away from the Bulldogs.

But the Dogs came back, with three goals from Vandermeer, Bruce, and Naughton, bringing the scores to within one point, teeing us up for a tight finish.

Two quickfire goals from Jack Darling and Jermaine Jones gave the West Coast a little more breathing space, and with three minutes left on the clock, it looked as though the Eagles had done enough to take the win.

Although, Dogs’ midfielder Jack Macrae thought differently. Receiving the ball from the resulting bounce, Macrae belted upfield and found an unmarked Alex Naughton, who took no hurry in bringing the Bulldogs back into the lead by a point.

Running out of time, Eagles threw McGovern and Barrass forward, hoping they could rescue the match. But Dogs’ defender Bailey Williams dealt with the pressure well, cleaning up a probing kick on the edge of the 50, and launched the ball upfield to an unopposed Marcus Bontempelli, who kicked through to seal the match.

The Eagles will need to pick themselves up quickly as they look to take on a tough Port Adelaide side who are undefeated following the first two rounds of the 2021 season.