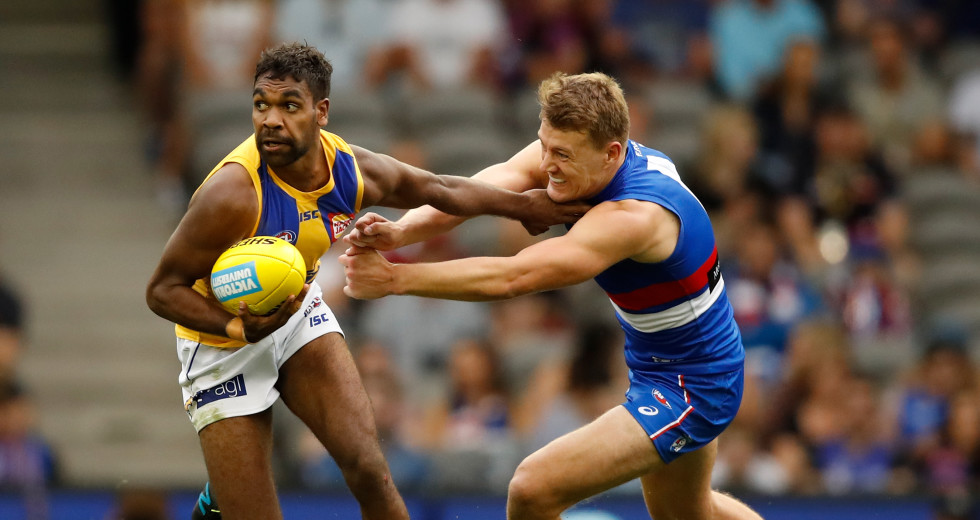 The Eagles will need to guard against a Bulldogs midfield that is loaded with quality if they are to secure their first away win of the season on Sunday.

It was accuracy and speed that let the Eagles down in their loss against the Western Bulldogs last season.

With Marcus Bontempelli kicking a contentious last-minute goal that appeared to have been touched by Jeremy McGovern on its way over the line, the Dogs edged the West Coast by two points, stifling the Eagles top-four hopes.

After outplaying the Eagles in midfield last year, Luke Beveridge’s side will look to do the same this coming Sunday and will look to stop the Eagles from getting the ball upfield to key attackers Josh Kennedy and Oscar Allen.

Plus with a few new faces in midfield, this refreshed and dangerous Bulldogs side will provide the first big test of the 2021 season for the West Coast.

“I think they’re a top-four team,” Eagles head coach Adam Simpson said of the Western Bulldogs. “Arguably, they have the best midfield in the competition. With acquisitions over the summer; there is plenty of belief there. They play a really good system, so it is going to a massive challenge.

“We are looking forward to the travel and getting over there, but it is going to be a massive challenge.”

Bulldogs coach Luke Beveridge should certainly be commended on some of the excellent business he completed over the summer trade window.

Bringing in Adam Treloar from the Magpies and Stefan Martin from the Lions, the quality and experience in the Bulldogs’ midfield is now pretty scary, if it wasn’t enough already. Their midfield will undoubtedly be the biggest issue for the Eagles this weekend.

Last weekend against Collingwood the Bulldogs were rutheless in defence, hunting in packs to turn over possession and force the Maggies to play out to the wings, instead of seeking their tall forwards up top.

That allowed the Dogs to constrain the Pies of any attacking momentum, with Tom Liberatore and Jack Macrae recording an impressive seven tackles each, suffocating Collingwood in the centre of the park. The pair will undoubtedly look to do the same to Eagles’ rebounding midfielders Tim Kelly and Dom Sheed on Sunday.

In attack, they were equally as potent. Gun winger Bailey Smith was the best afield, amassing 36 possessions while scoring two delightful goals in the early exchanges of the match.

And we haven’t forgotten Marcus Bontempelli up top, who the Eagles know all too well, can twist a game on its head.

So, how do the West Coast overcome such a relentless, fast-moving Bulldogs side?

It starts at the back, with Tom Barrass, who will have his hands full to control the Dogs’ Aaron Naughton and Josh Bruce. Bruce was sublime in the air against the Pies last week, taking 11 marks during the match, and Barrass will need to stick close to him to spoil any bombs coming into the Eagles’ 50.

Jack Redden is likely to take up the tagging duties on Sunday. But he’ll have his hands full with Bontempelli, Treloar, Smith, Dunkley, and Macrae all causing problems in midfield.

And as the Dogs love to move the ball fast through the hands, the Eagles engine room will have their work cut out to shut off passing channels around the centre of the pitch.

22 traveling for @WestCoastEagles to take on @westernbulldogs – in order of arrival, because I’m a nerd.

One big change in the Eagles side this weekend sees rebounding half-back Liam Duggan move into the roving midfield position. He’ll be instrumental in providing added pressure on the likes of Treloar and Macrae in the middle.

Being both strong in the tackle and quick to read the play, Duggan can use his strengths to shut down the Dogs attack stemming from the back of the pitch, but can also recover the ball and launch an attack from deep, allowing the Eagles to quickly counter on the Bulldogs’ midfielders.

Up top, the Eagles can beat the Dogs by creating mismatches as they did against the Suns last week.

Tall defenders, Ryan Gardner and Alex Keath, will be tough to beat in the air. So the West Coast will need to be smart to cancel them out.

Josh Kennedy and Jack Darling will look to move Keath and Gardner out of position, to open up more space inside the Bulldogs’ 50 for tall forward Oscar Allen to capitalise on height mismatches in defence and put pressure on the Dogs’ smaller defenders Caleb Daniel and Bailey Williams.

Although the dogs have a lot of quality in the centre of the pitch, the Eagles’ hold a greater presence at both ends of the field. If they move the ball fast, take their opportunities in front of goal, and put pressure on the Bulldogs’ defensive line, the West Coast should come away with their first away win of the 2021 season.

Defender Tom Cole comes in to start in place of Jackson Nelson in the half back position.

Jack Petruccelle moves onto the emergencies list in place of gun midfielder Xavier O’Neill, who gets his first start of the season after impressing with the ball in hand against the Suns last week.

Conditions are expected to be dry and sunny at the Marvel Stadium on Sunday. Expect a fast running game of footy.