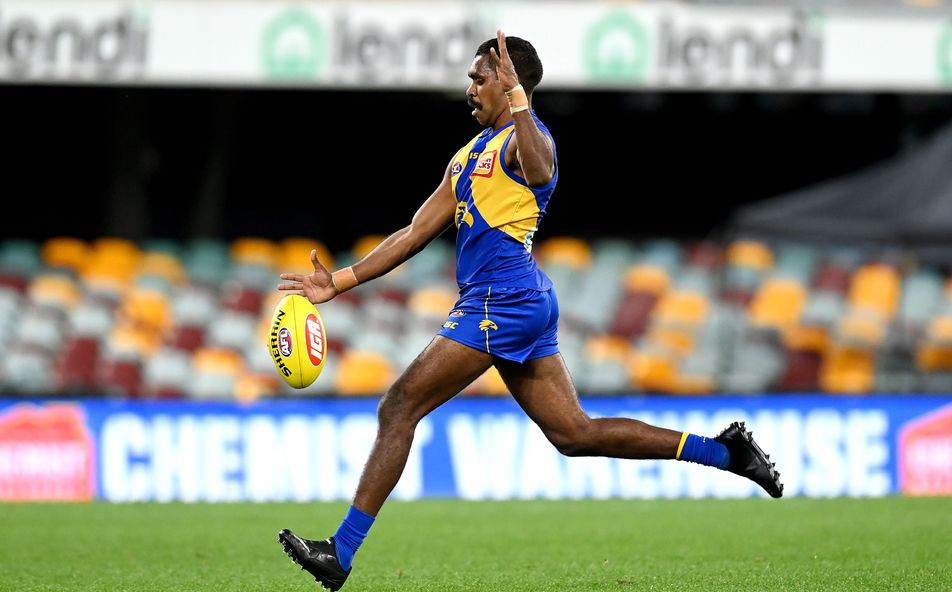 Firing off five goals in the opening five minutes, the Eagles got off to a red hot start dominating Port Adelaide on Saturday night.

After a poor first half against the Western Bulldogs in round 2, the Eagles got off to a flying start on Saturday afternoon to obliterate Port Adelaide 16.12 (108) to 11.5 (71).

Dominant in control of the ball and playing with bags of confidence, the West Coast ripped into the Power from the first bounce to score a flurry of early goals.

However, the win was soured as returning Eagles captain Luke Shuey limped off the field late in the second half after suffering another hamstring injury.

After making 28 disposals and seven score involvements, the 2018 Norm Smith Medalist was one of the Eagles best afield in the first half but looked dejected as he sat on the touchline after suffering his 4th soft tissue injury in the last six months.

“Injuries happen, and you’ve got to be pretty resilient in this competition. But when you have a continual issue, and he couldn’t be more professional, it’s tough. We’ve got to put our arm around him.”

Shocking Port Adelaide from the opening bounce, the West Coast cleared the ball forward on three separate occasions to boot a hattrick of goals within the first five minutes.

Tim Kelly, Jamie Cripps, and Liam Ryan were the scorers, not wasting a single entry into Port Adelaide’s 50. And Liam Ryan’s was perhaps the pick of the bunch, with Luke Shuey hacking a ball out of mid-air to hit Liam Ryan just inside the forward 50.

The Eagles forward line were once again dominant under the high ball. Goal machine Josh Kennedy showed his brilliance to claim another four goals, while Jack Darling claimed a hattrick, putting through an incredible snap with his back to goal in the third quarter.

We expected the Power midfield to try to overrun the West Coast as the Bulldogs did last week. But Travis Boak, Ollie Wines, Orazio Fantasia were all nullified by a brilliant Eagles midfield.

Dom Sheed, Tim Kelly, and Jack Redden were all impressive around the ground, with Sheed showing off his cannon of a left boot to kick a monster of a goal in the second quarter.

Andrew Gaff, who has taken some criticism for his form over the last week, was outstanding and led the Eagles midfield throughout the match. Recording a whopping 36 disposals, 13 marks, and five score involvements, Gaff settled back into the classic roving position he’s been so clinical in throughout his career, putting all questions about his recent form to bed.

Jamie Cripps looked to have forgotten all about last week’s kicking woes as he calmly slotted his second of the night from a tight angle in front of the sticks. Jack Darling followed up to get on the score sheet for his third goal and could have bagged his fourth shortly after, but unselfishly handballed to Jack Petruccelle, who made no mistake in taking his second goal of the season.

With the score worm facing 45º north at the first half, the Eagles were looking well in control of the match, cushioned by a comfortable 52 point lead at the half.

Power started to work their way back into the match, with Todd Marshall and Robbie Gray shooting back-to-back goals.

But the Eagles service from the stoppage was sublime once again, with Nic Naitanui tapping out from the resulting centre bounce to Andrew Gaff, who bombed a ball deep inside 50 to Josh Kenndy, who took his third goal of the night.

Port Adelaide hit back late on with goals from Willem Drew, Todd Marshall, and Robbie Gray, but they counted for little with the Eagles able to slow the game down with some smart kick-possession play to put a halt to Port’s advances.

With the Eagles well in control of the match and ahead by 30 points, Adam Simpson’s side cruised their way to their first win over the Power since 2018.

Flyin’ Liam Ryan: Another Submission For Mark Of The Year?

Liam Ryan had the crowd on their feet once again on Saturday night. Putting his foot forward with another mark of the year contender, Ryan rose above 6ft tall Darcy Byrne-Jones, literally sitting on the Port Adelaide defender’s head to take an incredible mark.

Jarrod Brander, who has struggled to break into the Eagles side over the past two seasons, finally got an opportunity to score his first AFL career goal.

After missing an easy set shot from right in front of the sticks, Brander made no mistake when given his second chance, capitalising on some brilliant Eagles pressure inside Port’s 50, to whip a brilliant snap through to get on the scoresheet.

The Eagles go wild as he kicks his first goal! #AFLEaglesPower pic.twitter.com/SlFng0D8Wg

Brander produced his best showing yet in the blue and amber. Racking up 21 disposals, six marks, and six score involvements, the young midfielder impressed playing just off the forward 50.

“We’ve been trying to find a role for him (Brander) at WAFL to get him used to the game awareness and speed of what’s going to happen at AFL,” Adam Simpson said after the match.

“He’s missed that because we didn’t have any footy last year – along with Petruccelle and some of these guys who have been in and out.

“They’ve still got time. We’ve got to get some games into them while there’s leaders around that can show the way, and hopefully, we can develop them.”