Eagles Travel To Melbourne To Take On An Unravelling Saints Side 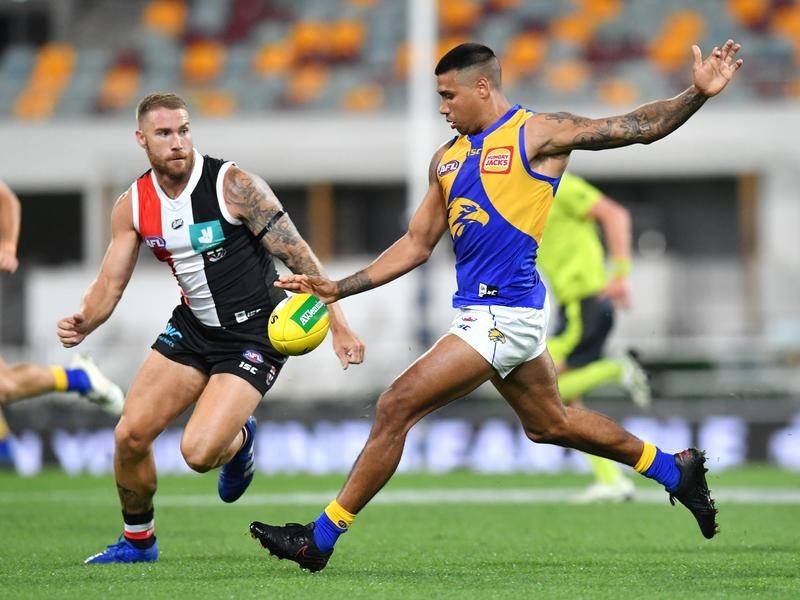 Coming off the back of a huge win against Port Adelaide, a high flying West Coast side have arrived in Melbourne to take on St Kilda in round 4.

It’s been a very tough start to the season for Brett Ratten’s Saints side.

The Saints suffered a humiliating loss against Essendon last week, going 1-2 for the opening three rounds of the season.

Putting 75 points on the Saints last weekend, St Kilda just did not look like they’d showed up to play.

The dramatic loss sparked an outpouring of discontent from St Kilda fans, with long time supporter and Aussie cricket legend Shane Warne tweeting, “the lack of effort and work rate is unacceptable.”

Sorry @FOXFOOTY but I just turned the tv off in disgust as I’m embarrassed at the lack of effort two weeks in a row from the @stkildafc ! So bloody disappointing. If you get outplayed – then so be it – we can all cop that. But the lack of effort and work rate is just unacceptable

Former Saints captain Nick Riewoldt voiced his frustration on Fox Footy’s On The Couch, stating, “It was an immature performance, and it just lacked effort. Sometimes it‘s that simple. People want to ask the question, what went wrong? All of the (bad) stats are effort stats.”

And he was right. The Saints looked like they just weren’t bothered. Affording the Bombers too much time and space on the footy, Essendon took advantage, poking through some easy kicks and terrorised the Saints inside their own 50.

Conceding a seriously low tackle efficiency at just 50% and only making 11 tackles during the first half, the Saints allowed Essendon to score 59% of the times they entered their 50; that’s a whopping 33 scores off 56 entries.

It is a far cry from the fiery St Kilda side, who almost defeated the West Coast in round 17 last year.

With key ruckmen Paddy Ryder and Rowan Marshall still undergoing injury rehab, the Saints have struggled to provide their forward line with any quality service.

The good news for the Saints is they’ll have Marshall returning to the side to face off against Nic Naitanui on Saturday. But there is still a concern that they might be rushing him back too soon, which could cause even more long term issues for St Kilda.

But it’s been a torrid week for the west Melbourne side, with more problems coming out of the Moorabbin Training Reserve, with Brett Ratten confirming that Dan Hannenbery and Jarryn Geary be sidelined for four to six weeks as they recover from calf and ankle injuries.

After the West Coast, the Saints will then travel to play against Richmond and Port Adelaide in rounds 5 and 6, which, considering the way St Kilda played last weekend, does not bode well.

"I'm prepared to say, they will lose the next three games." #AFL https://t.co/qpoJ8rsYLN

Let’s also not get ahead of ourselves thinking the Eagles are going to walk it this weekend.

Although the West Coast have played out a couple of early tests this year against the Bulldogs and Port Adelaide, this game could be their toughest mental challenge yet.

The problem for the Eagles is we don’t know what Saints team is going to turn up on Saturday.

What we do know is if the Saints show up and stop the Eagles from playing their usual kick-possession game plan, as they did last season, then we’ll be in for a scrappy game.

Brett Ratten will have undoubtedly given his team an all-mighty talking too after their thumping last weekend, and that’s where the Saints will be the most dangerous.

There’s nothing worse than playing a team on a rebound, and there will be a few players in that side who will be looking to buck their performances up and bounce back this weekend.

That’s where the Saints could trouble the West Coast this weekend.

Jack Steele was the Saints pivotal player against Essendon in round 3. Amassing 35 possessions, 17 more than any other player on his side, and seven score involvements, he is the focal point of the Saints attack that the West Cost need to shut out early on.

Eagles midfielder Jack Redden could be tasked with tracking him on Saturday. Working well alongside Dom Sheed during the opening three rounds, Redden has impressed with his spoiling work and ability to nullify his opposition and could be utilised to shut down Steele on Saturday.

The West Coast will also want to stop supply to striking duo Max King and Jack Higgins, who bagged a hat-trick of goals against the Bombers last week.

Thats where Eagles stalwart Shannon Hurn will come in. Rolling back the clock this season to play some of his best footy in an Eagles shirt, Hurn will be pivotal to spoiling those attacks and any shallow bombs coming into the West Coast danger zone.

“He (Hurn) has been tremendous,” Adam Simpson said in a press conference yesterday. “A lot of our players started a bit rusty, but he’s back to his All-Australian best. His leaderships changed, but his output is great. He doesn’t look like he’s slowing down at all.”

How To Beat The Saints

The Eagles forward line will be key on Saturday.

Oscar Allen, Jack Darling, and Josh Kennedy will once again be looking to create height mismatches against the Saints’ relatively small defenders.

Josh Battle is their main man in the half-forward line, and he’ll be tough to draw out of position. That means the West Coast should play deeper and pressure the Saints goal square to Josh Battle back towards the sticks and allow small forwards like Liam Ryan and Jamie Cripps to gather any loose balls coming from the resulting contest.

Plus, if the Eagles start with the same momentum as they did against Port Adelaide, with Tim Kelly combining with Nic Naitanui off the stoppage to shift the ball upfield at pace, they will definitely cause a few headaches for Ben Ratten’s side.

The West Coast are also celebrating some significant achievements this weekend, with Shannon Hurn set to overtake Dean Cox to become the Eagles most capped player of all time.

Hurn, who was drafted to the club as pick 13 in the 2005 National Draft, will make his 290th appearance for the Eagles on Saturday afternoon.

He’ll be joined in the honours lists by fellow half-back Brad Sheppard, who will make his 200th appearance for the club after wearing the blue and amber jersey for 12 seasons.

“To play 200 games for this footy club is something I’m very proud of, my family will be very proud of and so will my mates. I’m just over the moon with it,” Sheppard told the club website on Thursday.

Saturday’s match will also be the West Coast Eagles 800th game in the professional football leagues. The Eagles were initially selected as one of the VFL’s expansion teams in 1986 and played their first match against Richmond in March 1987 at the Subiaco Oval.