West Coast Eagles > News > Analysis > How Do The West Coast Fill In For Injured Luke Shuey?

How Do The West Coast Fill In For Injured Luke Shuey? 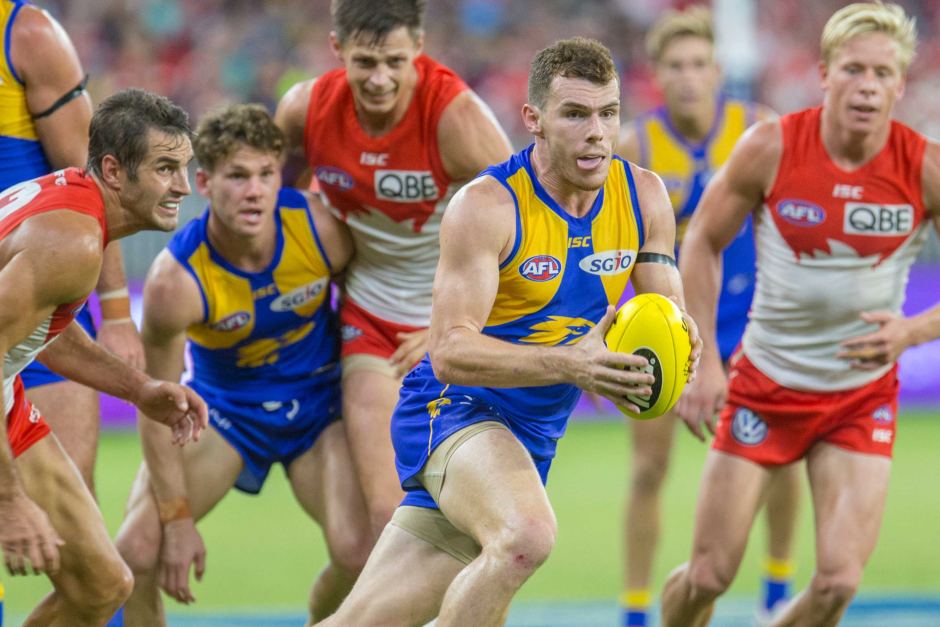 Adam Simpson will once again have to adapt his midfield in the absence of injured captain Luke Shuey.

For Luke Shuey, it was a frustratingly familiar end to Saturday night’s match.

Limping off the field with yet another hamstring injury, the West Coast captain is set to be sidelined for longer than we initially thought.

“It’s going to be a longer period than a normal hamstring. We’re still investigating, so that automatically means extra weeks,” Eagles Head Coach Adam Simpson said in a press conference on Wednesday.

“We’ll get a bit more clarity at the end of the week. It’s a small tear, but it’s just the reoccurrence of the same area, which is always a concern, and it’s something we need to investigate.

“Normally, it’s a 21-dayer, but when you reoccur it gets longer.”

The 2018 Norm Smith medalist had a blinder in his return to footy against Port Adelaide last weekend.

Setting up seven of the Eagles’ goals, Shuey was one of the best afield. But his impact was most felt when the West Coast captain didn’t have his hands on the football.

The work he does off the ball to coordinate and motivate the side often goes unnoticed, and it’s those leadership qualities that will be the most difficult to replace over the coming weeks.

“You’d like to think we don’t rely on one particular player, but it’s hard to replace A-graders,” Simpson said.

“As a collective, I think we’re building. As a whole team, I think relying on one particular player is really dangerous.”

In his absence, the West Coast have several players who can step up in midfield to take on some of that mantle.

Andrew Gaff, who’s had a slow start to the season, stuck his hand up as the Eagles man of the match on Saturday. Although he’s best utilised on the wing, Gaff is also highly effective moving inside into a roving midfield position.

Simpson will once again be looking to utilise him alongside the ever-impressive Tim Kelly in the centre of the park.

Liam Duggan has also been superb over the first three rounds of the season, slotting well into the Eagles midfield to average 22 disposals for the first three games of the year. It’s possible we could see Adam Simpson experiment with Duggan in one of the follower positions too.

But one player who has earned the plaudits of the Eagles boss is Dom Sheed, who’s had a cracking start to the 2021 season for the West Coast.

“He backed that up in the 19 season with a really mature look, and I don’t think he’s taken a step back since. He’s one of our leaders in midfield, and while Luke and Elliot (Yeo) aren’t playing, he’s a regular, a bonafide senior of experience in midfield now.”

It’s clear the West Coast aren’t without leaders in midfield, with Gaff, Kelly, and Sheed all able to lead the line for the Eagles.

Sheed, in particular, could see this as an opportunity to play more centrally, perhaps with Duggan and Jack Redden on either flank.

Let’s also not forget the depth of players the Eagles have in midfield, with several talented young players coming through the ranks.

20-year-old Xavier O’Neill is one such player, and he too has impressed this season, stepping up to cover for Luke Shuey against the Suns and the Power.

With Shuey set to miss at least the next three matches, we’re certain more game time will be coming for the competent youngster.

“He (O’Neill) went out of the side because Luke came in. He’s still got some things to work on, it’s a total football type of package we’re looking for, but he’s still finding the ball,” Simpson said.

“It’s the next step for him as a young midfielder is to get his 30 at WAFL and keep working on the other areas of the game.”

Half-forward Jake Waterman has travelled with the side to play against St Kilda this weekend. Returning from injury, he’ll be another option who can drop back into the Eagles midfield and help free up players like Andrew Gaff to play more centrally.

Jake Waterman with the 24-man @WestCoastEagles squad heading to Melbourne to take on @stkildafc.

The Shuey injury has come at a pretty tough time for the Eagles, who are set to play St Kilda, Collingwood, Geelong, and Fremantle over the next four rounds.

But there’s no doubt they have enough depth and quality in the side to manage these big games.

For Adam Simpson, it’s now about settling on a winning formula, and hopefully, we’ll see the West Coast find that this weekend.