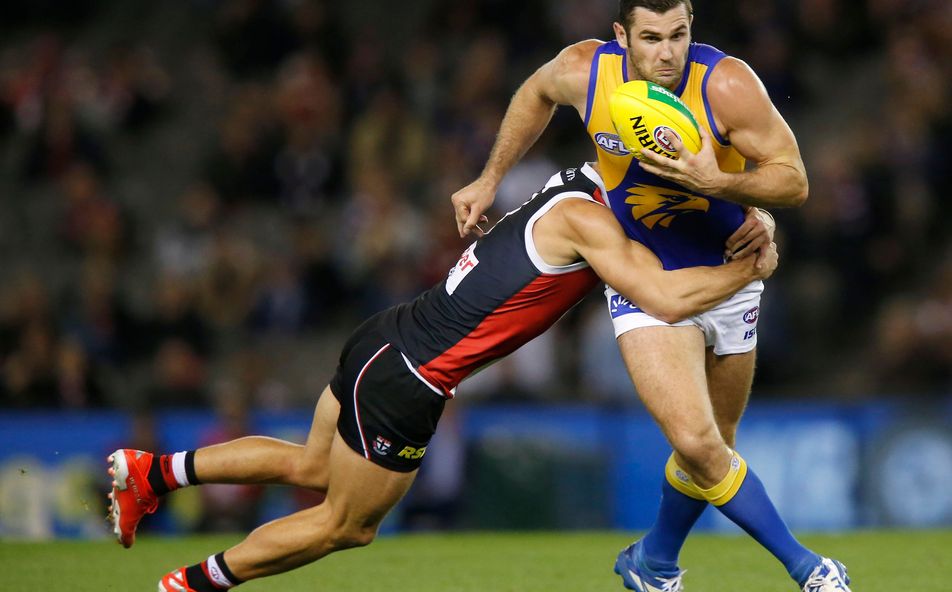 After a tough loss to St Kilda, here are our key takeaways from round 4.

Saturday’s bitter defeat to St Kilda makes it 2-2 at the start of the 2021 season for the West Coast.

That’s pretty average for a team pipped to be in their peak premiership window.

And there’s a lot to reflect on this week, with a massive rebound needed if the Eagles are to beat a tough Collingwood side this coming Friday.

Here are a few takeaways from Saturday.

The same problems continue to arise for the West Coast.

After their round 2 loss to the Bulldogs, we criticised the Eagles’ intensity and ability to keep their foot on the gas over four quarters of footy.

It looked as though they had undone some of those issues against Port Adelaide last week, dominating Power through the entirety of the match.

But once again, the Eagles fell victim to complacency, throwing away a 33-point lead to succumb to the Saints’ pressure in the third quarter of the match.

“We got beaten up in the midfield,” Eagles boss Adam Simpson said in his post-match press conference.

“We couldn’t stop momentum in the contest, that forced us into fumbles and poor decisions, and they capitalised, and we just couldn’t get momentum back.

“They were more desperate than we were.

“The game was right at that point where we could have put the hammer down; I think the belief was still there with the Saints; it was there all day, they showed tremendous heart, and we couldn’t stop it.”

Despite looking very much in control of the match during the first half, the West Coast went MIA in the third quarter, allowing the Saints to grow in momentum and bully the Eagles at the contest.

Credit should go to the Saints for continuing to chip away at the Eagles, even after going 33 points down in the third quarter.

Rebounding from their humiliating loss to Essendon last weekend, Brett Ratten’s side were always going to be dangerous, and they came out firing in the second half, pinging six bombs inside the 50 during the opening five minutes of the third stanza.

Locking the Eagles into their own goal square, the Saints forced multiple errors from the Eagles defenders, and the West Coast just couldn’t cope, struggling to clear the ball upfield.

“We had a nice lead that we worked really hard to get. The third quarter could have been even worse, and I think we were 10 points up going into the last.”

It’s clear the West Coast have struggled to cope with teams holding them inside their own 50. When teams like the Saints and the Bulldogs have prevented them from playing their typical possession game plan, they have really struggled to find another outlet.

Premiership teams are all able to roll their sleeves up and find a way out when they’re under the cosh. And that’s something we’ve seen the Eagles struggle to do over the last two seasons.

“We had a 5/6 goal lead going into the third, and I think a lot of credit has got to go to St Kilda and what they did with the pressure, in particular, the second half, and we couldn’t match the intensity.”

A Lack Of Leadership?

With Luke Shuey out with a hamstring tear, and Shannon Hurn leaving the field early in the first half with a calf strain, the Eagles are down on leaders, and that may have been a part of the Eagles downfall on Saturday.

Was due to break Dean Cox’s club games record this Friday night against @CollingwoodFC – that will have to wait.

And he’s right. The Eagles did need someone to shake things up in midfield and get the team going again.

After that disastrous third quarter, the West Coast had an opportunity to take the sting out of the game and gather themselves at three-quarter-time.

All they needed was a leader in there to stand up and get the Eagles going again in that fourth quarter. But without Shuey and Hurn, there was no one on the field who could do that.

He’s among the options to replace Shannon Hurn, coming off 26 touches in the WAFL. @9NewsPerth pic.twitter.com/BxnfZV5GXk

To win premierships, the West Coast are going to need some of their younger players to step up and take on some of that mantle to keep going after their opposition in those backs-to-the wall situations.

Frustratingly, the Eagles have started the season in a very similar fashion compared to last year.

The circumstances surrounding the 2020 season in the Queensland hub were a little different, but it’s clear the West Coast still aren’t travelling well.

Admittedly going away to both the Bulldogs and St Kilda is not an easy task, but both matches were there for the taking, with the West Coast squandering chances to take four points from each game.

Whether it’s fatigue from flying or playing in cooler climates, the match statistics show the Eagles were once again outplayed away from home.

The Saints topped the disposals statistics with 79 more possessions than the Eagles and were better on the rebound, turning the pressure back onto the West Coast, making 15 more clearances and 12 more tackles inside the Eagles’ 50.

It’s true that travelling can affect a team’s performance, but the West Coast should be accustomed to it by now. Perhaps after the chaos of last season, it will just take a little time before the team get back into functioning in a normal footy season structure.

After all, the West Coast bounced back from a poor start to last season, going on an eight-game winning streak during the middle of 2020. All they might need is a little time to get their heads back into playing normal footy.

Turning to the positives, Eagles flyer Jack Petruccelle showed us why the West Coast have stuck with him for so long.

Questions have previously been raised about whether the 22-year-old could cut it at this level but his performance on Saturday night put all those doubts to bed.

He was arguably the Eagles best afield, putting little wrong all night and showed some excellent match awareness to boot four goals from open play.

Poaching the ball off multiple contests, Petruccelle impressed with his speed and his lightning-quick reactions to mop up the footy and boot home for four very well taken goals.

His third was perhaps the most impressive, though. Collecting the ball in the middle of the park, Petruccelle showed how lethal he can be rebounding forwards up to the opposition arc.

A bright spark on from Saturday, hear from Jack Petruccelle… pic.twitter.com/v64iU4yDDU

Striding forwards at an elite speed, the young forward wasn’t going to be caught with the football in hand and advanced to sling a beautifully weighted banana kick around the Saints’ goal.

After this performance, small forward Petruccelle may have gone a long way to securing himself a permanent place in the Eagles 22.

Brander had a stormer in the first half, taking four intercept marks in the opening term while stepping back to help the Eagles backline defend in place of injured Shannon Hurn. With his tall frame, Brander slotted into the centre of the park well and looked comfortable under the high bombs the Saints delivered into the Eagles half.

But his kicking game was also superb. Rebounding forward after intercepting a mark in the middle of the park, Brander moved upfield quickly to catch the Saints on the break and put a huge bomb forwards to Liam Ryan inside the 50, who kicked for six just before the second quarter.