West Coast Eagles > News > Analysis > Round 5 Preview: Backs To The Wall Footy, Will It Wash On Friday?

Round 5 Preview: Backs To The Wall Footy, Will It Wash On Friday? 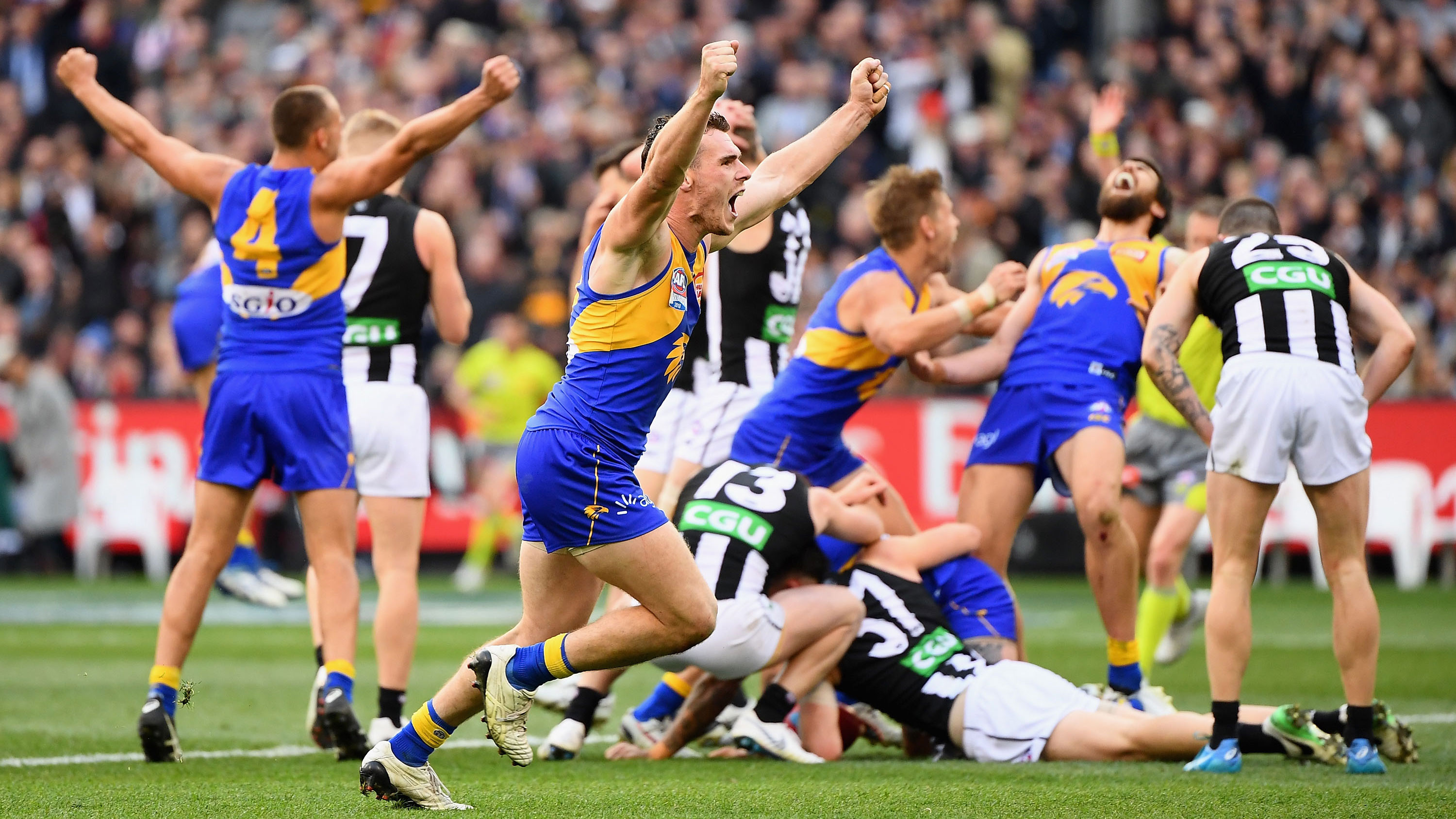 Six months after their devastating elimination finals loss to Collingwood, the West Coast welcome Nathan Buckley’s side back to the Optus Stadium this Friday.

Always a classic in the footy calendar, Eagles vs Magpies has delivered some incredible contests in the past.

And this weekends’ match is set to be another blockbuster, with both teams looking to rebound after suffering horror losses to St Kilda and GWS last weekend.

For Collingwood though, the stakes in Friday’s match are perhaps a little higher.

Sitting at a lowly 14th in the league, with head coach Nathan Buckley’s job very much in peril, the Pies desperately need to find a good run of form if they are to secure a spot in this year’s finals series.

Shocking everyone with their incredible performance against the West Coast in the finals last year, the wheels have slowly been falling off for Buckley’s side.

First came the disastrous trade period, where the pies acrimoniously forced midfield star Adam Treloar out of the club. Bizarre.

And as expected, that chaotic off-season has had a pretty damaging impact on the Pies form.

Collingwood have gone 1-3 at the start of what’s been a very underwhelming campaign for the Victorian side, suffering consecutive losses to Brisbane and GWS over the past two weeks.

But if you thought it couldn’t get much worse for the Pies, it has.

After their loss to GWS at the weekend, Fox Footy reporter Tom Morris yesterday revealed massive player unrest among both senior and junior members of their list, with some claiming Nathan Buckley “is not the coach he was in 2018 or 2019.”

“Leaders such as Brodie Grundy and Jordan Roughead have been vocal in their frustrations internally,” Morris Wrote on the Fox Footy website. He also commented on the fallout from this summer’s Treloar transfer stating “senior players and staff were perplexed by the ‘we don’t want you’ mantra directed at the midfielder.”

It seems like it’s the beginning of the end for Nathan Buckley at Collingwood but there are a few reasons why we can’t assume anything yet, Mark Robinson writes. https://t.co/1JOmVtiYKY

Is this the beginning of the end for Nathan Buckley?

It could well be, if his side aren’t able to string together a few wins in the coming weeks.

That means the pressure is on Collingwood to rescue four points against the Eagles this weekend.

And that’s also why the Magpies could be a pretty big threat this weekend.

After making the 2020 finals by the skin of their teeth, Collingwood travelled to Perth to face off against the Eagles for the first elimination finals match of the series.

From the start, the odds were stacked against the Pies.

The Eagles had the home advantage but also had several key players, including Luke Shuey and Jeremy McGovern, returning from injury to play in the match.

On top of that, Collingwood also had to quarantine for seven days, with half of their travelling party being housed in caravans on a golf course.

Then, there was the ‘dirty Pies’ slur, which the WA news outlets branded on the travelling Magpies cohort.

The smear had the reverse effect of what was intended, with Pies captain Scott Pendlebury claiming that the abuse motivated his side to come up with one of the most gutsy, well-executed team performances we’ve seen in a long time.

Collingwood obliterated the Eagles in the opening quarter of the match, with Mason Cox bagging an early hattrick of goals, while Levi Greenwood worked wonders to nullify rebounding midfielders Tim Kelly and Liam Duggan.

So why is this relevant?

Considering Pies’ current situation, Nathan Buckley will certainly be firing his side up to play a similar game plan to upset the odds as they did six months ago.

That’s why Collingwood are going to be very dangerous on Saturday.

Let’s also acknowledge first that the Eagles are, like Collingwood, coming into this clash off the back of a horror defeat to St Kilda last week.

Going MIA in the second half, the West Coast let the Saints walk eight consecutive goals past them, even after holding a 33-point lead in the third quarter.

Looking back at 2020, it was multiple losses at the start of the campaign that ultimately cost the West Coast fourth place.

That will give the Eagles an extra incentive to undo last weekend’s poor second-half performance, as a loss could see them slip out of the top eight.

But to get the win, they’ll have to play to their strengths, and that starts in their defence.

How Can The Eagles Beat Collingwood?

Collingwood’s biggest issue right now is their strikeforce. Brody Mihocek, Jordan De Goey, and Mason Cox can all hit a wonder goal from anywhere on the field, but they’ve been awfully mediocre when it comes to winning the footy inside the 50.

Collingwood’s scoring efficiency against GWS was abysmal, capitalising on just 29% of their 52 entries into the Giants 50 while taking a lowly six marks from 52 of those entries.

That means defence is going to be where the West Coast can win the match on Friday night.

With Tom Barrass, Jeremy McGovern, and Brad Sheppard all having superb starts to the season, the Eagles can take the match away from the Pies by turning over possession at the back and rebounding upfield with pace.

GWS shocked the Magpies on the counter-attack last week, using their blistering pace and some slick handball moves to blow Nathan Buckley’s side away.

That’s where the Eagles can utilise players like Liam Ryan and Jack Petruccelle, who can both use their elite speed to break away from the contest and gain yards upfield.

It’s also no secret that Collingwood have been leaking goals from open play this year, conceding over 60 points in each of the four matches they’ve played this year.

This shaky defence will be made worse as the Pies will be without roving midfielder Taylor Adams, who suffered a medial collateral ligament tear at the weekend. His absence will undoubtedly leave a hole in midfield, which the Eagles won’t hesitate to capitalise on.

Liam Ryan and Brayden Maynard are due to resume their long-standing rivalry this weekend.

Although this battle probably won’t decide the fate of the match, it’s due to be one of the most gripping stand-offs we’ll see this year.

The feud goes back to the 2018 Grand Final, where Ryan landed a pretty big bump on the half-back, igniting scuffles around the field, adding a bit of extra fire into an already spikey game.

It reappeared again in the 2020 elimination final, with a bit of showboating from Ryan that was followed by a couple of big bumps from Maynard, leading to more scuffles across the ground.

We’re excited to see the pair go toe-to-toe again, even after they shook hands and walked off the field together in their last meeting.

Both teams are under pressure to find a big result this weekend following their round four horror shows.

Fearful of the consequences of another loss, the Pies will throw everything at the Eagles on Friday night, making them a very unpredictable and dangerous opponent.

But the Eagles are in a similar situation. Although they’re not heading into freefall like Collingwood, they are struggling with some early season teething issues.

Like the Pies, they’ll also be gunning to make amends from last weekend’s shock loss to St Kilda.

We’ve already seen them bounce back once this year to completely obliterate flag favourites Port Adelaide, after their abysmal performance against the Dogs in round two.

That makes the Eagles a favourite to win this one. If they can turn the ball over in defence and rebound at pace, they’ll have no problem breaking through what is likely to be a much-changed Collingwood side from last week.