West Coast Eagles > News > Analysis > Oscar Allen – How Good Can He Get?

Oscar Allen – How Good Can He Get? 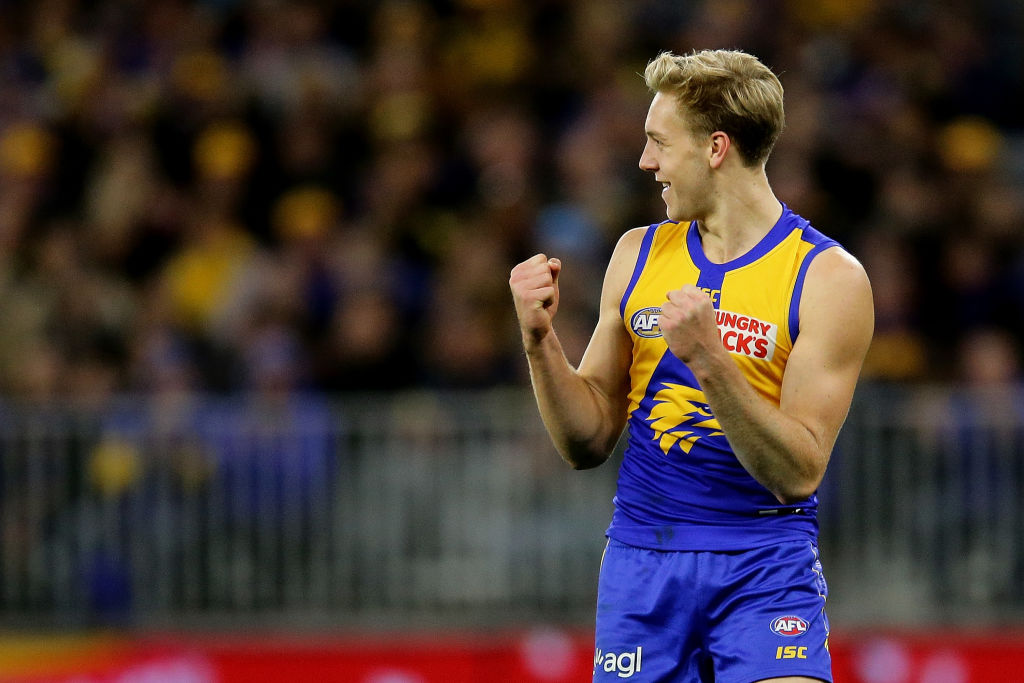 It’s been a blinding start to 2021 for hot prospect Oscar Allen.

Having already racked up 14 goals in just five games, Oscar Allen is now only four goals off his tally from last year.

And he doesn’t look like he’s going to be slowing down any time soon.

Scoring five goals on Friday night against Collingwood, the young forward was outstanding against the Pies, causing all sorts of issues for Nathan Buckley’s defence.

Over the last five games, Allen has seriously impressed in the air and on the ground. Particularly against Collingwood, his pressure on the ball inside the 50 was immense, showing off his elite work rate to get to each contest while putting in some massive tackles higher up the field, notably on Pies’ defender Chris Mayne right in front of the sticks.

“He loves putting pressure on, he loves doing the little things, and he’s a leader in his own right,” Eagles head coach Adam Simpson said after Friday night’s win.

His recent form has lead us to ask the question of whether he’ll be in with a shout for a few awards this season?

The young forward has picked up an impressive haul of 16 coaches votes already this year, pulling in nine from his performance against the Pies this weekend.

He also leads the Eagles race for the Brownlow Medal, receiving three votes for his performance against Gold Coast in round one and two from last Friday.

But let’s not get too far ahead of ourselves just yet.

Yes, Allen has been perhaps one of the Eagles best so far this season, and if he continues at this rate, he’ll absolutely be in the mix for a best and fairest medal come the end of the year.

But Eagles coach Adam Simpson has said he’ll be hoping to “keep a lid” on Allen’s rise, no doubt to ensure the young defender continues to develop under the stewardship of Eagles strikeforce Josh Kennedy and Jack Darling.

And with Oscar Allen’s contract due to end at the end of the 2022 season, Adam Simpson will also be keen to protect one of the most promising players in his squad.

It’s no secret that several rival clubs have been rumoured to be preparing lucrative offers to tempt the young forward away from Perth in the next year.

“He (Allen) is going to have ups and downs; he’s still pretty young,” Adam Simpson said. “But while we’ve got some experience around, he’s having a good apprenticeship.”

“I think what’s happened is Kennedy and Darling have really complemented the development of Oscar Allen. It’s been two or three years now, and he’s a very mature player.”

Kennedy and Darling have been excellent to help mentor and provide that space for Oscar Allen to break away from key defenders and get his hands on the football.

We saw it in action on Friday, with Josh Kennedy occupying tall defender Jordan Roughead for most of the match, giving Darling and Allen a little more freedom to capitalise on mismatches inside the 50.

The issue for Allen now is whether teams will start to alter their defensive strategies to lump more pressure on the young forward.

Obviously, that works conversely, opening up more space for Kennedy and Darling, who are equally as dangerous when there are bombs coming into the forward 50.

But it’s also clear Allen can handle the added pressure, looking at the unbelievable screamer he rose to take against the Pies on Friday night.

Allen’s abilities in the forward positions are too good to go amiss. And despite his versatility to play around the park, it looks like the Eagles have settled on playing him higher up the field.

“He can play anywhere – in the ruck and down back. But if I’ve got anything to do with it, I think he’ll stay forward,” Eagles forward Josh Kennedy said in a press conference on Friday.

“Oscar will start to develop into one of those players that the opposition will have to start really locking down.”

Alongside Josh Kennedy and Jack Darling, the trio are perhaps the most prolific forwards line in the league, having bagged 42 goals between them already this year. Plus, with both Nathan Vardy and Bailey Williams coming back from injury, the Eagles have enough cover at the ruck to allow Allen to sit forward.

“Sometimes his (Allen’s) talent and ability can be a lot better than the third tall (defender) that needs to take him, or there’s definitely a mismatch somewhere along the line with me, Jack and him,” Kennedy continued.

“We’ll keep trying to isolate those mismatches – whether it’s Jack or whether it’s Oscar – and utilise them to hopefully kick some goals and win games.”

Although the Eagles are keeping a lid on it, it’s safe to say the sky’s the limit for gun forward Oscar Allen.