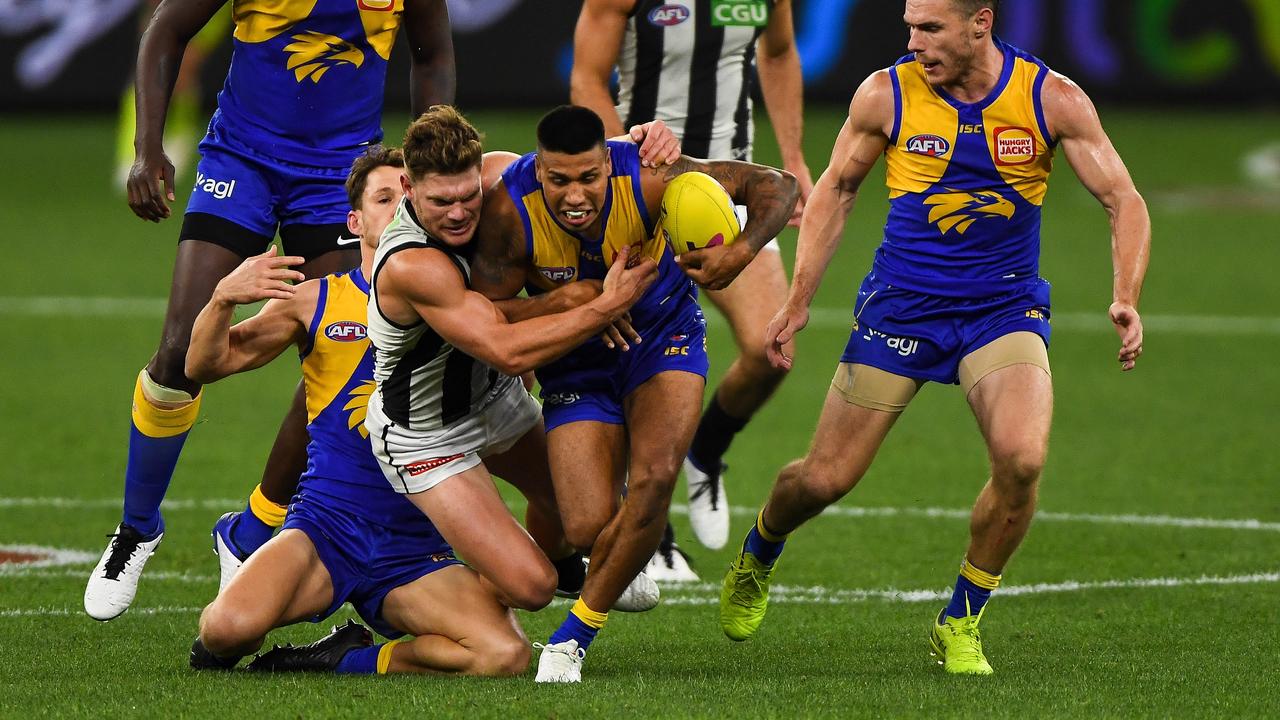 The West Coast will take on a struggling Geelong side who will be without both Patrick Dangerfield and Mitch Duncan this weekend.

You could say the Eagles are cursed when it comes to playing away at the Cattery, looking at the West Coast’s record at the GMHBA Stadium.

Having not won away against Geelong since June 2006, the Eagles have one of their best opportunities to undo that 15-year hex.

But with the Cats very much on the ropes after a sluggish start to the season, the West Coast stand a good chance of securing their first away win of the year this weekend.

Teetering On The Edge

Securing the services of marquee forward Jeremy Cameron in the 2020 draft, the Cats signalled their aspirations as a contender for this season’s premiership flag.

But Chris Scott’s side have failed to live up to the hype going 3-2 in the opening five rounds of the season.

Starting the year with a shock upset to the Crows while falling behind to a resolute Demons side in round four, the 2020 premiership finalists have looked shaky, to say the least.

And although they defeated last year’s league runners-up Brisbane, they only did so by a point and were rather lucky with some of the decisions that went in their favour. They even struggled against Hawthorn, holding out against the Hawk’s advances to clutch a five-point win.

Their problems are a lot deeper than what may appear, and lifting the lid on why the Cats have been so poor this season, we’ll find that they’ve simply struggled to control the football and make their chances count inside the 50.

Yes, Patrick Dangerfield and Jeremy Cameron have been out for the Majority of the season, but without them, their forward line has struggled to score goals.

Things have gone from bad to worse for Geelong this week, with Dangerfield now set to be out for another long layoff with a syndesmosis injury.

.@GeelongCats star Patrick Dangerfield has been picked up by his Dad from hospital following surgery on his right ankle. On crutches. Now for the long road to recovery (around 8 wks) but not before the long drive home to Moggs Creek in the back seat. See exclusively @9NewsMelb

Considering everything going on at the club in the past three weeks, if Geelong can’t scrape a win against the West Coast on Saturday, they will surely be teetering on the verge of a collapse.

But that’s also a big problem for the West Coast.

Geelong have a tough run of fixtures coming up, with away matches against the Swans, the Tigers, and the Saints all in the next four weeks.

And with the Eagles also not in great shape, having had a slow start to the year, Geelong will know the importance of picking up four points from their final home game before they hit the road next week.

The other bad news for the Eagles is Chris Scott announced last week that two-time All-Australian Jeremy Cameron would make his debut at the GMHBA this Saturday.

"Ready to go. He's in." pic.twitter.com/aPX0OqhM3B

“He’s an A-grade talent,” Adam Simpson said of Cameron in a press conference on Wednesday. “We’ll have our hands full with him and Tom Hawkins down there.”

Cameron is a tall goal-scoring machine and will be a direct replacement for the injured Paddy Dangerfield this weekend. He’ll make up a prolific strike force that will include the elusive Gary Rohan and last year’s Coleman Medal winner Tom Hawkins.

But let’s not forget, Geelong are coming up against perhaps one of the most accomplished backlines in the league. All-Australian’s Jeremy McGovern and Brad Sheppard have been on fire at the back this year, while spoil merchant Tom Barrass has done an exceptional job of locking down the Eagles goal square during the start of the season.

Although Tom Hawkins is a big marking player, currently sitting second in the league for 20 marks inside 50 for the season so far, McGovern and Barrass are equally impressive under the aerial contest. The defenders have taken a whopping 39 and 34 intercept marks already this season, respectively.

Considering the West Coast’s strength at the back, kicking deep will be an issue for the Cats.

We’ve also noticed that once they do recover the footy inside 50, Geelong have been wasteful with their chances. Last week, the Cats converted just 27 of their 64 entries into North Melbourne’s 50. That’s a very low figure for a side that boast such a prolific suite of attacking talent.

If the Eagles are smart, they’ll try to fluster the Cats forwards and attacking midfielders, pushing them towards the boundary lines to stop them from reaching Hawkins and Cameron on the goal square.

“They’re a good side; they’ve won three games. They haven’t played their best footy, neither have we,” Adam Simpson said this week, reflecting on both the start to the 2021 season.

It’s also been a sluggish start to the year for the West Coast, who have struggled to perform over four quarters in the five matches they’ve played this year.

Contested possessions have been the key for the Eagles but also their undoing.

Failing to apply pressure and win contests around the ground, the Eagles have succumbed to the intensity of teams like St Kilda and the Bulldogs, who have out-muscled them at the contest across the park. And that’s definitely been a huge factor for why the West Coast have struggled this season.

“What we need to do is embrace the contest; that is the number one focus this weekend,” half-forward Jamie Cripps told 6PR radio this week.

Nullifying Cats midfielders Joel Selwood and Cameron Gutherie at the contest will prove vital if the Eagles are to get the win on Saturday afternoon.

The ruck will also be a focal point for Adam Simpson’s side. Geelong sit 17th in the league for hitouts this year, with Rhys Stanley struggling to get things going for the Cats at the stoppage.

Nic Naitanui will be licking his lips at this stat. And while he wasn’t as effective at the stoppage last week, he still provided Tim Kelly and Andrew Gaff with some brilliant tap downs, flicking the ball behind him on occasion to Gaff to allow the rovers to rebound upfield and launch attacks into Collingwood’s 50.

As for the Eagles forwards line, they’ll be without their spearhead Josh Kennedy this weekend, who suffered a knock to the ankle last weekend. In his place, gun striker Oscar Allen will get his chance to take over the full forward position, with Zac Langdon or Jarrod Brander likely moving up to the forward line to take Allens’ vacant spot.

But after steadying the ship against Collingwood last week, a win away to Geelong on Saturday could prove to be a huge turning point in the West Coast’s season. Four points could even see them shoot into the top four for the first time this year.