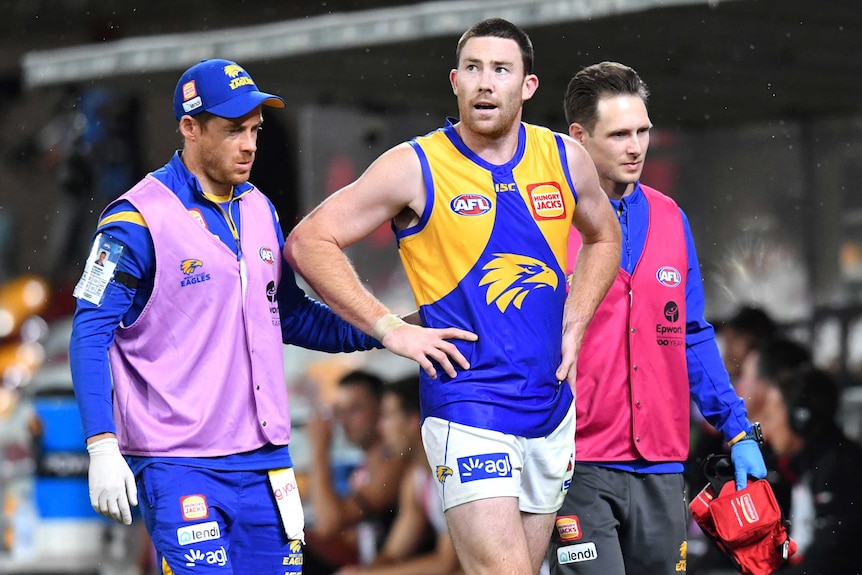 All-Australian duo Josh Kennedy and Shannon Hurn will be available for selection ahead of Sunday’s Western Derby, while four-time All-Australian defender Jeremy McGovern will be out for two weeks.

West Coast General Manager Craig Vozzo has confirmed the Eagles will be without Marquee defender Jeremy McGovern for two matches.

McGovern limped off the field with a groin injury in the Eagles 97-point loss to Geelong last weekend.

“He’s likely to miss a couple of weeks,” Eagles Director of Football Craig Vozzo told the club website this week.

“It could have been a worse scenario, so we’ll take a couple of weeks at this stage and go from there.”

West Coast spearhead Josh Kennedy was back running today in a bid to be fit for the Western Derby, reports @tommorris32.

McGovern, who is currently ranked 10th in the league for total marks taken, will miss Sunday’s RAC Derby against Fremantle, and on the Eagles round 8 match against Hawthorn the week after.

But the Eagles will be boosted by the return of two-time Coleman Medalist Josh Kennedy, who missed last weekend’s match with a sore ankle.

“Josh pulled up sore with that ankle, but the week off has been terrific for him. He did a bit of training yesterday and we’re expecting him to be available for selection if he gets through, which we expect him to,” Vozzo confirmed.

Shannon Hurn and Jack Petruccelle will also be available for selection this weekend, with Hurn able to better Dean Cox’s club appearance record, playing his 291st game for the West Coast this weekend.

Hurn suffered a calf strain in the Eagles round four match against St Kilda, while speedster Petruccelle seems to have recovered well from a tight hamstring.

“Shannon and Jack Petruccelle have both undertaken a similar rehab regime for the calf and hamstring, respectively,” Craig Vozzo confirmed.

“They both signed off their relevant medical testing and strength and conditioning testing last weekend.

“All being well they’ll get through training this week and be available for selection.”

Meanwhile there’s some promising news for Eagles Midfielder Elliot Yeo, who has been battling through a prolonged osteitis pubis injury.

The player told has told 96FM yesterday that he’s now in “pre-season” mode and is encouragingly “ticking boxes” on his way back to full fitness.

Adam Simpson also confirmed on AFL Nation that Yeo could be back just after the mid season bye round, along with Eagles captain Luke Shuey, who recently underwent surgery to repair a an ongoing hamstring issue.

Half-forward Jamie Cripps also spoke on Triple M Radio on Wednesday, advising he’d “pulled up well” and would be in the mix for selection after sustaining a crack to the ribs against the Cats last weekend.