Was Decision Making The Eagles Downfall On Saturday? 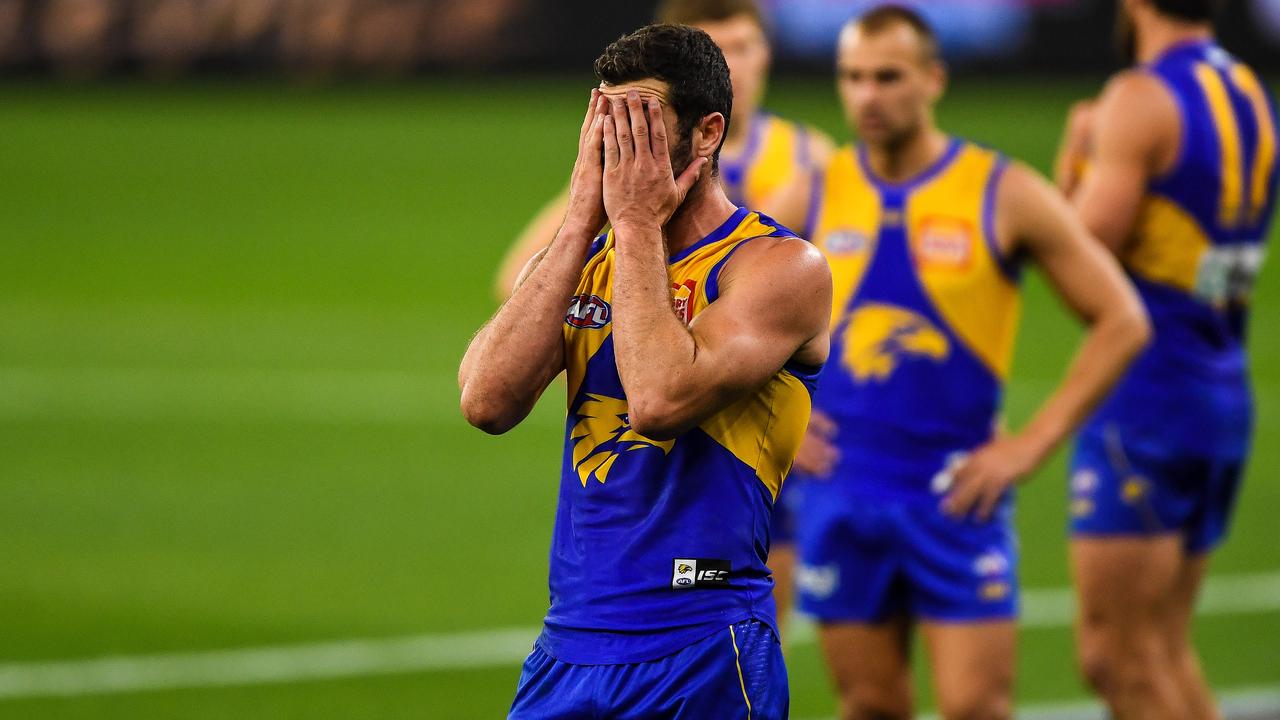 Frustratingly familiar performances, like last Saturday’s 97-point loss to Geelong, are going to cost the West Coast Eagles come the end of the season.

Losing matches is a part of football, and although a loss is never acceptable in elite sport, it can be mitigated if the team go out to play good footy and challenge their opponents.

The fact is the Eagles performances in their last two losses have been lacklustre.

The shock round 4 defeat to St Kilda was the start of the issue. Throwing away a 33-point lead after outclassing the Saints for most of the first half, the Eagles took their feet off the gas pedal and went MIA towards the end of the match.

The worrying part is the West Coast haven’t leant their lesson from the Saints loss, and despite battering Port Adelaide in round three and cruising past Collingwood in round five, Saturday’s humiliation against Geelong was a step backwards.

“We got to quarter-time (against Geelong) a goal up, right in the contest, so it’s happened twice this year where we’ve been in really good positions to have a good game, and we haven’t halted momentum,” Head Coach Adam Simpson said on radio 3AW this week.

“Arresting momentum is something we’ve been OK at over the years.

“But there’s been two times this season where it hasn’t been good enough, so we’ll work on that from a coaching point-of-view, and we’ll look to keep growing from a leadership point-of-view while we’re missing a few senior players.”

Admittedly, missing a spine of key players didn’t help the West Coast at the weekend, but there were still enough senior players on the pitch who could have stood up to drag the team through the second quarter.

But as much as a lack of effort and leadership were an issue throughout the match, the Eagles’ decision-making was perhaps one of the biggest problems that stopped them from turning the tide in momentum.

When To Go And When To Stay?

Defensively, the Eagles were poor. Granted, you’re always going to have a tough time coming up against Gary Rohan, Tom Hawkins, and Jeremy Cameron. And losing All-Australian defender Jeremy McGovern before half time didn’t help the Eagles cause either.

But even when McGovern was still on the pitch, the Eagles’ decision-making in defence left a lot to be desired.

When coming up against such an elite and fast-moving strikeforce, defenders should look to make it as hard as possible for their opposition to get any space in front of the goal.

Unfortunately, the Eagles could not do that on Saturday, with Brad Sheppard struggling to control Gary Rohan for most of the match.

Leaving Rohan unmarked on multiple occasions, Sheppard afforded the Cats’ strike man far too much room to build up momentum and get the run on him.

We know how devastating Rohan can be under the high ball when he gets up to full speed, but he can be controlled if you’re able to suppress his run-up. With the Eagles defenders standing off on Rohan, the agile forward was able to get up to take some superb marks and kick a hattrick of goals during the match.

The Eagles also made the mistake of committing too many bodies to each contest.

Although there’s been a lot of talk about the West Coast needing to put in more effort and have a greater impact on the game, the Eagles need to balance that with their footy smarts and not over-commit at each contested mark.

During the second quarter, we saw four Eagles defenders, including key full-backs Tom Barrass and Brad Sheppard, go up to contest a pack mark against only one Geelong player.

That is poor game management. And with Barrass and Sheppard both tied up in the same contest, that left Geelong forward Tom Hawkins free to get around the back of the contest to collect a fumble and stride home for one of the easiest goals he’ll put away this year.

That was another huge issue for the West Coast, and it happened multiple times during the game.

Tomahawk gets out the back and the Cats are rolling!#AFLCatsEagles pic.twitter.com/ShyW89cmCd

When you get to the stage where you start to leak goals, it’s hard not to want to try and make an impact and over commit to a contest like that.

That sort of passion and energy should always be welcomed on a footy pitch. But games aren’t won by passion and brawn; they’re won by playing smart and knowing when to sit back and when to challenge for the intercept.

As the Cats’ started to put through more goals, the pressure quickly mounted on the Eagles.

That’s when the West Coast started to make some poor decisions that they wouldn’t usually make if they were in control of the match.

Dom Sheed failed to convert an easy free kick in the opening quarter, Andrew Gaff missed an important tackle that led to a Geelong goal in the second term, while Nic Naitanui had a hard time covering Cats’ ruckman Rhys Stanley throughout the game.

Meanwhile, Geelong did an excellent job of herding the West Coast into their own 50, forcing the Eagles to concede a -26 pressure differential, the worst by any side in the 2021 season so far.

That’s when the Eagles started to shovel poor disposals, got caught in compromising positions, and couldn’t revert to their basic system of moving the ball around in the backfield, and that’s what stopped them from arresting momentum against the Cats’.

With the Western Derby coming up on Sunday, the Eagles need to focus on keeping their composure and making the right decisions if they are to go 11-0 against a flying Fremantle side, who have had a brilliant start to 2021.

The Dockers will no doubt be looking to lock the Eagles deep into their own 50, and that’s why decision-making in both defence and attack will be vitally important for the Eagles if they are to bounce back from last weeks loss.