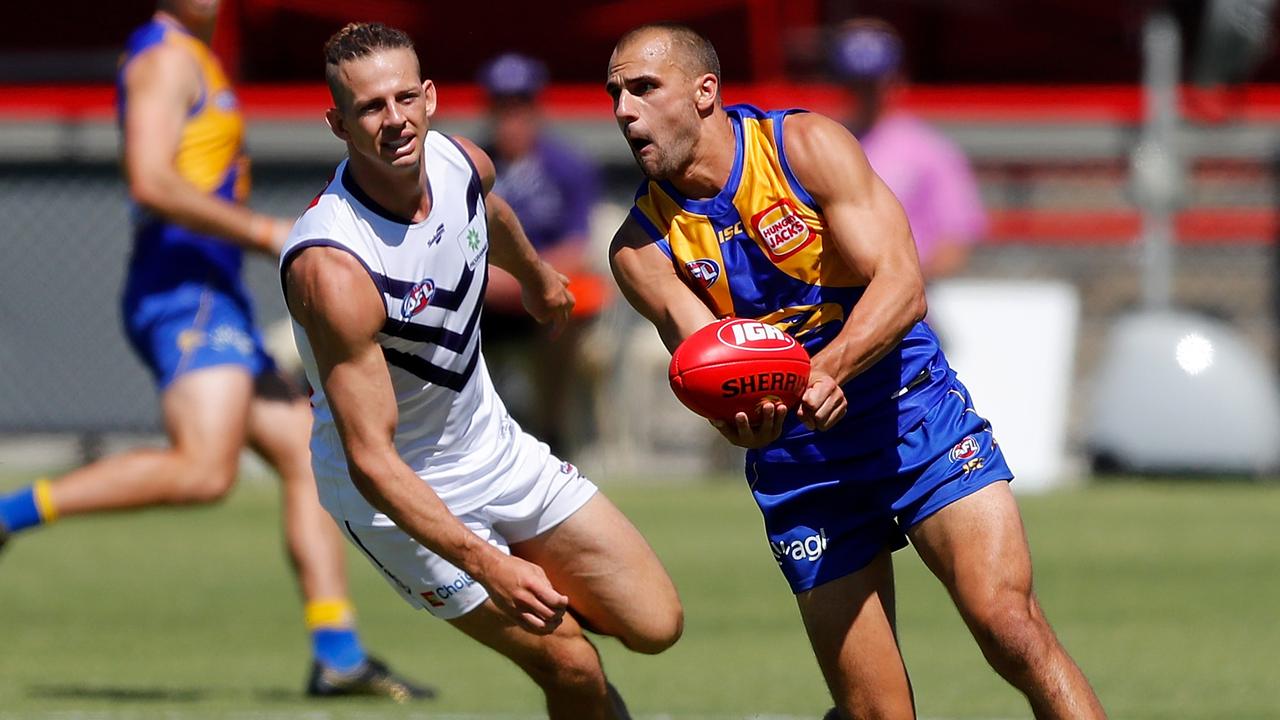 In front of an empty Optus Stadium, the West Coast demolished WA rivals Fremantle to provide a huge response from their terrible loss to Geelong last weekend.

After Adam Simpson labelled his side as “embarrassing” and “weak”, the Eagles made a massive statement on Sunday afternoon, kicking a string of eight consecutive goals in the second half to win the Western Derby 20.12 (132) to 11.7 (73).

The 59-point win was the response the Eagles needed after their humiliation at Kardinia Park last weekend. While it was a shame there were no crowds in attendance, we were treated to a spectacle of footy, with both teams going coast to coast in the opening 40 minutes of the match.

Adam Simpson will be hugely happy with his side’s turnaround from last week, with the West Coast showing excellent work ethic and commitment to shut down Fremantle around the park.

The win was made even sweeter for the Eagles, who claim their eleventh straight victory over their local rivals, but even more so through the performances of some of their younger stars.

With Shannon Hurn, Jeremy McGovern, and Tom Barrass all absent from the side with injury problems, Oscar Allen dropped into the backline to have an outstanding game causing all sorts of issues for the Fremantle forwards. He was flanked by young defender Harry Edwards, who looked composed on the footy, in only his second game for the Eagles in the AFL.

The West Coast were also buoyed by the return of young flyer Jack Petruccelle and champion forward Josh Kennedy, who both kicked goals for the Eagles during the match.

But it was a bit of magic from Jamaine Jones that got the Eagle engines going.

After conceding two goals at the start of the match, Jones showed off some incredible footwork to loop his way around defender Nathan Wilson and kick a superb snap, to open the scoring for the Eagles. That spurred an onslaught of goals from Kennedy and Darling to put the Eagles’ noses ahead at quarter time.

Fremantle came knocking again in the second quarter, with Matt Taberner slotting a brace of goals to steady the ship for the Dockers. But their lead was short-lived.

The Eagles midfield started to swarm the contest in the middle of the park, with Tim Kelly and Jack Redden doing a great job to shut down David Mundy and turn the tide of momentum on the dockers during the second quarter.

Making a career-high 42 disposals and nine tackles to win the Glendinning-Allen Medal, Tim Kelly was by far the best player afield. Reminiscent of his performance against St Kilda last year, Kelly was brilliant cleaning up the loose ball at the contest while nullifying Andrew Brayshaw in the middle of the park.

Andrew Gaff was impressive too. Recording 35 disposals while booting his first goal of 2021, Gaff kept the Eagles scores ticking over to keep the heat on Fremantle in the second term.

Getting more men to the contest higher up the field, the Eagles won the ball back through their pressure and managed to put through another five goals in the second term. New recruit Zac Langdon and young half forward Jake Waterman got their names on the scoresheet to give the West Coast a 13-point lead at halftime.

Unlike other performances this season where the West Coast have dropped off after going ahead, the Eagles pushed even harder on Fremantle, with the direction of the score worm pointing in the Eagles favour for the majority of the second half.

Kicking eight consecutive goals in the third and fourth terms, the Eagles looked like they weren’t going to let this match slip away from them. Jamaine Jones initiated another scoring sequence that saw Jamie Cripps, Nathan Vardy, and Jake Waterman all kick goals before three-quarter time.

But they weren’t finished there, with Jack Darling, Zac Langdon, and Jarrod Brander finishing the scoring off in the final term to secure a massive win for the West Coast Eagles.