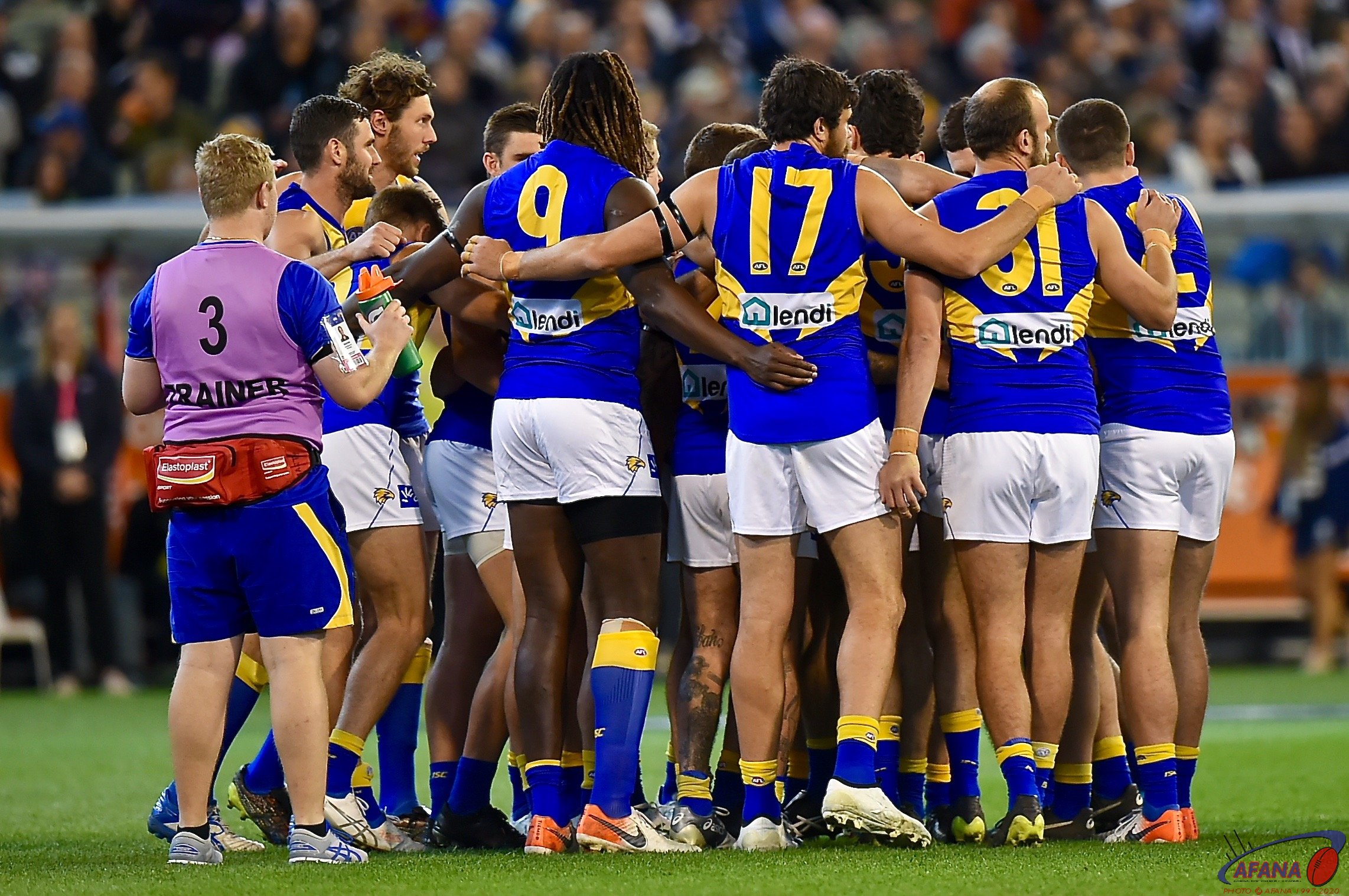 Having smashed their way past Fremantle this weekend, Adam Simpson believes consistency is the focal point for this rebounding West Coast side.

Sunday’s 59-point win against Fremantle was the rebound the Eagles needed.

After their humiliating loss to Geelong in round six, Adam Simpson demanded more of his side, who have struggled this season to perform over a full four quarters.

Consistency has been a huge issue for the West Coast at the start of the season, with the Eagles failing to function throughout the entirety of several games this season.

“We were obviously disappointed after last week, we just wanted to get back to playing our roles, playing our system,” Eagles Head Coach Adam Simpson said after the match on Sunday.

“The four-quarter effort was there today, the first time for probably the year, so really proud of our players.

“I thought our mids stood up, particularly in the third quarter, and allowed us to have the field position we were looking for. Our forwards finished off the good work.”

Tim Kelly, Andrew Gaff, Dom Sheed, and Jack Redden were superb in Sunday’s win and were the engine room that allowed the West Coast to push for that 8-goal haul in the second half.

Kelly, in particular, had his best game in an Eagles jumper yet, perhaps even in his career. Despite not taking a single mark during the match, Kelly played an integral part in getting the West Coast on the front foot during the match, amassing a whopping 42 disposals and nine tackles during the game.

“What’s special about Tim at the moment, and I’ve seen him do it last year in the St Kilda game as well, when we really need him to step up for us, he’s tried his absolute best to do that,” Simpson said.

“I thought he complimented our mids; winning the medal was great for him, but I thought the collective of our midfield group played a really important role towards our win.”

Together, when this Eagles midfield gets going, they are a tough team to play against. The speed, experience, and work rate of all four of them, even without Luke Shuey and Elliot Yeo, is pretty phenomenal.

The problem for the Eagles is getting consistent performances not just from the midfield but the entire team. And performances over the full four quarters of the match.

“It’s not about winning every week, and I think the game and the season is just if you’re off a little bit, you get hurt a lot, is what we’re seeing,” Simpson said.

“I’d just love to see us play our best version of what we look like as a team. If we’re not good enough, that’s fine; that’s football. But trying to play near our best, and win or lose, that’s our goal every week.

“So, we’ll have the similar focuses we’ve had all year really, and really try and hone in and play the best version we can play.

“Our challenge is to be consistent every week, and I think a lot of clubs are finding that difficult, and we’re no different.”

Premiership duo Dom Sheed and Liam Ryan have locked in contract extensions ahead of this Sunday’s Western Derby. #AFL#WestCoastEagleshttps://t.co/ToRiXOt9WN pic.twitter.com/5G01rWAgqt

That means the Eagles will need to step up their performances away from home. Before going on their eight-game winning streak last season, the Eagles similarly struggled on the road, and perhaps this year’s poor away form is similarly just a teething issue the West Coast are going through.

But there is no excuse for the manner in which the Eagles lost against Geelong last week. That’s why this Sunday’s game against Hawthorn will be a huge match for the West Coast, both in terms of building confidence and in terms of points.

“Our next challenge is having a good go against Hawthorn next week at the G’,” Simpson said to the club website yesterday.

“I don’t think we have to win, but I’d love us to play the brand that we’ve been playing at home, we just haven’t sustained that for four quarters; that our next absolute challenge.”