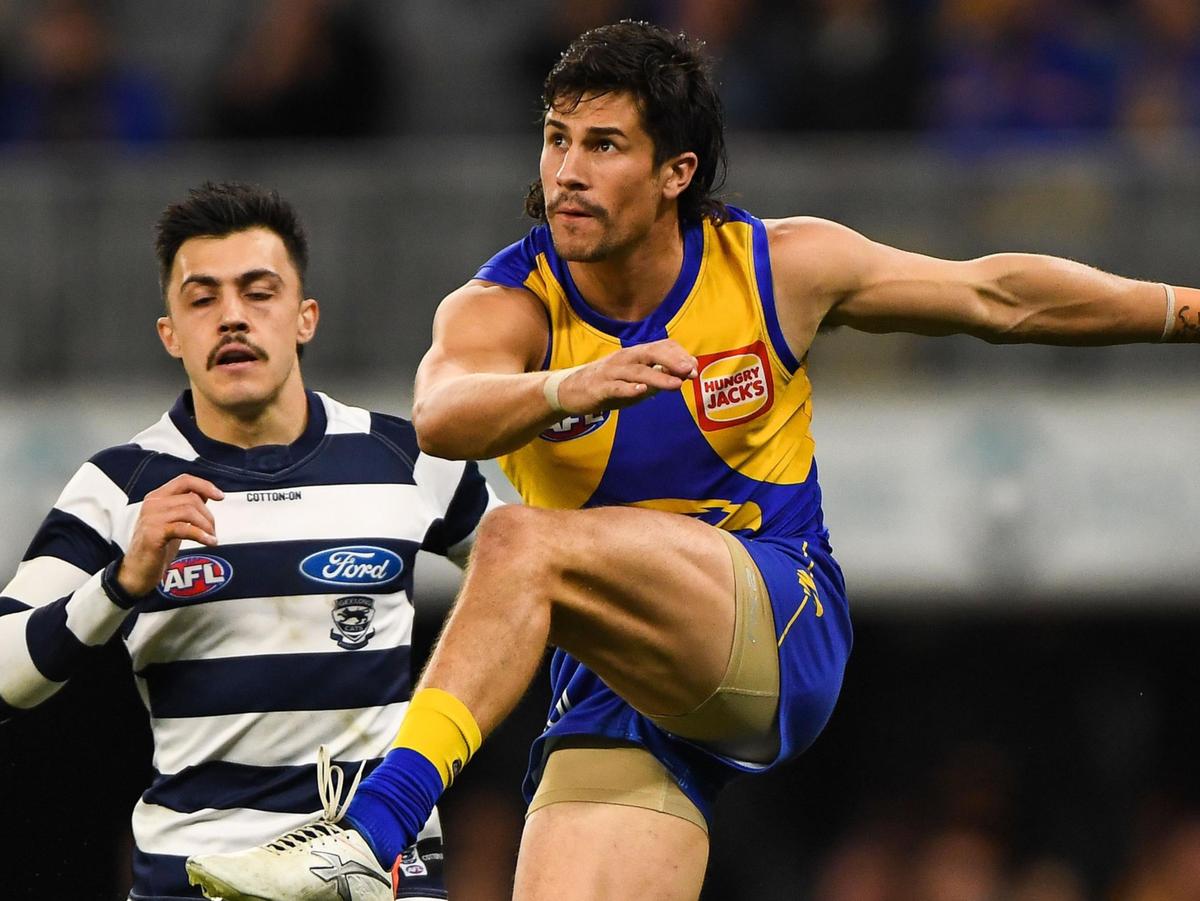 Premiership player Liam Duggan will be sidelined for an extended period after undergoing surgery on his knee this week.

It’s no secret that the Eagles have been struggling with an injury crisis at the start of this season.

As perhaps the worst hit team in the competition so far for injuries, the West Coast currently have seven A-grade players sitting in the treatment rooms, including their captain Luke Shuey.

Although it might not be the longest injury list in the AFL, it’s the manner, timing, and league points that the Eagles have conceded without these key players that make the Eagles injury woes perhaps the worst in the league.

Sure, teams are suffering all around the AFL. Brisbane are without Brownlow Medalist Lachie Neale, the Cats won’t have Paddy Dangerfield back for another eight weeks, and Taylor Adams will be absent from the Pies midfield until the mid-season bye.

But looking at the Eagles list over the first seven weeks, their injury problems have definitely been the worst of the lot.

Losing all three of Tom Barrass (shoulder), Jeremy McGovern (groin), and Shannon Hurn (calf) over the past two weeks, the Eagles have had to scramble a makeshift defence together, with swing forward Oscar Allen dropping back to the full-back position in last weekend’s Western Derby.

Liam Ryan has also been absent for the last two rounds with a hot spot in his shin, and champion goalkicker Josh Kennedy missed the Eagles round six match against Geelong with a calf strain.

A hamstring injury has also seen speedster Jack Petruccelle spend the best part of the season on the sidelines, while tall wingman Jake Waterman played his first game of the year against the Cats, having been omitted from the opening five rounds due to a back issue.

The injury news gets even worse for the Eagles heading into round eight.

7NEWS reporter Ryan Daniels today reported that premiership player Liam Duggan underwent knee surgery on Friday and will not travel to Melbourne for the West Coast’s round eight fixture against Hawthorn.

Tom Barrass will not return for @WestCoastEagles this weekend against @HawthornFC. Trained strongly yesterday, but medicos didn’t give tick of approval.

The Eagles defence will also be down to its bare bones this weekend, with Brad Sheppard suffering an ankle injury in training, while key defender Tom Barrass will not travel to Melbourne after failing a fitness test this week.

Despite a few poor performances this year, the Eagles’ injury crisis does go a long way in explaining why Adam Simpson’s side have gone 4-3 at the start of the year.

There’s more trouble for the West Coast defence, with Brad Sheppard in doubt for Sunday’s clash against Hawthorn. I @ScubaStv pic.twitter.com/W5Hh5Xk5Eu

“On the weekend – Barrass not there, Hurn, McGovern, Shuey, Yeo, Ryan. When does the tipping point come? I don’t know.

“But sometimes you’ve just got to recognise where everyone’s at. Health’s always your best player.”

Looking at the ladder, the teams currently topping the table are those that have suffered the least injuries.

Using player rating statistics from Champion Data, Fox Footy reported last week that the Eagles are the team that have struggled the most from injuries, amassing 145 points for how much they have missed key players like McGovern, Barrass, and Hurn.

Fremantle came in as runners up on 115 points, while the top two teams in the ladder, the Western Bulldogs and Melbourne, sit at a meagre 47 and 46 points respectively, putting them 15th and 16th in the rankings for players missed.

It’s an interesting stat for the Eagles, who have struggled to build a consistent run of momentum this season, particularly away from home.

Obviously, we cannot pin the Eagles’ poor form solely on their injury crisis. With key players still on the field during their losses against the Saints and the Cats, the Eagles problems ultimately lie in their consistency over four quarters.

You could argue that the Eagles have had a bit of a “leadership void,” as ex-Brisbane player Jonathan Brown coined it on Fox Footy.

With players like Hurn, Shuey, and Kennedy all being absent during crucial matches this season, the West Coast have struggled to pull through when their backs have been up against the wall.

But there’s no doubt that the Eagles aren’t the only team struggling with injuries this year.

Compared to last season, there are 25 more injuries listed across the league than there were coming into round 8 in 2020.

Some of those injuries may have been acquired in training or pre-season, but the data shows teams are succumbing to more injuries this season than they were at the same time last year.

It begs the question as to whether the AFL needs re-consider some of its recent rule changes, including longer quarter lengths and the reduced number of interchanges teams are currently allowed.

Brisbane coach Chris Fagan has been one of the biggest critics of the current rules, after his sides round six win against Carlton lasted for over 135 minutes.

“I think one of the unintended consequences of the guard the mark rule and the less rotations is we‘ve got a game that’s increased in length of time,” the Brisbane coach said on AFL 360 two weeks ago.

With players on the ground for longer, there’s no doubt that due to added fatigue, a player’s ability to react to certain situations to avoid contact, like a head collision, is significantly reduced. This could be a cause of why we’re seeing more injuries this season.

Plus longer quarters inevitably means there’s a greater risk of players sustaining hamstring and soft tissue injuries, with their muscles more likely to cramp and tighten the longer they’re on the pitch.

“When players get tired and fatigued, they’re subjected to all sorts of different injuries, their reflexes might not be as good, their bounce when they hit the ground might not be quite so good, that’s called proprioception,” Fagan said.

“There’s lots of things that can contribute to injury, and I’m just a little bit concerned that with games going for so long, shorter pre-seasons and less rotations that there’s potential for a bit of carnage.”

With reduced list sizes, fewer rotations, and greater expectations on players to spend more time on the field, there’s no doubt clubs are going to accrue more injuries this season.

Several games have already exceeded the average playing time of 125 minutes, and players continue to drop like flies, with teams having to activate their medical substitution nearly every round.

The medical substitution is perhaps the only saving grace the new rules have, but it doesn’t solve the problem that footy quarters are becoming too long and are causing more injuries in the game.

Injuries are a part of football, but the amount we’re currently seeing around the league should prompt the AFL to review its current rules.

Reverting to 16-minute quarters, speeding up restarts after goals, and allowing teams more interchanges could all help to improve the situation.