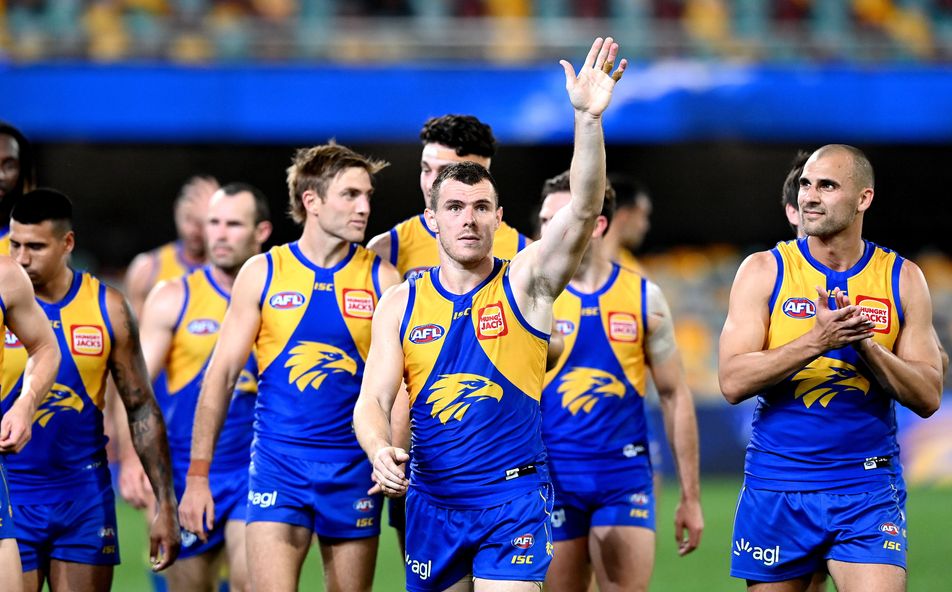 The Eagles captain was seen working in the coaches box during this Sunday’s win against Hawthorn.

Luke Shuey is expected to be out of action at least another four weeks after undergoing surgery on his hamstring, but that’s not keeping the Norm Smith medalist away from the footy pitch.

The Eagles captain looks to have taken up a small role working alongside coaches Adam Simpson and Adrian Hickmott and was seen working inside the coaches box during this weekend’s win against Hawthorn.

“We thought we’d give him this experience helping out the centre bounces with Adrian Hickmott overlooking stoppages,” Adam Simpson confirmed in his post-match press conference on Sunday.

“Because we’re a bit light on with the soft cap and coaches, we’re trying to spread the load. He’s out for a while, and he’s got a real passion for football.

“He’s not our stoppage coach, but he does have a look over things.”

Having suffered substantial financial losses last season, the Eagles are currently running a much tighter ship with fewer staff working at the club. But it seems they are utilising the resources they have at their disposal with Shuey heading upstairs to take a look at things from above.

The Norm Smith medalist is perhaps one of the Eagles best when it comes to the work he does at the contest, and although he missed out on five games last season, he was still in the Eagles top five for the most stoppage clearances, centre clearances, and contested possessions.

No doubt honing in on Shuey’s expertise at winning the ball at the stoppage, the West Coast midfield stunned Hawthorn to score several quickfire goals from the centre bounce on Sunday. Tim Kelly’s combination with Nic Naitanui was impressive, with Kelly operating in a similar role to Shuey, collecting the ball from the bounce, and aggressively transitioning play upfield at speed.

Luke Shuey got to Matt Rowell after the game. All class 🙏

At 30 years of age, Shuey still has some big years of football ahead of him, but this could be a sign of how the Eagles captain could transition into a role within the West Coast’s coaching set up further down the line.

“He’s such a good on-field leader he contributes in the coaches box pretty well, but he’s still learning, and he’s learning quick. He’s been an asset for us. Simpson stated.

“I’d rather him in the middle than in the box, though.”