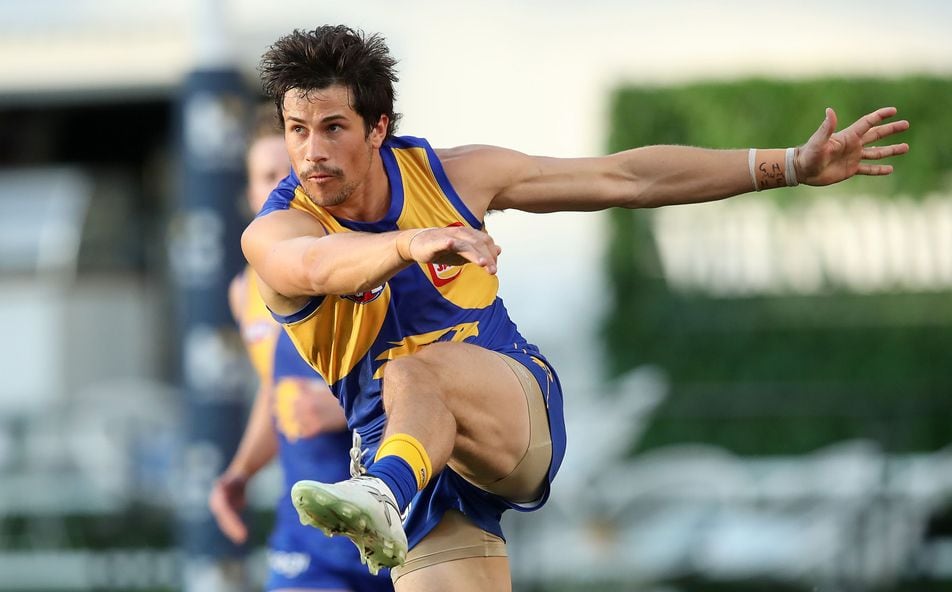 Liam Duggan confirmed on Sport FM earlier today that he is aiming to be fit for the mid-season bye.

Although the outlook is not as bad as initially thought, with Duggan confirming he could be back before the mid-season bye.

“It felt a little bit uncomfortable during the Freo game; there wasn’t any pain or anything like that but it was enough to get a scan, and a follow up with the surgeon later in the week,” Duggan said on Sport FM earlier today.

“Surgery was the option. I just had a little clean out of the knee. It’ll be a week tomorrow since the surgery, and it’s really coming along nicely; the swelling’s coming down already. I’m walking around normally, and hopefully, in a week and a half’s time I’ll be running around at training.

“The bye sort of time will be what I’m aiming for, and anything before then will be a bonus.

“But there’s a likelihood it could be ready before that.”

The premiership midfielder’s short lay-off is the silver lining for the Eagles selectors who are currently managing a vastly depleted squad.

Their treatment room is currently filled with some of the biggest names in the squad, including champion defenders Jeremy McGovern, Shannon Hurn, and Tom Barrass.

“It’s not a great place to be rehab, but it’s quite full at the moment with a few good names that I’ve joined.

“I’m hoping to be disconnected from the main group for two weeks maximum before I can get into some footy and doing a light jog and getting back into it.”

Injuries have been a massive problem for a number of sides this season with questions being been raised about whether the AFL should change the rules on quarter lengths and how many rotations teams are allowed during a match.

Clubs are now having to take multiple medical substitutes on away trips as a precaution, with the Eagles calling Luke Foley up from the WAFL to travel to Melbourne over the past three weeks last week.

“Some boys are taking it right to the last minute to get up for games. Obviously, were back into the normal season with the duration of games being a lot longer, so I think those are the precautions clubs are having to take at the moment,” the Eagles flanker said.

Tim Kelly goes bang, but how good was the kick from Liam Duggan to get it all started?#AFLEaglesPies pic.twitter.com/ZNrKD4lTei

For Duggan, it’s the younger players who have stepped up to lead the team forward. One of those players has been Brendon Ah Chee, who set the tone of the match against Hawthorn last weekend.

“Brendon is a much-loved character around the footy club, and to see him do that on the G’ was great.”

“Bailey Williams did quite a good job as well. But Brendan shone through on the G’ and I think it’s a reward for the work that he puts in. He’s had a couple of little niggles here and there as well so it’s great for him to get his reward.”

Oscar Allen was another player who stood up on Sunday. The swing forward has played nearly every position on the park this season, but Duggan confirmed his hard graft hasn’t gone unnoticed.

“I think we should put him (Oscar Allen) in the midfield and see if he can do it there as well,” he joked.

“For Oscar, up front is where he is most threatening, but for him to be able to play the role he’s playing for us at the moment and swing down back when we need him is superb and it was recognised in the week by our coaching staff and our players.

“He’s doing it without any arguments and is just going down there and doing what he has to do for us. Although I think he will end up forward, kicking a few goals for us.”

Liam Duggan’s mullet has gone to a better place… pic.twitter.com/5GKPMx5fYy

Like Allen, there’s been a lot of speculation as to whether the Eagles will be offering Duggan a new contract. The 24-year-old’s current deal is set to expire at the end of this year and Duggan was able to shed some light on the situation hinting that there may be a few more signings coming pretty soon.

“We’re right in the middle of talking and hopefully close to finishing everything off,” he said on his own contract.

“We’re in a pretty good position with the club and my management are all happy. We’re working through the finer details and hopefully, it’s not too long before everyone else signs on in the near future.”