West Coast Eagles > News > Analysis > Can The West Coast Make It Three Wins On The Bounce?

Can The West Coast Make It Three Wins On The Bounce? 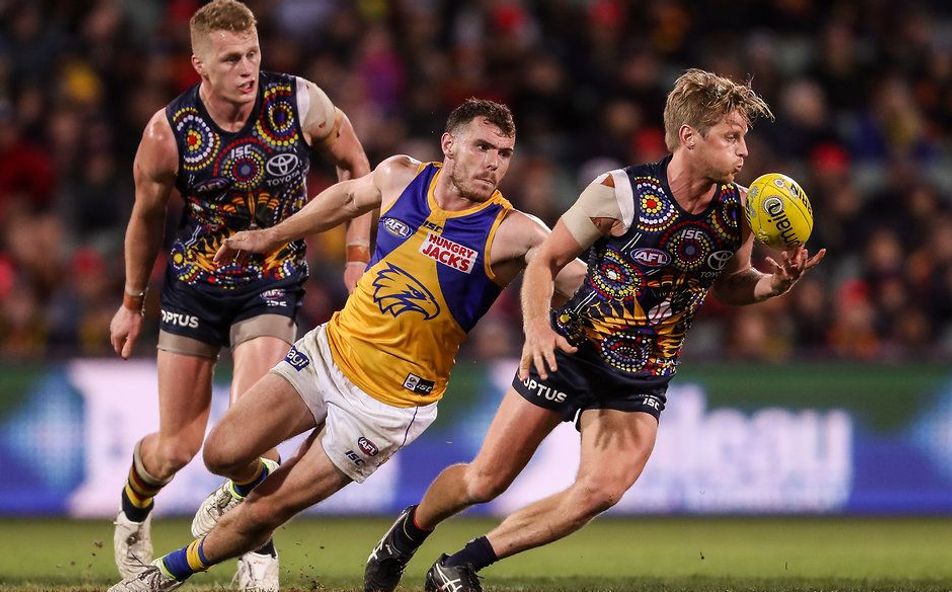 The West Coast Eagles will take on the Adelaide Crows on Sunday night at the Optus Stadium.

With key players still absent from the side, it was a much-changed Eagles 22 who put up an entire four-quarter demolition over the Hawks last weekend.

Bounding in confidence, the West Coast’s next test comes on Sunday night at the Optus Stadium against the Adelaide Crows, who have dipped in form after their strong start to the 2021 season.

Going 3-1 up heading into round five, the Crows’ wooden spoon woes of last season looked far behind them as they orchestrated one of the biggest upsets of the season to defeat 2020 finalists Geelong in the opening round.

Since then, Adelaide have struggled in the league, falling to 13th on the ladder following a four-match losing streak, while conceding several damaging injuries along the way.

Despite their recent form, the Crows are still a dangerous side, and when they get their best footy going, they can threaten the best teams in the league. That’s something Eagles Head Coach Adam Simpson will looking to guard against heading into round nine.

“We’ll just prepare for them at their best,” Adam Simpson said to westcoasteagles.com.au.

“They’re young and enthusiastic, and they have a crack; their intensity around the ball is really impressive; that’s our challenge,” Simpson said.

Holding last year’s league winners to 30 points at half-time, the Crows threw the kitchen sink at their rivals, Port Adelaide, despite ultimately losing last week’s Showdown. If the Eagles aren’t careful, the Crows could cause a few problems again on Sunday.

“They’re a younger side, their best is pretty good, and they’ve had patches where they’ve lost momentum.”

“We’re not too dissimilar to that ourselves.”

Lapses in momentum have been the story of the Eagles season so far. Going off the boil against both the Saints and the Bulldogs, and failing to show up in their away trip to Geelong, the West Coast have struggled to dominate all four quarters of matches.

Although last week’s battering over Hawthorn was a turning point in the Eagles’ season. If they can keep that momentum up at home this week, their quality and experience in midfield will overwhelm this young Crows side.

The Eagles will also be bolstered by the return of champion defenders Tom Barrass and Jeremy McGovern. Having missed out on the last two matches, both players are set to undergo late fitness tests but are highly likely to feature this weekend.

That should free up young swing-forward Oscar Allen, who has been covering the full-back position in Tom Barrass’ absence over the past two rounds. Allen will likely step up to the forward line to play alongside Jack Darling and the club’s all-time leading goal scorer Josh Kennedy, who will also undergo a late fitness test after coming off the field last Sunday with a minor calf strain.

The injury news is not so good for the Crows, who will miss All-Australian midfielder Matty Crouch, small forward Ned McHenry, who fell victim to a nasty swing tackle from Port Adelaide’s Scott Lycett last week, and ruck-forward Tom Lynch with a toe injury.

Things get even worse for Crows fans as Head Coach Matthew Nicks confirmed this week that star goalkicker Taylor Walker would be rested for the match, despite Walker having kicked 27 goals this season and sitting second in the Coleman Medal race.

We’re expecting this weekend’s key battle to be in midfield, with Andrew Gaff and Tim Kelly going head-to-head against Rory Sloane and Rory Laird in what is set to be a mouthwatering midfield match up.

Sloane and Laird will be keen to nullify the West Coasts aggressive blitz attacks coming from the centre bounce, with the Crows set to tag Tim Kelly to stop the Eagles from moving the ball forward quickly at pace.

With the disappointment of missing out on fourth place last season still fresh in the mind, Sunday’s match has some pretty significant ramifications for the Eagles. A win with a large points differential will propel them into the top four on the ladder, while a loss could see them fall out of the eight entirely.

Performing over the four quarters is their priority right now, and with experienced players coming back into the side this weekend, there’s no reason why the West Coast shouldn’t get the job done on Sunday. In mind