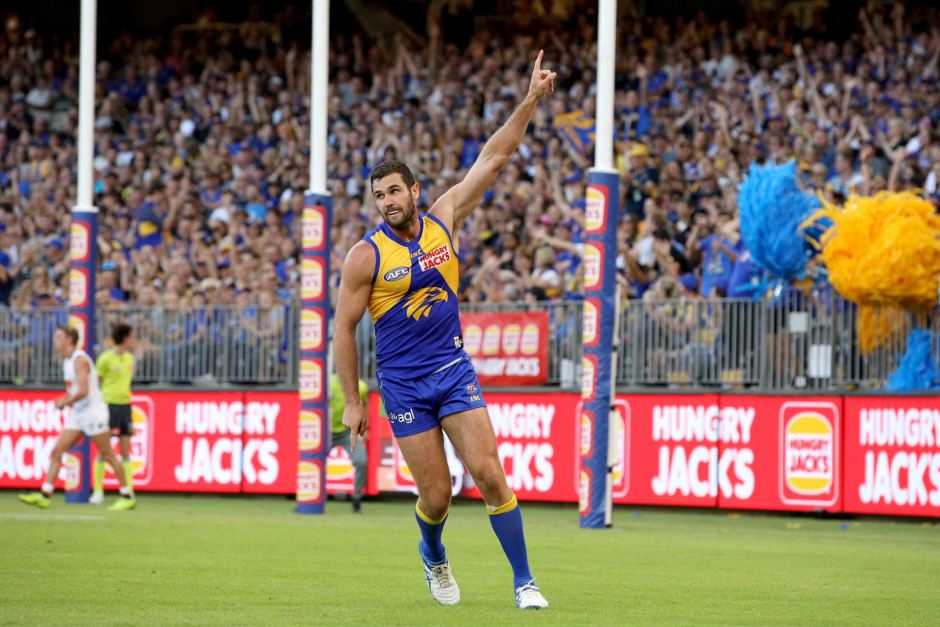 The West Coast’s tall forward line stood up to kick a flurry of goals to defeat the Adelaide Crows on Sunday afternoon.

The Eagles consolidated their spot inside the top eight, securing their third win on the bounce in front of a sell-out crowd at the Optus Stadium.

All-Australian forward Jack Darling set the tempo of the match, booting five goals in the second quarter to give the Eagles a 29 point lead at halftime.

The Eagles also welcomed back premiership defenders Jeremy McGovern and Tom Barrass from injury, allowing Oscar Allen to step back into full-forward to boot a hattrick of goals during the match.

The Crows battled hard and brought the intensity to the Eagles throughout the match, but it was the Eagles experience and tall forward line who outclassed the young Crows side to win 16.10 (106) to 11.10 (76).

“It was pretty hard-fought, they really had a crack, and it was a tough game, and eventually we held that four five-goal lead and got the job done,” Jack Darling said after the match.

“We’re getting a few players back. Hopefully, we keep playing four quarters of footy and get a few more wins before the mid-season bye.”

Welcome to nutmeg round!

Jack Darling thought he would spice up his fourth goal of the quarter with some party tricks 🎉#AFLEaglesCrows pic.twitter.com/ujR6dAqIY1

Holding the Eagles to a two-point lead going into quarter time, Rory Laird had Tim Kelly well contained for most of the opening term, while Adelaide’s Ben Keays linked up well with Shane McAdam and Billy Frampton inside the West Coast’s 50.

Adelaide matched the Eagles’ energy to win the line share of contested possessions, recording eleven more for the match. They also pressed harder inside the Eagles 50, making five more tackles and eight more inside 50s than the West Coast during the game.

Over the four quarters, the Eagles were not as consistent as head coach Adam Simpson would have liked. They showed some of their best footy during the first half but took their feet off the gas in the third term, gifting Adelaide a few easy goals. If it wasn’t for Adelaide’s poor accuracy in front of the sticks, the Crows could have easily changed the outcome of the match.

The Eagles got going in the second term of the match. After a cagey first term, with Adelaide doing well to shut the Eagles down at the stoppage, Tim Kelly cam out of the blocks firing, escaping Rory Laird’s hold to collect the ball at the centre bounce and find Josh Kennedy inside the 50, who kickstarted the Eagles second-quarter scoring streak.

Jack Darling followed suit and continued to mount his case for an All-Australian inclusion, taking a number of brilliant marks during the match, while slotting five goals during the second quarter.

Sat in fourth place in the Coleman Medal race, Darling has scored now racked up 27 goals for the season and today he scored one of his best goals yet. Taking a mark just off the goal square the premiership forward peculiarly opted to grubber the ball through Crows defender Brodie Smith’s legs, instead of kicking over the defender’s head to score the goal.

The score review showed the ball clearly nutmegged Smith, and gifted Darling his 26th goal of the season. He wasn’t done just yet though.

Despite putting on a marking masterclass throughout the match, Darling did drop an easy catch inside the 50. The fumble didn’t phase him though, and while under pressure from the advancing Adelaide defence he kept his cool to collect the football and snipe a huge snap through the sticks heading into halftime.

The Crows pressed harder on the Eagles in the second half, and forced the Eagles to concede several silly errors in the third term, gifting Shane McAdam and Harry Schoenberg a couple of easy goals.

Defensively, the Eagles played well tonight with young defender Alex Witherden stepping up to keep the Eagles noses in front in the final two terms. Witherden spearheaded the Eagles backline to hold off Adelaide’s advances putting in one of his best performances this year.

Taking 12 marks and 30 disposals, the former Brisbane half-back swung ten rebound 50s back at the Crows to keep them away from the Eagles danger zone.

Josh Kennedy, Jake Waterman, and Jamie Cripps all kicked majors to steady the ship late in the match, while Jamie Cripps had another standout performance, having a hand in 11 score involvements and 25 disposals.

Closing out the match, Tim Kelly and Andrew Gaff were once again brilliant in midfield, recording 31 and 30 disposals respectively for the West Coast, who will now join Geelong, Sydney, Brisbane, and Port Adelaide on 24 points at the top of the table.