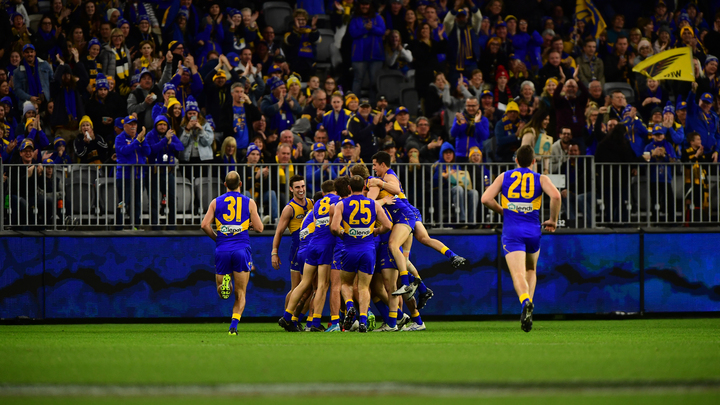 Four quarter performances are still a problem for the West Coast, who struggled against a spirited Crows side this weekend.

Since the Eagles humiliating loss to Geelong in round six, Adam Simpson has challenged his side to be more consistent over four quarters.

Although the West Coast have found some good form, having now won three games on the bounce, the Eagles were far from their best against Adelaide this weekend.

“Yeah, it probably wasn’t our cleanest game, but I thought the way that Adelaide played, you know, the ball intensity was there all day, ended well, and they had certain stages where they were on top,” Eagles Head Coach Adam Simpson said in his post-match press conference.

“We made the most of it through a bit of talent, a bit of system, we think we can play better than that, but we were quite impressed with what Adelaide brought today.”

Travelling to Perth for perhaps the toughest away fixture in the league, the Crows took the game to the Eagles, dominating the contested possession and inside 50 counts during the match while winning the final quarter 20 points to 15.

Despite the Crows coming into the game in the second half, the Eagles’ experience and tall forward line ultimately helped them close out the match.

But it was far from the four-quarter performance Adam Simpson has been looking for this season. Dips in momentum when the Eagles aren’t winning contested possessions have been their biggest problem this year, and that’s where Adelaide caused issues on Sunday.

“I think we’re still building with what we’re trying to achieve, obviously since Geelong, we had a pretty disappointing four quarters there, we’ve been consistent, and you know, today we’re really happy to get the win, don’t get me wrong.”

“But I think, too many basic skill errors, a couple of fumbles here and there, fundamentals.”

There were also issues with the Eagles composure in the latter stages of the match, affording the Crows several easy goals from avoidable mistakes.

Shane McAdam, in particular, took advantage of a poor lapse of judgement from the Eagles defence, gratefully taking an intercept mark to kick a brace of goals for the Crows.

The Eagles travel away to an aggressive GWS side next weekend, and if they are to come away with four points from the Sydney Showground, they’re going to need to be more clinical in their execution.

Although there were a few positives to reflect on in the second half, with Jamie Cripps growing into the game to record 25 disposals and 11 score involvements, while Jamaine Jones got his seventh goal of the season.

At the back, Alex Witherden had his best game in an Eagles jersey, rebounding ten times upfield to quell the Crows attacks. While Tim Kelly and Nic Naitanui were once again impressive, combining to provide the Eagles with a platform of attack in the middle of the park.

Naitanui had one of his outings and was superb around the ground today, making three tackles, four clearances, and 31 hit outs with 13 of those going to the advantage.

“I think our best was great today, but our worst looked quite vulnerable, so the last couple of weeks that’s been a bit more even, but as I said, Adelaide have got to take a lot of credit for that; they were really good.”

The Eagles now sit seventh in the table on 24 points tied with Geelong, Brisbane, Port Adelaide, and Sydney. With Richmond close behind on 20 points