Allen And McGovern Tests For Sunday; Ryan And Hurn Will Play 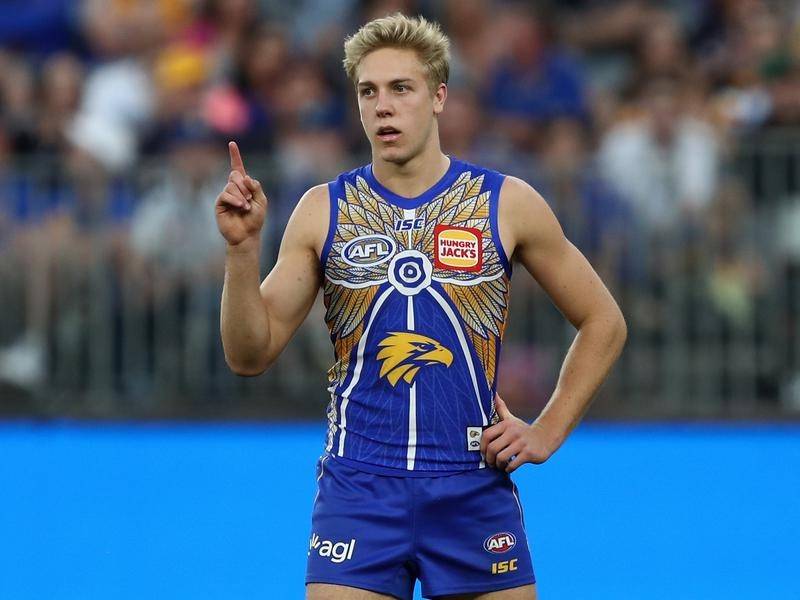 Oscar Allen and Jeremy McGovern both suffered injuries during the Eagles win against the Adelaide Crows on Sunday.

Meanwhile, Liam Ryan and Shannon Hurn will be fit to play and should feature on Sunday against GWS if they get through training this week.

Allen, who booted three goals at the weekend, was seen running laps and doing some light handling work with a medical brace around his arm at training earlier today after suffering an elbow ligament problem sustained in a charge down at the weekend.

Oscar Allen with a new look arm brace that has Eagles fans holding their breath, PLUS two stars push for selection against GWS.https://t.co/6JWQCqyimJ#AFL #Westcoasteagles pic.twitter.com/D3MWnkDtxL

“Oscar looked a little bit like Robocop out there, but it probably looks a lot worse than it is,” General Manager Craig Vozzo said.

“He had an elbow ligament problem as a result of a smother that he put on on the weekend, so our guys have adopted a conservative approach and are looking to give him maximum protection out there and allow the injury to heal.

“He’s tracking really well, and I expect he’ll get through training and be available to play.”

Putting his body on the line to track opposition players and smother kicks, Oscar Allen’s work rate around the ball has been phenomenal over the opening nine rounds of the season.

Likewise, Jeremy McGovern will also be hoping to play at the weekend, but his circumstances look a little more ominous.

Having missed rounds six and seven with a groin strain, the West Coast’s key defender seems to still be struggling with injury problems and was absent from this morning’s training session.

“Gov’ didn’t train today. He pulled up sore with one of his knees from a smother on the weekend.

“Light start to the week and see how he progresses through the week. Hopefully he can get through main training.”

There’s only one Liam Ryan 😂

Meanwhile, Shannon Hurn is set to finally beat Dean Cox’s appearance record and play his 291st game for the West Coast. If he features at the weekend, he’ll become the most capped player in the club’s history.

The Eagles medical staff have already signed off both players as fit to play next week, and provided they suffer no set backs in training, they’ll both be included in the 22 to play the Giants.

“We have good news with both Liam and Shannon. If they get through a normal training week, they’ve been ticked off by our medical and strength and conditioning staff to play this weekend, which is great news,” Craig Vozzo said.

“We’re expecting them both to be available.”

Ruckman Nathan Vardy could also make his return this weekend, after missing out on the last three weeks with a hot spot in his foot.

“Vards’ is progressing well. He’s done some more on-track work this week, and the pain has subsided significantly.

“Hopefully, he can get through main training and put his hand up for selection this week.”