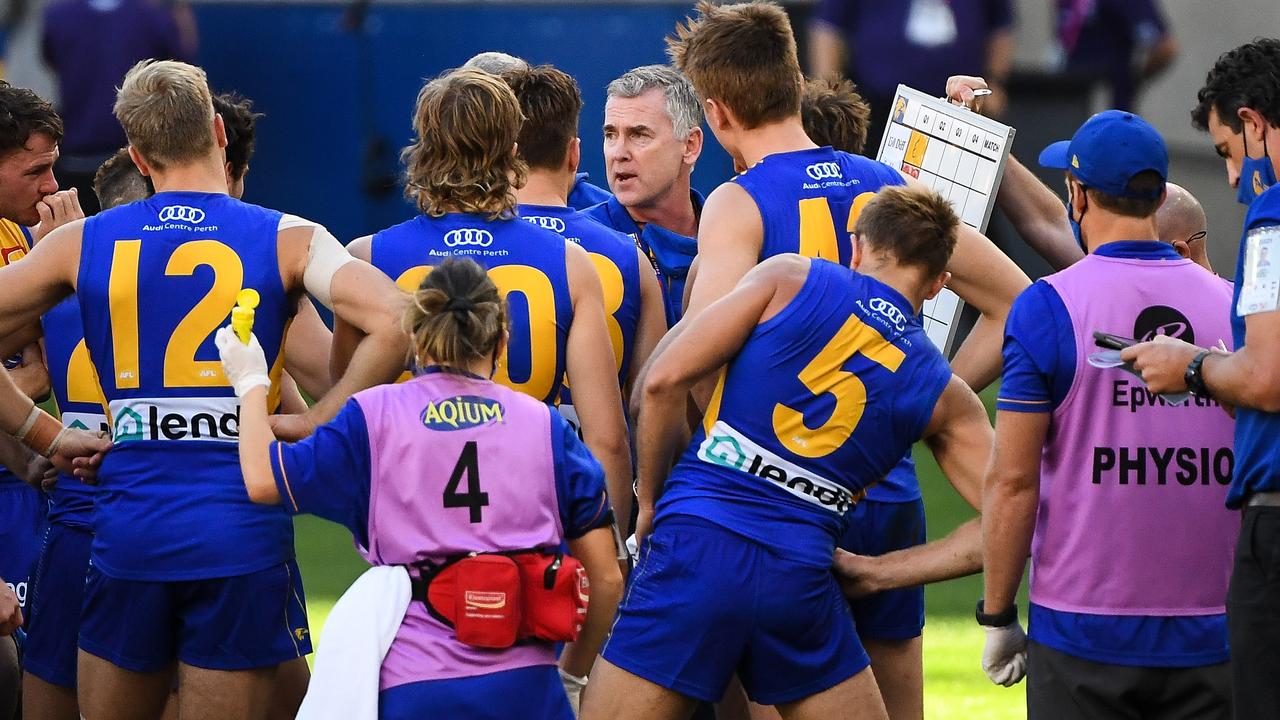 Eagles boss Adam Simpson believes this weekend’s match against GWS will provide the West Coast with a yardstick for the 2021 season.

Four weeks on from the West Coast’s humiliating 97-point loss to Geelong, Head Coach Adam Simpson has shined a light on how his team have turned their season around to go three wins on the bounce.

Going 6-3 for the start of the season, the Eagles are curiously in the same position as they were going into round ten in 2020.

All things considered, it’s not been a bad start to the season. Despite struggling away from home, the West Coast have played some brilliant football over the first nine rounds, recording two huge wins against Port Adelaide and Collingwood.

Admirably, the West Coast have shown a lot of character to climb back from that terrible loss to Geelong in round six, which many teams would struggle to pick themselves up after.

“I think we grounded ourselves pretty well,” Simpson said, referring to the week following the Eagles’ loss to Geelong. “A few decisions were made that week about how we were going to handle it.

“You can pivot in different directions when you have a significant loss like that, and I think our players have responded well, to the point that we’ve now won a few in a row.

Since then, they’ve secured their first away win of the season, defeated local rivals Fremantle, broken into the top eight, and have gone on a three-match winning streak, all with a growing list of injuries.

But as Simpson admitted, it’s not easy to get teams to initiate responses like that.

“We’ve all been part of big losses. In fact, I had a big one at Geelong as a player, and I think we went back to the club, put the gloves on, and punched the heck out of each other, which has an effect.

“But the issue is if you do that and don’t perform the next week, then that’s a problem.

“You have to be careful of how you get a better response, so we went through the vision like we normally do. We had a bit of time in the rooms and worked out why we lost from a physical point of view.

“Then we addressed a few things from our system, our role, some basics on the way we defend and in the end we were just honest and pragmatic on it all, which I think our players and everyone we talked to liked the honesty.

“We owned it, and we moved on. That’s pretty much what we did. And we did lose a few soldiers on the way, so we had to try to hone in on our roles as well.”

The Eagles have been one of the worst-hit teams in the competition for injuries this season, losing several A-graders during the start of the year, including Luke Shuey, Josh Kennedy, and Jeremy McGovern.

But they’ve managed these injuries well, with their younger players stepping up to play these roles over the past few weeks.

“We have some specific roles on our list and a system we try to play. We try to educate everyone on our list the same thing.

“So if we lose McGovern, Shuey, Hurn or Ryan, the player’s coming in may not have the same talent, but they know what they need to do in terms of executing the role.”

“On the weekend, I think we lent a little bit more on talent with Darling and Kennedy when it was backs against the wall for a little bit. But those guys stood up. You need a bit of talent, but you need systems as well.”

The West Coast’s class and experience around the field certainly helped them get the win against Adelaide this weekend, with Jack Darling once again putting forward his case for an All-Australian call-up kicking five goals in the second quarter.

Going forward, the Eagles can’t always rely on big-game players to get them out of tight situations. They need to be more clinical over four quarters and put in big performances both at home and on the road.

“I think we’re still working ourselves out and where we fit in the league at the minute,” Simpson said.

“I’ve got no doubt we’re capable of a little more consistency. The last three weeks have shown that we have a pretty good system that stands out well.

“We’ve beaten Port which was a really good win for us over here, and our challenge was always going to be; can we win on the road? Can we sustain our performances when we travel?”

This weekend the Eagles will travel away to a dangerous GWS side to see if they can rise to that challenge. With the Giants chasing a spot in the eight, Sunday’s match could be the Eagles toughest challenge yet and will act as a yardstick for how the West Coast can expect to play out the remainder of their season.

“This week, we’ll get a really good indication of where we’re at,” Simpson said.

“I know the Giants went down at the weekend to the tigers, but their form in the last three weeks has been exceptional and just looking at their midfield, they look really strong.”

A win at the weekend will keep the Eagles in the hunt for a place in the top four, but a loss could see them slip away from the pack of teams chasing a qualifying finals spot.