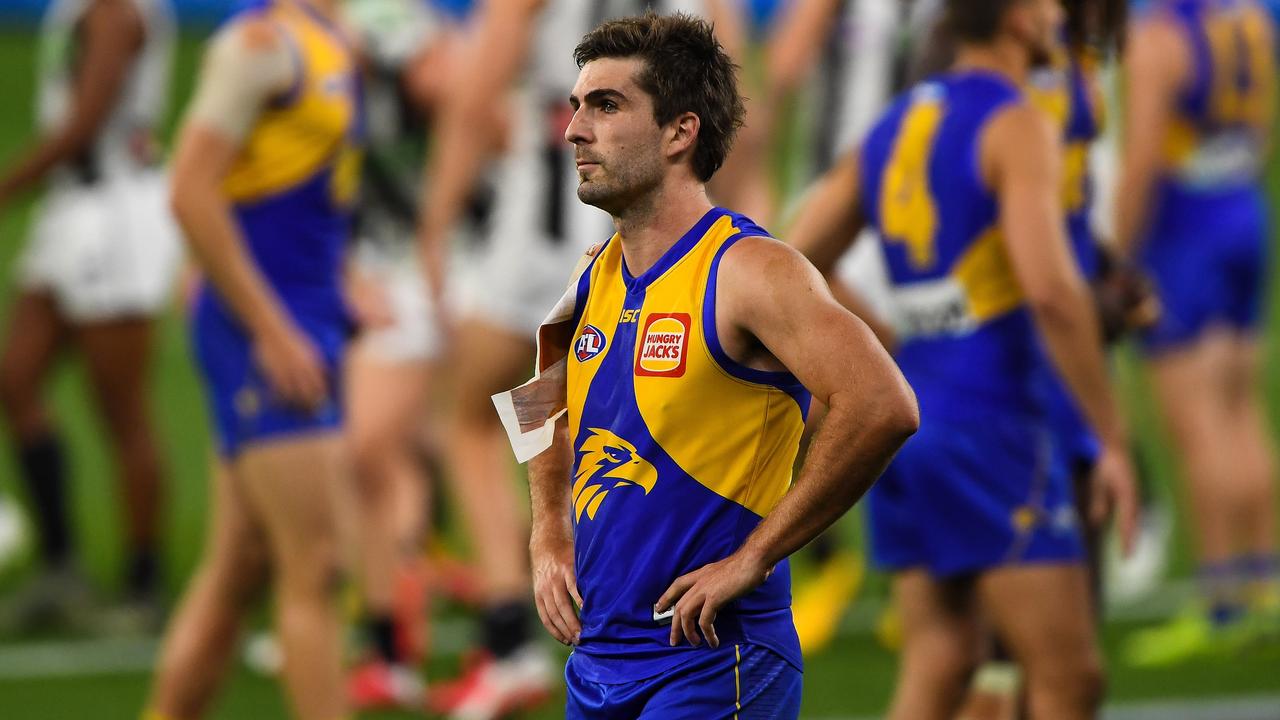 The Eagles’ form away from home has once again become a cause for concern.

Suffering a tough blow on the road against GWS on Sunday afternoon, the West Coast is now 1-4 for away wins at the start of the season.

Despite trading the lead fourteen times in the opening three quarters, the Giants’ intensity and high pressure allowed them to force turnovers in their forward half to win the match 13.15 (93) to 11.11 (77).

GWS will now jump Richmond to move into the top eight, four points behind the West Coast, who will rue a missed opportunity to break into the top four this weekend, particularly with Sydney dropping points against Fremantle on Saturday.

“We didn’t win on the road. That’s reality. It’s the fourth loss we have had on the road this season. We accept that. No excuses. We want to play a consistent, strong brand. We weren’t good enough today,” Eagles head coach Adam Simpson said in his post-match press conference.

“Sometimes you’ll concede more tackles, more uncontested possessions, but the style of play is the way you want it. We don’t want to have 30 less tackles.

“Efficiency of tackles is what we rate, and we’ve been poor at that. Their mids numbers looked healthy – probably healthier than ours – but I don’t want to blame our mids either.”

Showing lapses of composure while conceding multiple errors in compromising positions, the Eagles were outclassed by a physical and hard-working Giants midfield today.

The Giants dominated the clearance and contested possession count during the game, with their mids squeezing the Eagles back into their goal square, forcing them to concede fumbles and play several poor passes out from the back.

Daniel Lloyd, Josh Kelly, and Tim Taranto’s work rate was superb, shutting down the Eagles defenders to lead the tackle count, with each player recording eight tackles during the match.

Welcoming back Shannon Hurn and flying Liam Ryan back from injury, the West Coast got off to a fast start with Ryan immediately having an impact to give the Eagles the first blood.

Showing off his brilliance, Ryan polished off an excellent bit of build-up play to boot a perfectly weighted cross-field kick to speedster Jack Petruccelle, who converted to add to his already impressive 2021 goal tally.

Hasn’t taken Liam Ryan too long to get involved again 🔥

Once again, the West Coast’s tall forward line impressed with their aerial dominance over the young GWS defence. Oscar Allen, Jack Darling, Josh Kennedy, and Jamie Cripps all combined well throughout the match to take multiple hanging marks inside 50, with each getting on the scoresheet during the match.

The West Coast were clinical when they got the ball up to their forwards, with their inside 50 efficiency being far superior to that of the Giants. But GWS outclassed them with their service into the arc, kicking more inside 50s during the match, allowing them to put greater pressure on the West Coast backline.

After a cagey first quarter, the game started to open up, with both teams going goal for goal in the second term.

Jack Redden got the Eagles off to a fast start, taking a fumble off a pack mark to score his first goal of the season. But his score was quickly nullified by young forward Matt Flynn, who converted another set shot after marking a long ball coming in from the centre square.

Josh Kennedy followed up with the Eagles’ next major, but the Giants found a lucky break, with Jeremy Finlayson’s kick to the goal square taking a miraculous bounce, turning back on itself, and trickling through the posts for six points.

We were also treated to a titanic clash at the centre bounce with Nic Naitanui and Shane Mumford going head to head at the ruck. Naitanui won the majority of hitouts, recording 34 for the match. But Mumford’s strength and pressure on Naitanui ensured the All-Australian ruckman could only fire eight of those hitouts towards the Eagles’ advantage, stunting the West Coast’s advances upfield.

HAVE YOU EVER SEEN THE BALL BOUNCE LIKE THIS 🤯

Youngsters Tom Green and Bailey Williams continued the scoring on either side to keep the differential at seven points in the Giants’ favour, but Jamie Cripps stepped up to give the Eagles a lift ahead of halftime, kicking a huge goal to bring the West Coast within one point of their opposition at the break.

Despite goals from Tim Kelly and Jack Petruccelle coming early in the second half, the Eagles started to lose control of the match, and the Giants depth in midfield shone through. Jacob Hopper, Callan Ward, Lachie Whitfield, and Tim Taranto swarmed the contest and dominated the Eagles’ across the centre of the park.

Lachie Whitfield was the Giant’s best afield, recording 29 disposals and ten marks, one of which was totally uncontested inside the goal square, which Whitfield took great pleasure in collecting and snapping through to give GWS an eleven point lead during the middle of the third term.

Jamie Cripps shows his class before the break 👏#AFLGiantsEagles pic.twitter.com/IyRQSUdf2U

Another goal from Jamie Cripps at the end of the third term gave the West Coast some momentum coming into the final quarter, but the Eagles soon started to fatigue and could not wrestle the lead off GWS, who held out in a frantic final quarter.

“It was a good battle. It felt almost like a final with the ebbs and flows,” Adam Simpson said after the match.

“We had our opportunities. Then they took their opportunities late. But overall, I think the numbers would suggest that they were a better side.

“Proud of the fact that we played with plenty of spirit and energy and hung in there, but I think overall they probably played the better footy.”