Injury Woes Continue For McGovern; Yeo Back This Weekend? 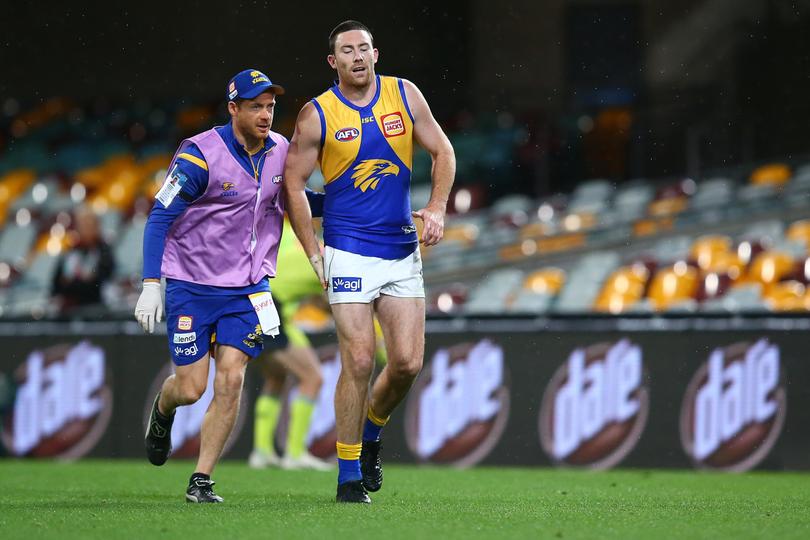 Champion defender Jeremy McGovern is likely to spend an extended period on the sidelines after suffering a knee injury against the Crows in round nine.

The All-Australian full-back was smothering a kick when the injury occurred in the Eagles’ round nine win against the Adelaide Crows.

While the West Coast initially seemed optimistic about his injury lay-off, doctors have now advised he could be out of action for up to four weeks.

“Jeremy, he’s going to be out with that knee for probably a four-week period is what the doctors are anticipating at this stage,” Eagles General Manager Craig Vozzo told the club website on Tuesday afternoon.

McGovern has already missed three games this season with a groin injury, but remarkably is still ranked inside the AFL’s top 20 for intercept marks per game. He’ll be a big loss for the Eagles over the coming weeks but is likely to make a return after the mid-season bye.

“Unfortunately, it will be a post-bye thing, which is disappointing for the club and for Jeremy,” Vozzo said.

“But at least it’s not a long-term thing, and we look forward to welcoming him back hopefully close to after the bye.”

There’s even more bad news for the Eagles defensive lines, who will be a bit lighter on their feet over the next month, as rebounding half-back Alex Witherden will also be sidelined with a groin injury.

Witherden pulled up during last week’s Captain’s Run and was replaced at short notice by Jackson Nelson for the game against GWS.

“Alex pulled up really sore after our Captain’s Run, so it was quite a surprise. He’s had a little bit of symptom beforehand in the area,” Vozzo said.

“They’ve done some scans and are working out exactly what it is at the moment – hopefully, it’s not the dreaded ‘OP’ phrase.

“He won’t be available this week. We’re going to take a conservative approach over the next week or so and then finalise where we get to after that.”

Speaking of the dreaded ‘OP’ phrase, Eagles midfielder Elliot Yeo seems to have pulled up well after playing his first game in over nine months for the West Coast WAFL side on Saturday.

Yeo, who is now coming through the back end of a nasty osteo pubis injury, looked back to his old self, amassing 13 disposals while showing off his power and elite work rate to win ground balls at the stoppage.

“Elliot was on limited minutes, I think he played just over 70 minutes in the end, got up the volumes our guys were wanting.“

“The reports were he came up well from the game. We’ll see how he progresses through the week, I don’t want to get too excited.”

Although, it looks like the Eagles are taking a cautious approach with their star midfielder, who could have a chance of starting this weekend against Essendon.

“He pulled up pretty well, as expected, so we’ll have to wait and see over the next couple of days how he trains and how he feels,” Adam Simpson told 6PR this week.

“It’s been part of the plan to be really slow with his return to play, so we knew this decision this week was coming, so we’ll see how he travels throughout the week and make a call later in the week.”

Mark Hutchings also played in the WAFL this weekend, recording an impressive 28 disposals for the match, and like Yeo, will continue to build up more minutes until he is ready to rejoin the senior side.

Brad Sheppard will also be a late test this week after suffering a minor ankle sprain in last Sunday’s loss to GWS. The All-Australian forward looked to be in some discomfort after rolling his ankle in a marking contest, but it seems likely he’ll be available for selection this weekend.

“He’s pulled up OK. The reports from the doctors were positive. It’s just a plain vanilla-type sprain,” Vozzo said.

“He’ll have a slow start to the week, and he’ll be a decision pending how he performs during the week and at main training.”