West Coast Eagles > News > Analysis > Are The West Coast In Danger Of Not Fulfilling Their Premiership Potential?

Are The West Coast In Danger Of Not Fulfilling Their Premiership Potential? 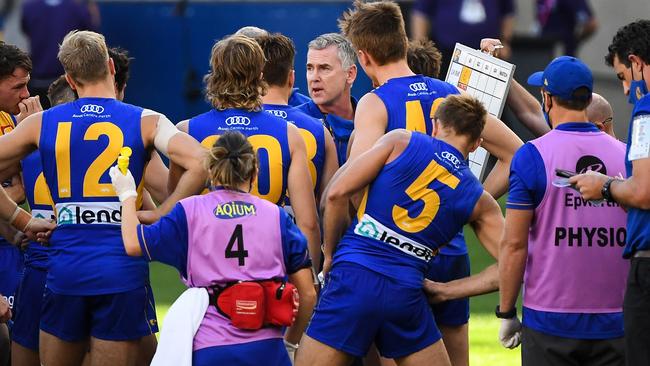 Low-pressure differentials, poor performances on the road, and a mounting injury list – are the West Coast’s flag credentials in danger?

This weekend’s loss to GWS further asserted that the Eagles have issues when playing away from home.

Falling short of their mark at the weekend, the Eagles were defeated across all four quarters by a physical but beatable Giants side.

That’s no discredit to the Giants, who were by far the better team on Sunday, with their midfield outclassing the Eagles with the ball in hand.

Frustratingly for the West Coast, they were never more than two scores off the lead and were only three points adrift going into the last five minutes of the match. But it was their lack of pressure on the football that let them down on Sunday.

Unfortunately, this has become an all too familiar occurrence for the West Coast, who have struggled to apply pressure on teams this year, going 1-4 away from home over the first ten rounds.

Their poor away form has left a big question mark over whether the Eagles will be a premiership contender come September.

Speaking on Fox Footy’s First Crack, former St Kilda defender Leigh Montagna concurred that “there are some red flags with where the West Coast are at.”

“I still think they will make the top eight, but as the weeks go on, we’ve got to ask questions of the West Coast Eagles premiership credentials.

“Calling the game today, they were well and truly beaten by the Giants. The Giants played the best across the game, and I think Adam Simpson even declared that, but when you start to dig deeper at the West Coast Eagles, they are 6-4.“

“Their wins have been against teams that are 10th, 13th, 15th, 16th and 17th. Their good win was against Port Adelaide; we give them credit for that. Their four losses have been to Geelong, St Kilda, Western Bulldogs and the Giants.

“And they’ve only won four quarters against those teams in the top eight.”

A common theme of Adam Simpson’s press conferences this season have been his criticisms of the West Coast’s lack of consistency and pressure on the ball over four quarters of football. Winning just four quarters against three teams in the top eight is not the standard of a premiership-winning side.

The issue is that this is happening all too often for the West Coast and is a cause for concern if the Eagles hope to crack the top four this season.

“When we’ve lost games of football, those have generally been the things that have popped up.”

“At some point, you’ve probably got to accept that that criticism is probably warranted because those are the things that we’ve been falling down on, and they’ve cost us games of footy.”

Applying pressure has been the Eagles biggest issue across each of their losses at the start of the year, particularly in their defeat away to GWS on Sunday.

That’s Round 10 done folks and here is how the AFL ladder looks!

Tag a mate whose team is sitting below yours 😉👇 pic.twitter.com/rR6GM53s6D

The Giants had 30 more tackles than the West Coast and occupied more territory in their forward half, squeezing the Eagles defenders back to their goal square while forcing them to make poor decisions and concede mistakes inside their 50.

Again, this isn’t just a one-off; the West Coast’s pressure differential has been one of the worst so far in the competition. The Eagles are currently ranked 18th for tackles per game, 16th for inside 50s per game, and 12th for least opponent disposals per game.

Let’s not deny the fact that there are some hard workers in the Eagles ranks, with Jamie Cripps, Tim Kelly, and Jack Redden being some of the sides biggest tacklers up and down the field.

Yet, as a team, the Eagles are struggling to put in tackles and press higher upfield.

Unfortunately for the West Coast, games are decided on a team’s ability to control field position and turn the ball over higher upfield. There is a positive correlation between the number of contested possessions accrued per game, and a team’s standing in the league, with Melbourne, Brisbane, and the Western Bulldogs all occupying places inside the top four, while topping the charts rankings for the most contested possessions won per game.

Despite being the best in the league when it comes to their efficiency inside 50, the West Coast have been poor at the contest this season, ranking 14th in the league for average contested possessions per match.

If the Eagles can start to win more contested possessions and control the play in their forward half, they can take the pressure off their defence, who have struggled to contain opposition attacks.

“Even when they won the premiership in 2018, they were ranked only 12th for tackles, not 18th,” Montagna affirmed, noting that the Eagles defence are currently the second-worst in the league for goals conceded per entry inside their defensive 50.

“It’s affecting their ability to defend, they are being scored against a lot easier than this West Coast Eagles team used to be.”

“You don’t have to be the best team with pressure… but they’ve got to be much, much better than 18th.”

The Eagles will play Essendon and Carlton before the mid-season bye, after which they will face their toughest run yet against Richmond, the Western Bulldogs, and Sydney.

With key midfielders Luke Shuey and Elliot Yeo returning from injury over the next few weeks, there’s no doubt the West Coast will be able to improve performances.

But if they are to fulfil their potential and make the most of their current premiership window, they must consistently apply more pressure on opposition teams across four quarters, while playing away from home.