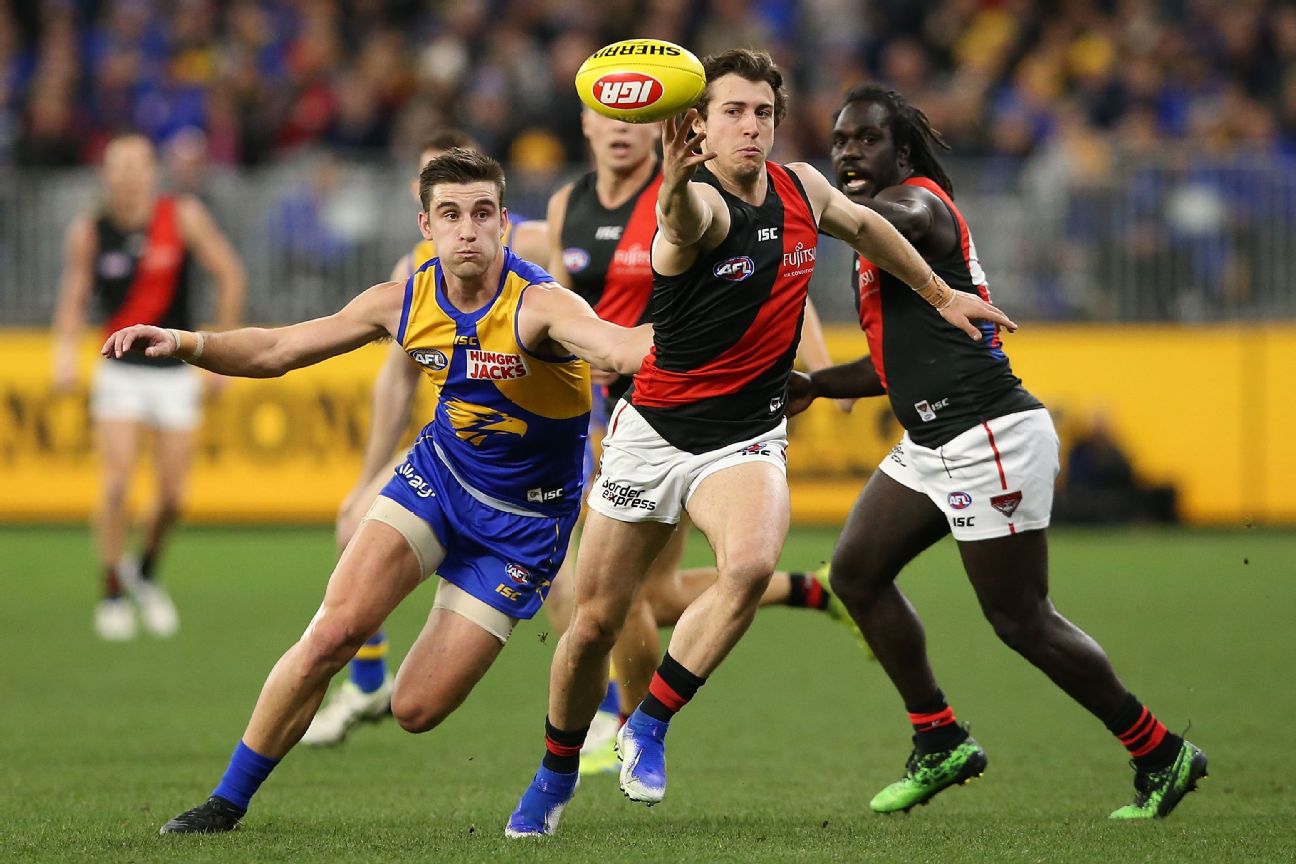 West Coast star midfielder Elliot Yeo will make his long-awaited return from injury, while Essendon forward Jake Stringer will also start for the Bombers this weekend.

Having not played since round 11 of last year, Adam Simpson has announced “it’s time to play” for Eagles’ All-Australian midfielder Elliot Yeo.

The two-time John Worlsford medalist had a successful hit out in the WAFL last weekend, playing his first match in nine months.

Having recovered from an ongoing Osteo Pubis injury, the powerful midfielder played 70 minutes for the Eagles WAFL side last week and has been included in the starting 18 for this weekend’s Indigenous Round clash against Essendon.

“We’ve been really conservative with his (Yeo’s) rebuild. We’ve taken extra time, and now he gets a chance to play,” Simpson told reporters earlier today.

“Expectations are he’ll work into the season. I wouldn’t be expecting his best version tomorrow, but hopefully, he can build towards it.”

Essendon will also welcome back prolific goalkicker Jake Stringer for the match. The former premiership player missed out on the last two rounds with a hamstring injury but travelled with the squad to Perth earlier this week.

Unfortunately, it’s been a pretty turbulent seven days for the Bombers who made a snap call to leave Victoria last Wednesday amid fears of state border closures following a rise in coronavirus cases in Melbourne.

Although head coach Brett Rutten confirmed that events taking place off-field are nothing out of the ordinary for the bombers, who will be focused on securing their first away win of the season on Saturday.

“We were based outside of Victoria a fair bit last year and obviously going into this year, we knew there were going to be some times where there was a potential that this might happen, but the guys are all pretty flexible and taking it in their stride,” Rutten told reporters on Thursday afternoon.

Going 0-4 away from home, the Bombers’ away form has left a lot to be desired, but they have still posed a real threat to teams on the road this year. Despite heavy losses to Port Adelaide and Brisbane, Essendon were unlucky not to come away with wins in both their trips to Syndey, succumbing to late goals against the Swans and GWS in rounds four and eight.

This weekend, the incentives are there for Essendon, who can tie level with GWS sitting eighth in the ladder, making them an even more dangerous opponent for the Eagles this Saturday.

“They’ve got confidence, talent, youth, speed, and are number two for scoring.”

“The youth is there, but it’s the middle tier and the young players that are turning into leaders; the Parish-types they’re the danger for us.”

The West Coast will come up against another tough battle in midfield against Bombers trio Zach Merrett, Darcy Parish, and Dyson Heppell.

23-year-old onballer Parish has been the best and most creative player for the Bombers this season, averaging 29.2 disposals per match, and is currently ranked 8th in the League for goal assists and turnovers.

His pressure on the ball around the stoppage is one of the best in the League, and there’s no doubt the Eagles will be using Tim Kelly to tag Parish, particularly with the Bombers’ onballer being ranked third for clearances in the AFL this year.

“The best version of their side is really dangerous, so we’re fully aware of what is in front of us coming off a scratchy game on the weekend.”

As for the West Coast, Adam Simpson has declared his side have “a lot of work to do” following their tough loss on the road to GWS last weekend.

The Eagles were outclassed by a powerful Giants side over all four quarters and will be looking to bounce back with a win to put pressure on teams in the top four.

Essendon will bring the same intensity in midfield as the Giants did last weekend, and the West Coast will need to counter that, pressing higher upfield and shutting down the Bombers attacks at their source by improving their tackle count from last weekend.

But with Elliot Yeo back in the side this weekend, we’re expecting a little more depth in midfield that should help the Eagles win more contested possessions higher up the field and get the ball into their tall forward line faster.

All-time leading goalkicker Josh Kennedy has a very good record scoring against Essendon, averaging 3.3 goals in each game he’s played against the Bombers and will be looking to nab a few this weekend in his bid to catch up with strike partner Jack Darling, who leads the Eagles golden boot race with 27 goals.

Although the West Coast’s home record speaks for itself, having not conceded a game at the Optus since August 2019, they certainly won’t have it all their own way on Saturday, especially as they’ll be without All-Australian defender Jeremy McGovern.

Considering Essendon’s 59% goal accuracy, which is the best in the AFL this year, the Eagles will need to keep things tight at the back, with Josh Rotham set to link up with Tom Barrass in the key defender roles on Saturday.

It’s set to be one of the best ties of round eleven, so don’t miss out; pick a up your tickets here!