Round 12 Preview: Eagles Facing New Injury Catastrophy Ahead Of Trip To Sydney 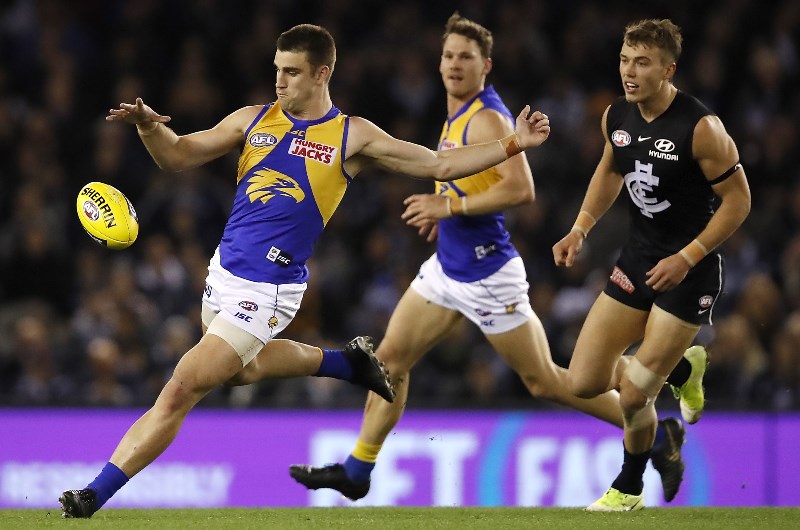 The West Coast will field a refreshed side against Carlton this weekend after sustaining five injuries during their round 11 loss to the Bombers.

Eagles head coach Adam Simpson is still confident the West Coast have enough talent in their squad to beat Carlton on Sunday, despite having lost several A-graders to injury.

2020 draftee’s Luke Edwards and Zane Trew will both make their AFL debuts on Sunday, and they’ll be joined at the centre bounce by developing onballer Xavier O’Neill who will come in to replace injured midfielder Tim Kelly.

Young defender Harry Edwards will move into the full-back position in place of Jeremy McGovern. While Jake Waterman, who came on to score two goals as an injury substitution last weekend, will start in the half-forward line in place of champion goalkicker Josh Kennedy.

The news gets worse for the Eagles, who will also be without Oscar Allen, Jarrod Brander, and Brendon Ah Chee, who all suffered injuries against the Bombers last Saturday.

“I’m assuming there’s injuries across the competition, but we seem to have copped the pretty important players,” Adam Simpson told the club website earlier this week.

“It’s hard to play your best with six, seven or eight of your top 10 missing, but at the same time, we’ve had some great wins with perhaps not our ‘best’ side.”

“We’re still confident we’ve got the cattle, but it will just look a bit different.”

Even in the absence of key players, the West Coast have managed to hold their own against tough opposition this season, but there’s no doubt these injuries have come at a tough time for the West Coast.

With the top four slowly starting to slip out of reach, there is a big red flag over the Eagles title credentials this season.

Mathematically, they will need to win at least 9 of their next 12 fixtures to keep their hopes of breaking the top four alive, and with a tough run of fixtures ahead, the West Coast must secure a win against an underperforming Carlton side on Sunday.

“But opportunity is great for youth to come through. I think our members and fans love it when we debut players.”

An injection of youth and exuberance might not be a bad thing for the Eagles, who have fallen into a bad habit of fading out of games, having won only three final quarters across the opening 11 rounds of the season.

Their performance against Essendon last week again showed that the West Coast are still suffering from a lack of consistency when closing out matches.

The Bombers ramped up the pressure in the fourth term to record 35 more disposals, 25 more marks, and 12 more inside 50s than the West Coast, who disappointingly faded out of the match.

“We’re not being consistent in our four-quarter effort, which has been a big thing this year, and we try to focus on it, and I know we’re narrowing in on the last quarter, but we haven’t been consistent in that area,” Eagles forward Josh Kennedy told Radio 6PR earlier this week.

“They (Essendon) were tougher for longer. We had a good first half, and that last half, we lost a fair bit of contested ball, especially in that last quarter.

“They were able to move the ball forward and keep it in their forward half. I think they had about 16 inside 50s in that last quarter, and we only had a few, so that makes a huge difference when you’re trying to gain field position and kick a score.

“They were able to dominate and obviously get the four points.”

This weekend the Eagles will come up against a 13th placed Carlton side, who are also having issues sustaining momentum throughout four quarters of footy.

Carlton also have one of the worst final quarter points differentials in the league, sitting 17th for points conceded in the last 20 minutes. But when it comes to applying pressure and winning the ball back, Carlton are even worse, ranking 18th for their tackle efficiency.

Let’s not discredit the Blues. With the ball in hand, they are one of the most dangerous sides in the league, particularly when they have Patrick Cripps, Sam Walsh, and Eddie Betts in the side.

Their shooting efficiency from 40 meters is also one of the best in the competition, with goal machine Harry McKay currently leading this year’s Coleman medal race with 38 goals.

Like the Eagles, Carlton are guilty of being unable to sustain periods of dominance throughout games this season. Having not won a match against a top-eight team in 2021, with their record standing at 4-7 over the opening 11 rounds the year, it’s been a hugely underwhelming season for a Carlton side who should be much higher up the ladder.

With both sides suffering from lapses in momentum during the season, Sunday’s match at the SCG will come down to who wants it more.