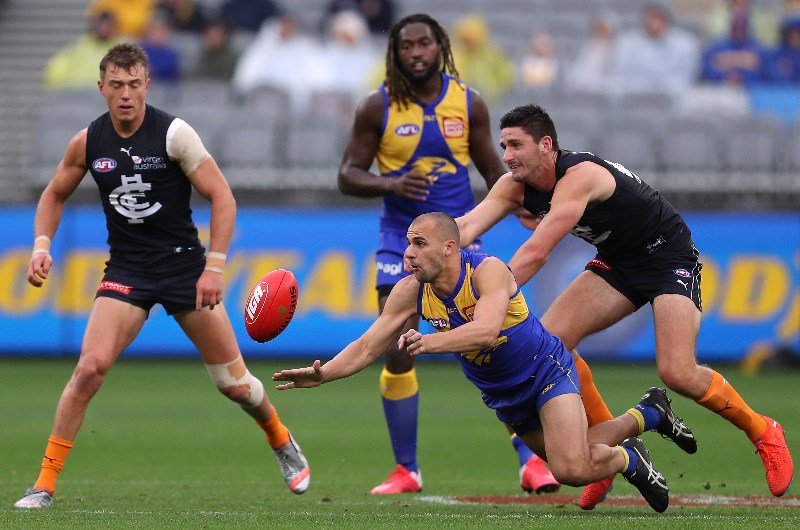 The West Coast defeated Carlton by 22 points at the Sydney Cricket Ground on Sunday Afternoon.

Excitement machine Liam Ryan starred as the Eagles convincingly blasted past a waning Carlton side who will slip into 14th place at the turn of the season.

Ryan booted four goals, having recently recovered from a four-week injury lay-off, and was up to his usual tricks, going aerial to put forward yet another mark of the year contender, sitting on defender Liam Stocker’s head.

Five of the Eagles starting lineup weren’t born when they last won at the SCG in 1999, but it was their young guns who stood up in the absence of key players, with 19-year-old winger, Luke Edwards, kicking a goal on debut.

The win was soured with more injury problems arising for the West Coast. Champion defender Brad Sheppard left the field in the opening quarter, suffering a nasty concussion in a miss-timed tackle on Carlton’s Adam Saad.

Carlton also suffered a huge blow early on with the League’s leading goalkicker Harry McKay leaving the pitch with a concussion.

For the Eagles, it was a performance that was much more synonymous with what Adam Simpson has been striving for over the past few months. The Eagles high pressure, work rate off the ball, and composure while in possession helped them dominate field position while winning, winning all of the clearance, contested possession, and inside 50 counts for the match.

Coming out of the blocks firing, Jack Darling and Liam Ryan both got the West Coast’s scoreboard ticking, capitalising on some smooth counter-attacking play against Carlton’s powerful midfield.

Uncharacteristically, Carlton’s accuracy in front of goal was poor. David Teague’s side recorded a 43% shot accuracy for the match, and Harry McKay, Zac Fisher, and Will Setterfield all failing to convert from set shots in the opening term.

Being guilty of dropping their heads and letting teams get the run on them this season, the Eagles notably didn’t fade off after Carlton scored. Instead, key players Andrew Gaff and Liam Ryan pushed harder up the field to pump multiple bombs towards Ryan, who made no wastage of the chances provided.

Gaff opened the scoring for the Eagles in the second quarter, thanks to some brilliant groundwork from Nic Naitanui, smothering a clearance and palming off to the Eagles midfielder, who struck home for his second goal of the season.

Naitanui had another excellent performance, booting seven stoppage clearances, five inside 50s, while dominating De Koning and Matt Pittonet at the stoppage to give the West Coast valuable field position inside the 50.

Despite this being one of the Eagles best performances this season, Adam Simpson’s side weren’t the finished article today. Defensively the Eagles were slow to control Carlton on the break and allowed Eddie Betts, Jack Silvagni, and Adam Saad far too much space on the ball. That allowed the Blues to shoot two quick goals through Matt Owies late in the second term.

But the momentum wasn’t out of the Eagles hands for too long. Medical substitute Jamaine Jones responded for the Eagles, gambling under a long bomb forward from Luke Edwards to kick a brace that pulled the West Coast in front by eight points at the half.

And although Jones deserves credit for his impact in the game, Xavier O’Neill and debutant Luke Edwards’ work to recover the ball and pump it into the arc should equally be recognised.

Carlton started the better in the second half. Running through tackles, Sam Walsh and Sam Doherty pressed forwards to find Matt Cottrell inside the 50, who pulled the Blues back within two points.

Andrew Gaff and Liam Ryan continued to cause problems for Carlton inside the 50, this time linking up on the Carlton goal line to respond. Gun forward Zac Langdon followed up with some brilliant footwork, adding to the scoreboard and easing the Eagles into control of the match.

Despite two more goals coming from Eddie Betts and Zac Williams, the West Coast were simply too good for Carlton and turned the ball over higher upfield, pushing Carlton back into their goal square.

Worryingly Betts grabbed another goal at the start of the final 20, and it looked as though the Eagles would fall into their old habit of dropping off in the last quarter. But they held fast and professionally closed out the game keeping Carlton to only one goal in the final term.

Xavier O’Neill and Jamie Cripps were rewarded for their hard work with a goal apiece in the final 20, while more injury concerns were raised over Liam Ryan, who looked as though he’d pulled his hammy towards the end of the game.

The win will keep the Eagles level with Richmond inside the top eight on 28 points and will give them a lot of confidence going into next weekend’s re-arranged fixture against the Tigers, who are on a roll after defeating rivals Essendon in the Dreamtime fixture on Saturday night.