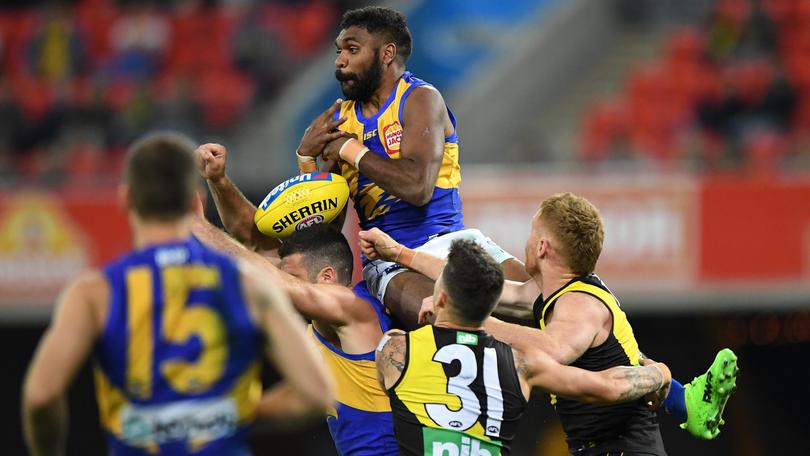 Josh Kennedy and Oscar Allen will start for the Eagles against Richmond this Sunday in a match that could make or break the Eagle’s season.

Pivotal is a word we don’t often use to describe footy matches, but Sunday’s eight-point blockbuster between the West Coast and Richmond will have an extra edge.

Struggling with momentum this season, both sides sit at the bottom of the top eight tied on 28 points, having gone 7-5 heading into round 13.

The ladder as it stands after round 12 ✅ pic.twitter.com/saHl5kp8y5

Their lowly position in the top eight reflects both sides underwhelming starts to the 2021 season, with neither managing to fulfil their top-four potential, succumbing to injuries to key players while and throwing away winnable matches.

We can’t rule either team out from a qualifying finals position just yet, although making the top four will be a tall order.

A win on Sunday would bring the winner level with Sydney, Port Adelaide, and Brisbane, all currently tied in fourth place on 32 points and would keep the winner’s hopes of securing fourth place alive but only by a very thin thread.

For the loser, an elimination finals place is almost guaranteed, but they’ll have to fend off the advances of GWS, Essendon, and Fremantle to hang onto that coveted eighth place.

“I think there’s a real battle for the top eight, and we’re right at the bottom of it. This week is critical for that part of the season,” Eagles head coach Adam Simpson said in a press conference on Thursday.

“We’re on the same wins. So it’s a massive game for both of us. It’s a chance to consolidate up the ladder a little bit.

“We really need to play our way; we need to get the game on our terms as much as we can.”

Like the Eagles, Richmond have struggled to perform over four quarters. They’ve drifted out of games this season, and while they’ve pulled off some pretty miraculous comebacks, they’ve been well beaten at times too.

Despite coming close against Port Adelaide and Melbourne, the Tigers suffered heavy blows against Sydney, Geelong, and Brisbane most recently in round ten.

Their loss to the Lions was perhaps the worst of the lot, and despite getting a fast start on Brisbane, going three goals up in the opening five minutes, Brisbane grew into the match and stopped Richmond from playing the ball inside the Lions’ defensive half.

Pressing higher upfield while turning the ball over in the forward 50, Brisbane played the Tigers at their own game and stopped Richmond from getting field position, where the likes of Dustin Martin, Dion Prestia, and Jason Castagna would usually turn the ball over.

The Tigers love to play high-pressure footy and win turnovers upfield, scoring 101 points from intercept possessions against Essendon last week, with the mercurial Shai Bolton shining in the Tigers forward line. And when they win the ball inside 50, it’s game over.

Shai Bolton provided us a Dreamtime in Perth highlight to remember as he earned the round 12 @rebelsport Goal of the Year nomination!

To vote next week, head to google and search ‘afl vote’. pic.twitter.com/DsLLiTnJtQ

If the Eagles are to win on Sunday, they’ll need to copy the Lions and push higher up the field and shut down spearhead midfielder Dustin Martin, who is the best in the league for turnovers won and is also third for forward 50 groundball gets.

But there is good and bad team news for the Tigers.

Key onballer Dion Prestia will miss out on Sunday’s match after suffering a hamstring strain against Essendon last week. In his place, they’ll welcome back three-time premiership player Kane Lambert, who will come in as a straight swap to that specialist ground ball unit. Like Martin, Lambert is an out-and-old ball winner and will be another player the Eagles will need to track.

When it comes to applying pressure, Adam Simpson’s side have been one of the worst teams in the league. Sunday’s win over Carlton was perhaps the first time this year the Eagles have shown they can keep a team under the pump for a full four quarters.

And when they get their possession systems going higher up the field, the Eagles become one of the most difficult teams to play against, as they showed on Sunday.

There’s no doubt Yeo could be used to tag Martin on Sunday, but it’s more likely Simpson will instruct him to follow the play and turn the ball over in midfield. That’ll help the Eagles launch more scores from outside the Tigers 50, and utilise their rucking advantage with Nic Naitanui at the stoppage, to provide top service to their rejuvenated forward line.

And while the Tigers will be without key ruckman Toby Nankervis and goalkicker Tom Lynch on Sunday, the West Coast will be strengthened by the return of tall forwards Oscar Allen and Josh Kennedy, while Liam Duggan will return to the Eagles’ half-back line.

With Allen and Kennedy coming back from injury to spearhead the Eagles attack alongside last week’s man of the match Liam Ryan and champion forward Jack Darling, we’re set for a colossal battle up top, with the Eagles forwards squaring off against experienced Richmond defenders Noah Balta, Dylan Grimes, and Nathan Broad.

Lord only knows what the hangover from three premiership titles must be like, but one thing’s for sure, you can never rule out Richmond. Damien Hardwick’s side know how to step up in big games, even after their slow start to the season.

That makes them a dangerous side coming into this pivotal match, yet they’ll have to undo a high in confidence West Coast side playing at their home fortress this weekend.

This match could swing either way, but with their key forwards back in action, it’s the Eagles who are better placed to take four points this weekend.