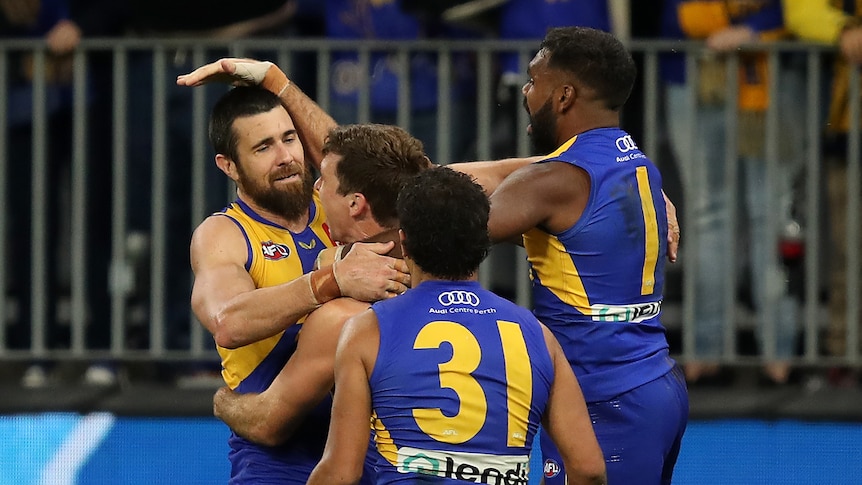 Two-time Coleman Medalist Josh Kennedy kicked the winner for the Eagles after Adam Simpson’s side came from behind to defeat the reigning premiers.

Reminiscent of Dom Sheed’s Grand Final winning goal in 2018, Eagles champion goalkicker Josh Kennedy stepped up to deliver one of the greatest moments in AFL history.

Signing off on an incredible personal performance, Kennedy took a diving mark from small-forward Liam Ryan with a minute to go on the clock. Stepping up to the occasion, Kennedy booted a huge banana kick from an impossible angle to win the match for the West Coast in dramatic circumstances.

In a game that had everything from big momentum shifts to big marks, it was the Eagles big-name players, Josh Kennedy, Dom Sheed, Nic Naitanui, and Tom Barrass, who stood up to keep the pressure on the Tigers throughout the match.

Richmond were prolific with the ball in hand and took their opportunities when they advanced into the Eagles defensive half.

And although they booted four consecutive goals before halftime, it was the West Coast’s resilience and added pressure on the ball that won them the match.

With Tall forwards Josh Kennedy and Oscar Allen back in the side this week, the West Coast looked to pump long balls into the Tigers 50 from the start but were blocked out by the Tigers impressive half-back line.

Rising higher upfield, Nick Vlaustuin, Liam Baker, and Bachar Houli pressed higher upfield and cut out the Eagles bombs inside 50, with Vlastuin taking six intercept marks in the first half. Richmond were superior, turning the ball over in midfield, and rebounded back at the Eagles, getting the ball to goalkicker Jack Riewoldt who kicked a brace of goals in the opening term.

Coming off the back of a career-best performance last week, Eagles captain Nic Naitanui stood up in midfield, and quite literally pulled the West Coast back into the game, snapping a brilliant kick through the sticks to cancel out Riewoldt’s goal.

Although Marbior Chol asked questions of him throughout the match, the All-Australian ruckman’s showed off his physicality throughout the match, collecting the ball off the stoppage and driving at the Richmond defence, bumping off bodies, while finding Josh Kennedy inside 50 who kicked the first of two quickfire goals.

Leading at quarter time, the Eagles came out at pace, with Kennedy starring once again with some brilliant transition play, moving the ball upfield with a slick one-two with young forward Jamaine Jones. Collecting the ball on the edge of the Richmond 50, Kennedy pumped forward and found Jamie Cripps ahead of the sticks who made no mistake scoring his first of the night.

The game opened up more in the second term, with both sides slingshotting attacks back at each other. But it was the Tigers who took the game into another gear through the mercurial skills of 3-time Norm Smith Medalist Dustin Martin.

Capitalising on some poor Eagles defending, Martin snapped through a brilliant goal, initiating a succession of four goals that put the Eagles on the back foot before the half.

22-year-old Callum Coleman-Jones and Jake Aarts followed with goals, while Tigers veteran onballer Kane Lambert finished off the scoring with a huge kick from the base of the Eagles arc.

At times this season, particularly against St Kilda and the Western Bulldogs, the Eagles have let their heads drop when they’ve conceded multiple goals in a row. But they didn’t let their demons get to them today, immediately bouncing back with two goals from young guns Jamaine Jones and Jake Waterman, reducing the halftime differential to just four points.

In midfield, Jack Redden stood out as one of the Eagles key workers clearing forward seven times, while making 32 disposals during the match. Working well with the ever-impressive Elliot Yeo the pair pressed high upfield to keep the ball in the Tigers defensive half for most of the second half.

It started with Nic Nat 🙅‍♂️
And ended with Liam Ryan 🎯 #AFLEaglesTigers pic.twitter.com/Rx9uptfxwr

After a frantic first half, the game drastically slowed in the third term, with both sides sitting back to take the sting out of the match.

The Eagles advanced higher up the field and pressed on the Tigers but struggled to convert their chances when presented. Richmond meanwhile were much more clinical and broke forward, with Coleman-Jones kicking his second of the match and Jason Castagne breaking free to add to the Tigers score.

Once again, the Eagles bounced back at three-quarter time, and it was the power of Nic Naitanui, shrugging off Jack Riewoldt inside the Tigers 50, to scoop a kick through to Liam Ryan, who made no mistake booting through for the West Coast.

Pressing even higher on the Tigers, the Eagles had more momentum in the final quarter but again missed opportunities and couldn’t get into scoring positions.

Conversely, Richmond broke free at pace with Dustin Martin and Kane Lambert kicking a pair of goals in as many minutes to extend their lead by 22 points.

But the Eagles resilience shone through, and they ramped up the pressure on the fatiguing Richmond side, to score four goals inside the final eight minutes.

Taking advantage of a crumbling Richmond side, Jake Waterman and Jamie Cripps rescued back momentum, kicking two goals from tough angles on the sticks, while Oscar Allen rose high under a huge bomb from Luke Edwards to bring the West Coast within two points of the lead.

Eagles fans will be aggrieved Liam Ryan was robbed of a late freekick, with Marlon Pickett throwing the ball to Kane Lambert inside the 50. But it didn’t matter, with Liam Ryan moments later making having his own say on the match, collecting the ball inside the Tigers 50 to set up Josh Kennedy for his last-minute wonder-goal.

Bending the ball around from the tightest of angles, man of the match, Josh Kennedy, raised the roof on the Optus Stadium to secure four huge points against the reigning premiers.