Eagles Leaders Stand Up In Relentless Win Against Richmond 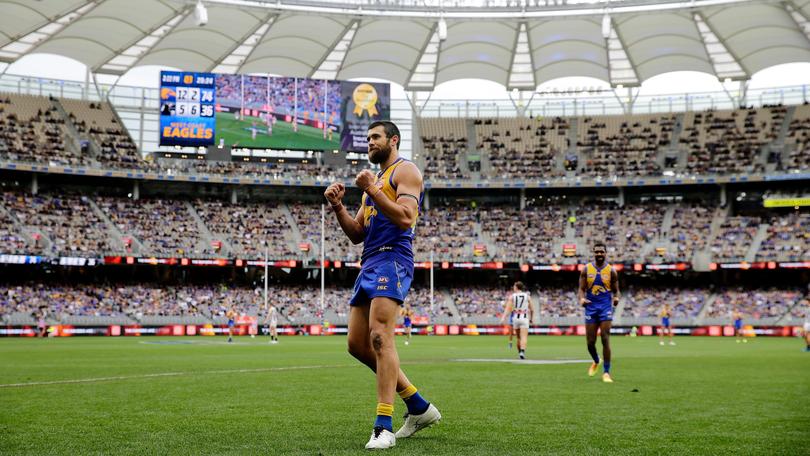 Setting the tone of the match, key players Josh Kennedy and Nic Naitanui stood up to drive the West Coast upfield on Sunday night.

With the game on the line, a place in finals up for grabs, and the Eagles’ chances of making the top four this season hanging in the balance, champion goal kicker Josh Kennedy stepped up to deliver what will go down as one of the greatest goals ever scored in AFL football.

It was simply miraculous.

With less than a minute on the clock, Josh Kennedy cooly whipped the ball around the middle of the posts to win the game for the West Coast, and defeat reigning premiers Richmond.

Big players step up in big games, and Josh Kennedy, who had one of his best games in the blue and gold jersey certainly set the tone for the Eagles yesterday.

The West Coast’s pressure on the ball, work rate, and efficiency inside 50 has looked a lot more clinical over the past two matches compared to previous performances we’ve seen this year. And despite Richmond being in front for the best part of 90 minutes on Sunday, the West Coast’s pressure on the Tigers in the final two quarters was pivotal to helping them shoot four goals in the final eight minutes of the match.

A lot of that pressure has been born out of their leaders, like Josh Kennedy and Nic Naitanui, who took on the mantle of setting the tempo on Sunday.

It’s that leadership that was perhaps been missing from some of the Eagles early losses this season, including in their devastating round six loss to Geelong.

“It was a great game; it felt like a heavyweight battle,” Eagles head coach Adam Simpson said in his post-match press conference.

“And that goal, I mean, who else would you rather have a shot for goal like that? Maybe Dom (Sheed). But I think ‘JK’s’ ability to ice the game like that was very special.

“But there was a lot of work around all that; it could’ve gone either way.

“Either way, I think we played with a lot of spirit. In the last couple of weeks, in particular, our young kids have stood up as much as our leaders, and the collective resolve after losing a couple in a row, I feel like it’s as good as it’s ever been.”

Around the field, key players, Kennedy, Naitanui, Shannon Hurn, and Elliot Yeo, all stood up for the West Coast and had a significant impact on the match.

Yeo was one of the highest pressure players in the Eagles side, mopping up ground balls to amass 20 pressure acts while bombing eight inside 50s into the Tigers’ arc.

His work pumping long balls into Kennedy, Allen, and Darling kept the pressure on the Tigers defenders, who struggled to cope with the Eagles’ advances late in the game.

Likewise, Josh Kennedy’s ability to set up his teammates to record three assists helped keep the Eagles within touching distance of the Tigers in the second quarter.

Kennedy’s movement off the ball is perhaps one of the best in the league, and while he proved he can score big goals, the two time Coleman Medalist also showed he can set them up too; rebounding a brilliant one-two off Jamaine Jones, transitioning upfield, and laying the ball off to Jamie Cripps who made no mistake in converting the set shot.

Engaging in a difficult battle against Marbior Chol at the ruck, Nic Naitanui again led by example in a true captains performance.

Chol got the better of Naitanui, winning a couple of hitouts in the opening ten minutes. But, the All-Australian ruckman visibly upped his game and dominated the stoppage in the latter passages of the game while impressing with his devastating power with the ball in hand.

Naitanui’s physicality is unmatched in the league, and on several occasions during the game, he bumped off multiple tigers defenders, including six-foot-tall forward Jack Riewoldt, to set Liam Ryan up for a goal.

With these Eagles legends setting the tempo, the West Coast’s younger players followed suit to match them. Luke Edwards, Luke Foley, and Harry Edwards all looked composed on the ball and individually had a significant impact on the match.

In particular, last week’s debutant Luke Edwards again proved he is well ahead of his years. The 19-year-old’s vision to find attackers inside 50 is superb, with Edwards having a hand in six score involvements and two goal assists during the match.

“Yeah, Luke Edwards, good player, second game, what did he have? Nine or ten touches in the last quarter and looked composed with the ball,” Simpson said.

“He might even get a Rising Star nomination, which we haven’t had for a while.”

Harry Edwards was excellent under the high ball and performed an important piece of clutch defending in that frantic final thirty seconds of the match to shut down Dustin Martin advancing on the Eagles goal.

“Foley’s composure as well, and Harry Edwards, is a five or six gamer who is holding down a key position defence, albeit on another younger player, but I thought he had his moments as well.”

“So, really pleased we’ve got to play a couple of kids the last few weeks, and we’ve had some success.”

Although it wasn’t the full four-quarter performance as Adam Simpson may have wanted, the Eagles heads never dropped, even after conceding four goals in the second term.

That shows the sign of an improved and much more composed team in contrast to the side that played St Kilda and Geelong at the start of the season.

Their improved resilience may come down a lot to their leaders across the park, who spurred the side on to keep the Tigers locked into their defensive 50.

It was a spirited performance from a side who have put a massive U-turn on their season.