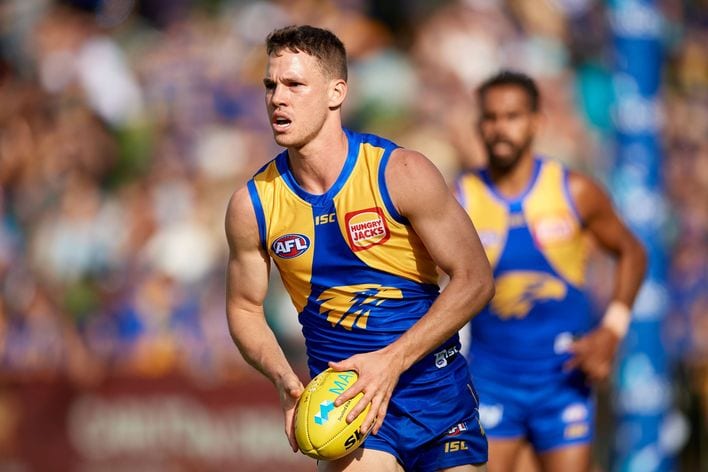 Although a turbulent start to the season for the West Coast, midfielder Jack Redden has stood up as one of the Eagles best players.

It’s been a tough year of injuries for the West Coast Eagles.

Struggling for depth, particularly across the middle of the park, the Eagles have missed several key players during the first thirteen rounds of the season.

Star onballers Luke Shuey, Tim Kelly, Elliot Yeo, and Liam Duggan have all been absent at times this season. And that’s made it a tough time for Eagles selectors, who have had to adapt the team based on their obscene number of injuries.

But their job has been made a lot easier, thanks to several key midfielders who have stood up to take on the mantle left behind by some of the West Coast’s injured leaders.

One of those is West Coast midfielder Jack Redden who has had a blinding start to the 2021 campaign.

Redden, who made his 100th appearance for the West Coast against Collingwood in round five, has impressed this season, recording a suite of career-high numbers while playing out of position for most of the year to cover for his injured teammates.

In the absence of Eagles key stoppage players, Redden has stepped up to play a more central role in the side and has helped to push the West Coast higher upfield, averaging 22 pressure acts and 26 disposals per game.

The former Brisbane Lion has always been a high numbers player, notably having a stand-out season in 2018, taking ten Brownlow votes in the Eagles premiership year, while being ranked inside the West Coasts’ top three for average disposals, tackles, and clearances made per game.

But it’s been a tough couple of years of football for Jack Redden, who struggled towards the back end of the 2020 season with a string of injuries that kept him out of the side.

This season, he looks to be back in the groove of his premiership-winning 2018 season, having posted a new career-high disposal count against Collingwood in round five while also leading the Eagles tackle count, amassing 52 tackles across the opening 13 rounds, notably making ten hits against Carlton in round 12.

Although, as good as his 2021 stats are, his numbers still don’t quite do his season justice.

Typical of the physical wingman from south Australia, Redden has dominated at the contest and has provided the Eagles with more pressure on the ground.

100 games in the blue and gold for Jack Redden!

Take a look at some of his best… pic.twitter.com/MP5piO2a3V

Launching scores from the centre of the park, his work rate has been superb, and he has set the tone for the Eagles young stars this season, including Luke Edwards and Xavier O’Neill, who have thrived from Redden’s ball-winning play.

With Shuey and Kelly returning to the starting lineup over the next few weeks, Redden will likely move back out to his natural position on the wing, yet Redden is still happy to play his part to help the West Coast solidify their place in the finals.

“We are close to full strength now so hopefully it’s a good second half of the year,” Redden told the club website earlier this week.

“Obviously (Luke) Shuey, TK (Tim Kelly), and Yeoy (Elliot Yeo) at the same time being out of the side this year, it allows me to play on the ball a little bit more.”

“I’m just enjoying that and prepared for them coming in. I’ll play probably a bit of a different role and spread the load.

“They’re pretty dominant inside mids. Obviously, that’s their forte and that’s what they’re good at so they’ll be taking that role a little bit more.

“I think definitely I will play a little bit more on the wing.”

The Eagles midfield depth is frightening when looking at the stars they have coming back after this week’s bye.

Jack Redden, Andrew Gaff, and Dom Sheed have all locked down spaces in the Eagles midfield this season, and have been backed by the emergence of young stars, Luke Edwards, Xavier O’Neill.

Meanwhile, Elliot Yeo, Tim Kelly, and Luke Shuey have each missed portions of the year, but are slowly making their way back into the fold with Shuey and Kelly set to be back after the mid-season bye.

And with Shuey having coasted through 80 minutes in the WAFL this weekend, Eagles selectors will no doubt be spoilt for choice come next week’s match against the Western Bulldogs.

“We’ve obviously got some good players coming back after the bye,” Redden said.

“We went through a rough patch there and had a fixture change too, but it’s good to get two wins coming into the bye.”

“At the same time we’ve got a lot of young guys as well and it’s good to get a few games into them as well, that’s good for the club and there will be some tough selection decisions coming back into the club.”

A decision is also still to be made on Jack Redden’s future at the club.

Having joined the West Coast from Brisbane in 2015, Redden will be out of contract come the end of this season, although there’s no doubt the 30-year-old will be offered a new contract in the coming months.

But for Redden, footy comes first, and the Eagles number eight is keeping his focus set on next weekend’s clash with the Western Bulldogs.

“It’s happening in the background, I’m just playing footy and hopefully that’ll get sorted later in the year.”

“We will definitely take a lot of confidence from last weekend going into next week against the Bulldogs.

“It’s another exciting clash and hopefully, we can get the job done and build more confidence going into the back end of the season.”