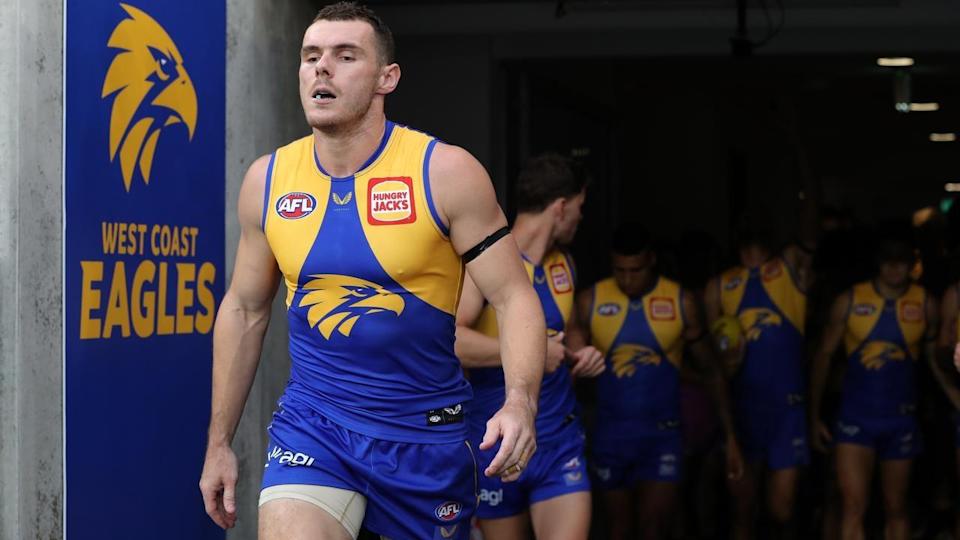 Reflecting on the Eagles Round two loss to the Western Bulldogs, Adam Simpson has shed some light on how teams can beat the Dogs’ powerful group of midfielders.

Dropping league points is something that Luke Beveridge’s Bulldogs side have rarely done this season.

They are currently 10-3, sitting second in the league coming into round 15, and have only dropped points to teams in the top eight, with only their third loss of the season coming in very unfortunate circumstances last weekend against Geelong.

Despite conceding a dramatic ‘after-the-siren’ match-winner from the boot of Cats’ clutch kicker Gary Rohan, Adam Simpson believes the circumstances of the loss will have no bearing on the Bulldog’s ability to perform this weekend.

In fact, it’s likely to get the Dogs snarling even more.

“They’re the real deal the Bulldogs,” Simpson said in a press conference on Thursday.

“Looking at the vision they could have won that game on the weekend against Geelong. They’ve lost to three top four teams throughout the year, and they’re in a good space.”

“They’ve obviously got a lot of confidence in their system, got plenty of talent, and they work their backsides off. So when they play and where they play; I’m sure they’re not worried about at all.

“Obviously we hold them in really high regard.”

Having their best season since their 2016 premiership year, the Dogs have blown away the league with their rabid group of midfielders who have torn teams apart both at home and away.

Marcus Bontempelli, Tom Liberatore, and Jackson Macrae each averaged over 30 touches against Geelong, despite still losing the match, and have been three of the Dogs’ most influential players this year.

Bontempelli, in particular, has stood up as their best on the ground, being perhaps the most dangerous playmaker in the league this season, ranking first in the AFL for kicks inside 50 and fourth for goal assists per game.

The Dogs’ quality in midfield must be a coaches nightmare. It’s almost impossible to plan and implement a strategy against these types of players, especially when the Dogs have so many of them of similar quality. On reflection of the Eagles round two loss to the Dogs, Simpson admitted that the Eagles had a game plan to tail marquee midfielder Bontempelli. But it didn’t quite go to plan.

“We actually ran with him a little bit through that game, and he still found a way to get through. So yeah, we’ve got an eye on that. Lately, other teams have been running with Liberatore, so that shows you his value as well,” Simpson said.

“And then Macrae is averaging 30 something touches as well. So it’s definitely something that we’re aware of, and like I said, you either take one or two of them out, or you play a different system, or you back your own one in.”

Annoyingly for the Bulldogs, they will be without three A-graders for Sunday’s match. Ball carriers Laitham Vandermeer, Josh Dunkley, and Adam Treloar are all set to miss out on the next five weeks of the season due to injury.

But even without these players, the depth of quality the Bulldogs have at their disposal is still frightening. As Simpson states, if one player is nullified in the game, another pops up in their place, and that’s a very difficult thing to try and defend.

“It’s not just their midfield group; it’s the whole way they play and the way they flick the ball around as well.”

“There’s just so many great players. Like most good teams, you stop one, and another one will bob up. I’m sure that’s the attitude they have, and that’s what we want to have down the track too. We’ve got a pretty good midfield now too.”

The Eagles will welcome back four of their most experienced players this weekend, which Adam Simpson gratefully admitted is a pretty nice selection dilemma to have, considering the number of injuries the Eagles have had to deal with this season.

Luke Shuey, Tim Kelly, Jeremy McGovern, and Brad Sheppard will all return to the starting lineup to bolster the Eagles in midfield and in defence.

Emerging midfielder Luke Edwards, who has seriously impressed this season, will start on the bench, adding to the Eagles quality in the centre of the park. But after filling in for the Eagles experienced players for most of the season, young stars Harry Edwards, Luke Foley, and Xavier O’Neill have all been dropped this week.

“Some of the guys deserve to play, and they should, and they will. But some guys are a bit unlucky, and that’s just the way it is. It’s a good problem to have. We haven’t had that problem for a while,” Simpson stated.

The future looks bright for Adam Simpson’s side, and it looks as though the Eagles are not far off emulating the Dogs’ depth in midfield, with the side having shown real growth as a unit this year to overcome some difficult challenges.

“I think we’ve had some real growth with some of the young players coming through this year.”

“You need to have a squad mentality, everyone knows that, and with our injuries being to significant players, there’s been good growth. It’s good to have our leaders back, but we’ve been really happy with some of the kids as well.”

This weekend, the Bulldogs will try to overpower the West Coast and take every opportunity they can to swing momentum back on the Eagles. Their fast-moving style of play, getting bodies to each contest, and opting to handball instead of kick, has been very lethal this season.

Simpson addressed that it’s very difficult to arrest that type of momentum when teams get going. But with the addition of four leaders returning to the Eagles 22, combined with their added confidence coming into this match, the West Coast stand a very good chance of stopping the Dogs from getting going this weekend.

“It’s really hard to stop momentum, just like Richmond had with us,”  Adam Simpson said.

“Trying to find ways through leadership and process to stop a team with a run-on is something we’re all looking for.”

“For us to qualify for finals, these types of games are big. I think we hung in there against the tigers, and we showed some really good resilience and spirit, and we’re going to have to do the same with the bulldogs.

“They win more than they lose, so it’s a massive challenge for us. But the guys are up for it.”