Eagles Team News: Simpson Gunning For More Pace At The Back 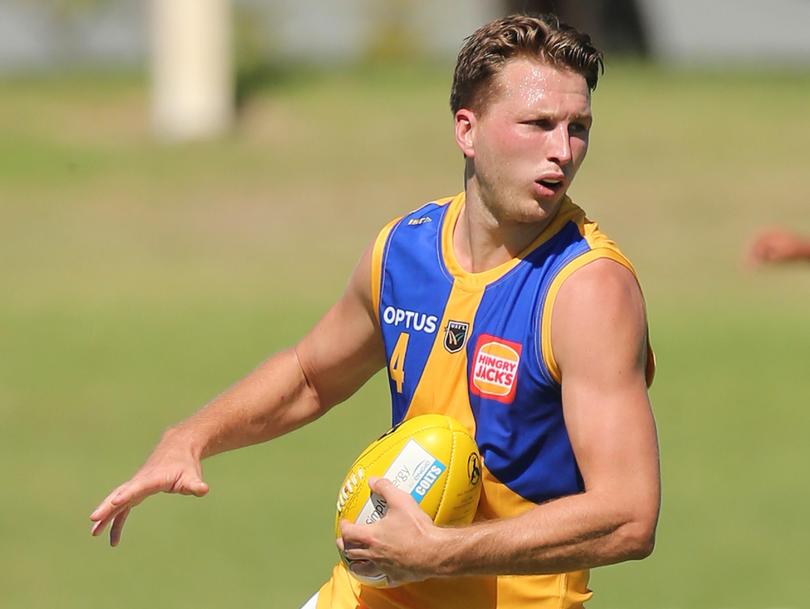 Adam Simpson has made five changes for Sunday’s Round 16 clash with the Sydney Swans at Kardinia Park.

New recruits Zac Langdon and Alex Witherden will both come into the side alongside ruckman Nathan Vardy, speedster Jamaine Jones, and young half-back Luke Foley.

Jake Waterman, Luke Edwards, Jack Petruccelle, and Josh Rotham will all move to the emergencies list, while Jackson Nelson (omitted) and Liam Ryan (suspended) will not travel with the squad.

The additions of Witherden and Foley indicate that Adam Simpson is looking to add more pace coming through from the backfield, after the Eagles were pressed into their defensive 50 for the majority of last Sunday’s dissappointing loss to the Western Bulldogs.

It seems Adam Simpson is anticipating the Swans to do the same this weekend.

With the Eagles failing to find any link-up between their backs and forwards during that match, the addition of rebounding half-back Alex Witherden could fill that gap, to transition the ball into the higher upfield and away from the Eagles danger zone.

Having suffered a groin injury back in May, Witherden hasn’t featured for the West Coast Since their round nine win against the Crows.

But over the past two weeks, the rebounding half-back has made his return to footy in the Eagles WAFL side, helping them turn their disappointing start to the season around with two big wins against Subiaco and East Fremantle. He’ll now start on the bench for the Eagles and will add will work to help alleviate pressure on the West Coast’s backline.

Small forward Zac Langdon will join Witherden on the bench, after scoring a hattrick of goals for the WAFL side in their win against East Fremantle last weekend. Langdon has struggled to cement a place in the first team this year, but his pace and ability to win groundball contests around the park will be much needed this weekend against a hard-running Sydney side.

Nathan Vardy, who hasn’t featured for the Eagles since round seven, will also return to the senior side to share the rucking duties with Nic Naitanui.

Nic Naitanui has been playing out of his skin over the course of the last five rounds, but has played perhaps more minutes than we expected this season. With Vardy back in the side, we Naitanui’s game-time could become more managed from this weekend, and the All-Australian ruckman may be encouraged roam a little more freely around the park, with Vardy hitting out at the stoppage.

Allen will be joined in the full-forward line by small forward Jamaine Jones, who will come in as a straight swap for Liam Ryan.

After recklessly making contact with Bulldogs defender Jason Johannisen’s head last weekend, Ryan has been suspended for this weekend’s match, allowing Jones, who has impressed for both the Eagles senior side and WAFL team, an opportunity to win a more regular spot in the Eagles 22.

Meanwhile, Sydney will make two changes to their side who just missed out on a win against Port Adelaide last week. Defender Kaiden Brand and gun forward James Rowbottom will be replaced by young forwards Nick Blakley and Sam Wicks, who will link up with an already prolific Swans forward line, spearheaded by tall goal kicker Lance Franklin.