Round 16 Match Preview: Eagles vs Swans 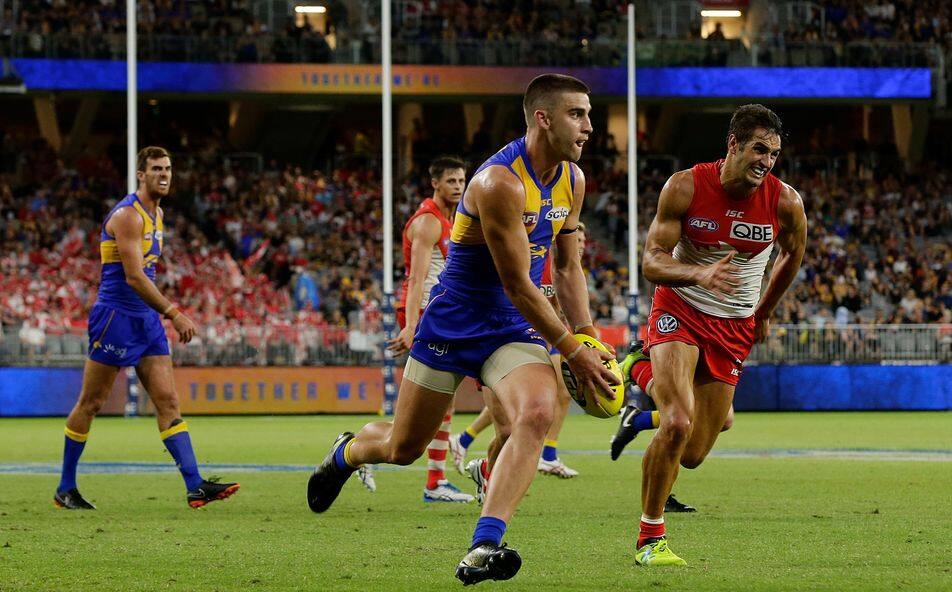 The West Coast Eagles look to end their 15-year hoodoo at Kardinia Park this weekend as they take on the Sydney Swans on Sunday for the HMAS Sydney II Commemorative Trophy.

Sunday’s round 16 clash between the West Coast and Sydney will commemorate 80 years since 645 Australian navy personnel lost their lives when HMAS Sydney II was sunk in 1941 off the west coast of Australia.

The fixture is usually fulfilled at either the Optus Stadium or the SCG, but due to coronavirus outbreaks in New South Wales, the Eagles and the Swans will this year compete for the HMAS Sydney II Commemorative Trophy at Kardinia Park in Victoria.

Both sides come into this clash off the back of tough losses against Port Adelaide and the Western Bulldogs and sit in sixth and seventh place in the league, level on 32 points.

That makes this Sunday’s match a pivotal eight-point crunch game.

And while the Eagles have not won a match at the GMHBA Stadium in 15 years, they’ll be keen to undo their curse at Kardinia, especially after last weekend’s disappointing 55-point loss to the Western Bulldogs.

“Obviously, we didn’t play well against Geelong there a few weeks ago,” Adam Simpson said in a press conference on Thursday.

“My expectation is that we go down there off the back of a poor performance, and we play as well as we can against a side who’s above us in the ladder.

“I don’t care where we play. We need to perform well to beat Sydney, and that’s our objective.”

Winning 30 more contested possessions throughout the match than the Eagles, the Bulldogs swarmed the contest and tore away from the Eagles to boot six goals in the final quarter. It was a poor showing from the Eagles, who struggled to maintain possession and gain field position with the Dogs hemming the West Coast back into their own half for most of the match.

But the Eagles know how to turn things around after a tough loss, having demolished Fremantle after their 97-point loss to Geelong earlier this season.

We expect them to do the same against Sydney this weekend. Fielding a much faster team compared to last week, the inclusions of Alex Witherden, Zac Langdon, and Jamaine Jones show that the Eagles are looking to retain possession and create better linkup with their tall forward lines.

The unfortunate news for the Eagles is that they’ll be without leading disposal maker Andrew Gaff, who was omitted from the side this morning with a hand injury. He’ll be replaced by young midfielder Luke Edwards who impressed in the Eagles round 13 win against the Tigers.

How Do You Beat The Swans?

Like the Eagles, Sydney have struggled with consistency this year.

While they’ve had some huge results, claiming big wins against the Tigers, Lions, and Geelong, they haven’t been nearly as clinical as they should have been this season.

Throwing away a few winnable matches to the Giants, the Suns, the Dockers, and the Hawks, Sydney have struggled when teams put them under pressure, and that’s how the West Coast need to approach the game on Sunday.

Defensively the Swans haven’t been the most secure team at the back, leaking goals late on in their match against Port Adelaide while succumbing to the pressure of Hawthorn’s high attacking line the week before.

The key battles for the Eagles will be nullifying Lance Franklin in front of the sticks while tagging experienced midfielders Luke Parker and Callum Mills in the centre of the park.

Franklin has been one of the Eagles worst nemeses over the last few years, averaging four goals every time he plays against the Eagles. And worryingly for the West Coast, he’s been in very good form of late, shooting a quartet of goals against Port Adelaide last weekend.

Tom Barrass will likely mark the 199cm monster of a full-forward, and we’re expecting this to be a mammoth of a battle in the backfield. Barrass is eighth in the league for intercept marks and has impressed this season with his abilities under the high ball so should stand up against any bombs coming into Franklin.

The real question is whether the Eagles can retain possession from those intercepts and shift the ball forward at pace away from the Swans midfielders Luke Mills and Callum Parker.

They are two of the best onballers in the league, with Parker amassing 34 disposals and ten clearances in their loss to Port Adelaide last weekend, while Mills kicked forwards into Port Adelaide’s 50 nine times during the match.

Shutting these two players down at the stoppage will be key for the Eagles this weekend, and they’ll rely on Jack Redden and Elliot Yeo to do that job, pressing higher into the Swans defensive half of the field.

All-Australian ruckman Nic Naitanui will also have to be on his game at the stoppage this weekend coming up against former rucking partner Tom Hickey who will know Naitanui’s game inside out. Hickey will no doubt be receiving a few tips on how to handle the Eagles marquee ruckman from Swans’ assistant coach and former mentor to Naitanui, Dean Cox.

“He’s a very knowledgable ruckman, and he knows my game plan and how I play really well,” Naitanui said to the Eagles club website on Thursday.

“And he’s got a bloke who is even better in Dean Cox coaching him. It’s going to be a tough ask, but I guess it’s going to be exciting as well with two teams from interstate playing down in Geelong, which we would never have seen coming in the past.”

While Naitanui will have to battle at the Ruck, the West Coast midfield will need to do much better at the stoppage this weekend to provide service to their tall forward line. The Eagles are currently last in the league for winning pre-clearance ground balls at the centre bounce and need to pick their game up this weekend if they are to utilise their tall forward line.

With both teams coming into this match following multiple tough losses, both are primed and ready to play their best footy and put a lot of pressure on their opposition. With eight points on the line, Adam Simpson and John Longmire will be emphasising the importance of a win in this match to both of their sides.

It’s a tough one to call. If the Eagles can move the ball into their forward 50 and be more accurate with their shots at goal, they stand the better chance of taking this game away from the Swans.

For the Swans, it depends on what team turns up on Sunday. They are a young side with a string of experienced players like Tom Papley, Lance Franklin, Callum Mills, and Luke Parker, and whether they can arrest momentum off the Eagles this weekend will come down whether they can win the contest higher up the pitch.