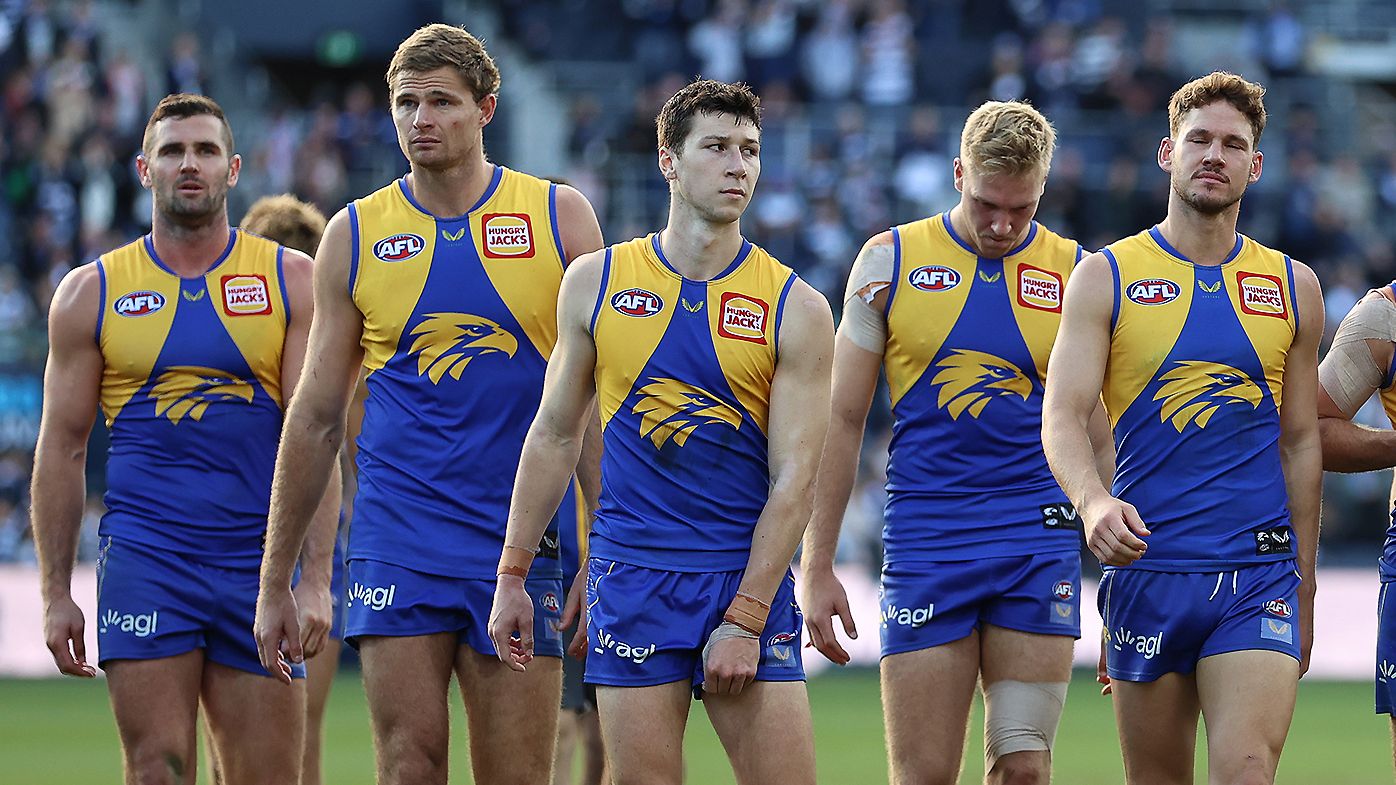 Yesterday’s 92-point loss to the Swans felt like deja vu.

For the second time this year, the Eagles succumbed to another 90-point demolition by a top-eight side at Kardinia Park.

It seemed as though we were reliving the Eagles’ horror away loss to Geelong in round six, with Sydney stunning the West Coast with their frightening pace and slick handball work.

For the West Coast, their last two performances just haven’t lived up to the billing. Their 55-point loss to the Western Bulldogs in round 15 was bad enough. But to go down again in such a mediocre way to a team they were level on points with is concerning.

What was so disappointing was how off the pace of the game the West Coast looked compared to the Swans. On paper, Sydney have as much talent in their starting lineup as the West Coast do. And after last weekend’s disappointing loss to the Dogs, we had full faith that the Eagles would come out firing to win this pivotal eight-point game.

But now, their flag hopes are a serious doubt, and a massive question mark currently hangs over whether the West Coast can keep their position inside the eight to even make finals this season.

Maybe the Eagles are doomed when playing at Kardinia Park, a ground which favours flowing handballing football and doesn’t cater to the Eagles’ kick marking style of play. But it was the Eagles inability to revert to a Plan B that cost them on Sunday.

That has been a recurring problem for the West Coast this season. Failing to fall back on another game plan as soon as they come under the pump from their opposition still remains a big problem for a side that should be sitting much higher up the ladder than their current league position suggests.

Adam Simpson has spoken in detail this season about how the Eagles have struggled to arrest momentum from fast-moving sides, who can devastate teams in broken play.

Looking back on some of the West Coast’s losses in 2021, the Eagles struggled in round four to slow down a resurgent St Kilda late in the fourth quarter of the match. They then struggled to play against a fast-moving Geelong side, who were the first to demolish the Eagles at Kardinia Park. And last week, they couldn’t hold up against the pace and power of Dogs’ midfielders Tom Liberatore, Marcus Bontempelli, and Bailey Smith, who transitioned the ball quickly into space.

Yesterday, the Swans moved the ball so fluidly through open space and had what seemed like more time on the ball compared to the Eagles. That allowed them to drop the hammer and bomb 20 more inside 50s than the West Coast during the match.

Key forward Lance Franklin continued his scoring streak against the West Coast, booting a hattrick of goals. In midfield, Callum Mills, Luke Parker and Joel Amartey showed their brilliance to break into the Eagles defensive 50 and cause chaos for the West Coast defenders.

When it comes to shutting down these attacks, work rate is key, and as Adam Simpson stated in his post-match press conference, the Eagles have struggled to twist momentum against top-quality sides this season, partly because their work rate hasn’t been up to scratch.

“That’s now a pattern,” Adam Simpson said following yesterday’s match. “We’ll assess that… we’ve got to look at some of the things we’re doing, and some of it is work rate and being clean.”

“We’ve identified that’s an area we really want to focus on, we’ve been training it for a few weeks, so hopefully that comes to fruition sooner rather than later.

“But that inability to stop momentum is costing us dearly.

“We just don’t look as connected as we have been in the past with how we defend and how we move the ball. Part of that is (being) willing to work, so we need to get hold of that.

“We’ve got to look at all aspects.”

All things considered, Tom Barrass and Brad Sheppard did work well at the back to put Franklin and Tom Papley under pressure. Despite conceding 18 goals, Sheppard had Tom Papley on toast for most of the Match, while Tom Barrass, although he did float off Lance Franklin at times, did a pretty decent job of spoiling and intercepting bombs coming towards the Swans’ key forward.

But defensively, the Eagles field positioning, decision making, and man-marking were all second rate.

Swarming in numbers, the Swans looked as though they had an overlap of players on every attack. They were also allowed far too much time on the ball inside the Eagles’ defensive 50.

Getting caught on the break and failing to track back have been two of their biggest problems this year, and teams know if they can break up play and run with the ball into space, they can find openings inside the Eagles’ defence.

Being ranked 17th in the league for tackles made and least opponent handballs per game, the West Coast need to work harder to close gaps in the field and stop teams from playing an aggressive handballing brand of footy.

The Eagles’ work rate while in possession also let them down on Sunday.

Going down by five contested possessions during the match, it’s fair to say the West Coast did work hard to win the ball around the park, an improvement on their – 30 disposal deficit against the Western Bulldogs last weekend.

Having done the hard work to win the football, the Eagles then struggled to find passing options around the field. But that wasn’t down to a lack of creativity. It was a lack of movement.

“Do they pick and choose too many times? Do they actually care enough?”

The Swans were outstanding, but there are questions to be asked of the Eagles. Plus, more of the fallout from round 16 in Access All Areas.

On several occasions during the match, we saw Alex Witherden and Shannon Hurn scanning the field to find a kick pass outside their defensive 50, but instead resorted to clearing the ball upfield and losing possession to a prowling pack of Swans midfielders.

The problem was, no one was offering themselves up to receive the ball in space. Granted, the Swans made it very difficult for receivers to get open in the middle of the park, but it seemed like the Eagles struggled to use the ball cleanly, got frustrated, and failed to dispose of the ball efficiently.

Former North Melbourne player David King concurred and criticised the West Coast during the match, claiming that “they just don’t know what to do with the football.”

“The Swans are running harder, and they have much more options to use,” King said on Fox Footy.

At times, it seemed as though the Eagles had no system for how they wanted to play with the ball in hand.

Throwing risky passes playing the ball backwards, the Eagles receivers had no options to transition the ball upfield, and that came down to their low work rate to present options in attack accompanied by the Swans pressure on the ball.

Responding To That Pressure

The best football teams in the League are those that can twist momentum on sides when they’re under the pump.

Look at Richmond in last year’s grand final, for example, and how they dragged themselves back into the match against Geelong in the second half.

Having a Plan B or a get out of jail card is something that the West Coast have lacked this season.

What’s worrying for the Eagles is how many times they’ve suffered really heavy losses or have faded out of matches in 2021.

Frustratingly, we know this Eagles side have it in them to revert to different systems depending on how the game is panning out. They showed that in their emphatic win against Richmond, continuing fight back after going four goals down to the Tigers in the second term.

Yesterday the Eagles’ confidence just wasn’t there, and credit should go to Sydney for stopping the Eagles from playing to their usual kick-marking systems.

Being the number one side in the league for tackles and pressure applied, the Swans knew how to smother the West Coast when the Eagles had possession and cut off their supply to their tall forward line.

Once they took that away from the West Coast, Adam Simpson’s side struggled to get anything going from the back, and similarly to last week’s loss against the Bulldogs, got turned over in compromising positions.

If the Eagles are to become a premiership-winning side, I think they need to add more strings to their bow to counteract the aggression that fast running sides like Sydney and the Western Bulldogs bring.

That comes to how the Eagles work to defend against teams and how they work to open up space around the field when they have the ball in hand.