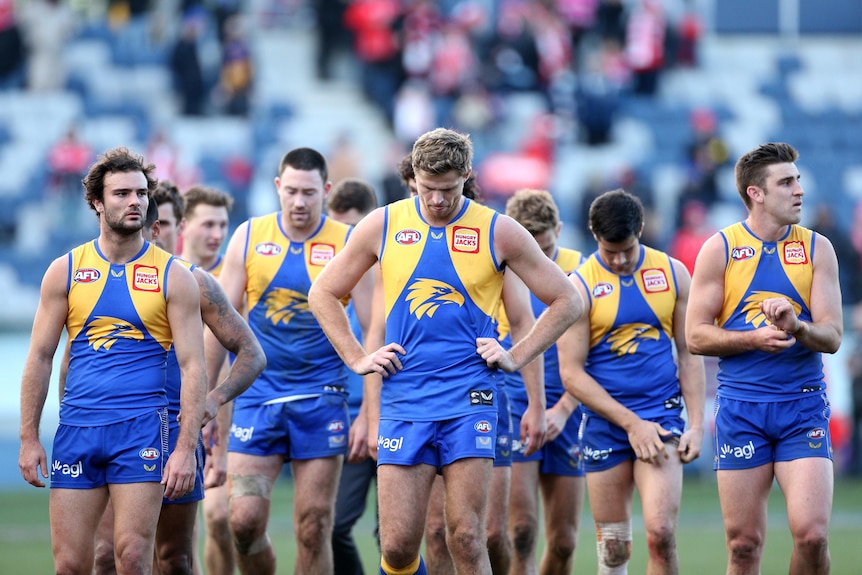 West Coast midfielder Elliot Yeo believes it’s not time to sound the alarms on the Eagles season just yet.

It’s been a dire two weeks for the West Coast Eagles, succumbing to two brutal defeats at the hands of the Western Bulldogs and Sydney Swans.

The poor results have sparked a lot of speculation around the Eagle’s finals credentials this season, with the West Coast now teetering on the edge of the top eight, just two points ahead of GWS and four points ahead of Richmond, Fremantle, and St Kilda, all tied for ninth place.

But for key midfielder Elliot Yeo, the Eagles aren’t at DEFCON 1 just yet.

“We’re not panicking because we know what’s letting us down in the end. We just need to rectify that and try to put our best foot forward as a team,” Yeo told 96FM this morning.

“We’re just losing a little bit of connectedness and work rate, really. Those are probably two things that we need to get better at, but there are a lot of other things too.

“In the end, they just ran away with it. We were struggling to try and hold onto their momentum, and I think that’s been a thing for us over the last year or two, and I think a lot of teams are finding it extremely difficult to stop teams and their momentum.”

Sunday’s loss was concerning for the West Coast, who did look off the pace for a lot of the match. Sydney got more bodies forwards in attack and inhibited the Eagles from playing their kick-marking game plan.

Eagles coach Adam Simpson identified the Eagles’ poor work rate as a big issue in his post-match press conference. But the disruption of welcoming back a string of key players to the side seems to also have upset the connectedness of the squad over the past fortnight.

It goes without saying that you cannot leave players like Luke Shuey, Tim Kelly, Jeremy McGovern, and Brad Sheppard out of any side. They are simply world-class.

Yet, bringing them all into the squad at once might have disrupted the Eagles’ cohesion.

The same issue was touted after the Eagles 2020 elimination final loss to Collingwood last year, where the West Coast brought back several key players from injury, who arguably disrupted the cohesion of the side to the side.

But looking towards the back end of the season, two-time All-Australian Elliot Yeo isn’t panicking about the Eagles chances of making finals this year.

“We’ve played two bad games, and they’ve been two bad losses, and for the rest of the season, we’ve actually been pretty good other than the odd game here or there.”

“It’s not panic stations just yet.”

Yeo was one of the Eagles best afield at the weekend, recording 26 touches, eight tackles while kicking his first goal for the Eagles in over 12 months.

Although disappointed with the result, the positive news is that Yeo is making great strides to being back to his form of old after his extensive injury lay-off.

“The wind down there (in Geelong) was doing a fair bit. I just thought I’m going to kick it as low and as hard as I can and try and put it through the sticks,” he said, reflecting on his outstanding goal in the first quarter.

“Luckily, it went a bit straight, but I reckon if I kicked it any higher or any softer, it would have gone out on the full.”

“Yeah, I was pretty happy with that but really, really unhappy with the result in the end.

“In the end, we need to get better, it’s genuinely not us, and it’s a bit uncharacteristic.”